Which of these penny cannabis stocks is the better buy right now?

Cannabis, in many ways, became a legitimate investing arena in 2018. Even so, the nascent cannabis space still has a long way to go before many of its most serious risk factors are a thing of the past. Fortunately, there are a handful of companies operating in less controversial cannabis-related areas that offer substantial growth opportunities for investors. 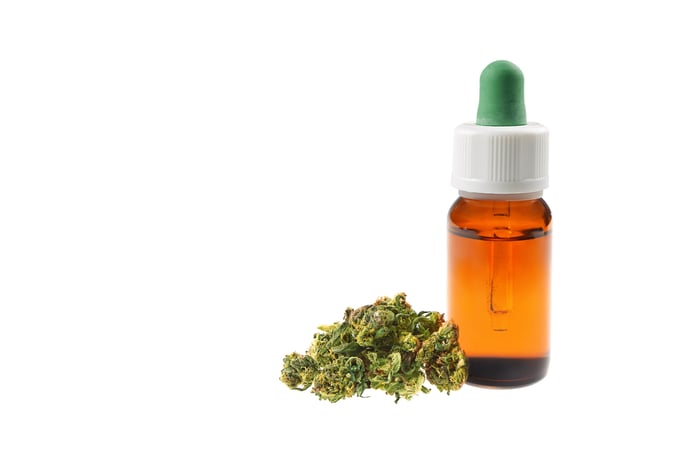 The passage of the 2018 Farm Bill is undoubtedly a watershed moment for companies like Medical Marijuana that produce and market cannabidiol (CBD) oils. The big deal is that this legislation amended the Controlled Substances Act of 1970 to legalize so-called "low THC" products, aka "hemp."

Equally as important, CBD oils have gone from being viewed as snake oil in the eyes of many consumers to legitimate alternative therapies for a wide variety of ailments. Consumers are reportedly turning to CBD oils as treatments for common conditions such as arthritis and skin rashes, and even more serious medical problems like post-traumatic stress disorder and severe forms of epilepsy.

As a result, the Brightfield Group, a cannabis analyst firm, has this key secondary market pegged as one of the fastest growing areas within the entire cannabis space. For example, Brightfield estimates that CBD oil sales could reach a whopping $22 billion as soon as 2022. Medical Marijuana thus appears to be in a prime position to capitalize on this rapidly emerging commercial opportunity, especially as one of the leading pioneers of the CBD oil revolution.

Unfortunately, Medical Marijuana does have some noteworthy drawbacks as a CBD oil investing vehicle. Chief among these problems is that the company's stock is priced at less than a dime at current levels, thanks to its absolutely staggering amount of outstanding shares. So, despite the company's entrenched competitive position, it may have serious trouble attracting blue-chip investors -- a key ingredient for share price appreciation.

Because the American cannabis market has evolved in piecemeal fashion -- state by state with highly different and ever-evolving regulatory landscapes, this key commercial space has become extremely fragmented. In short, there are already numerous independent growers and dispensaries, resulting in myriad types of cannabis products across the country.

Industry insiders, for example, estimate that there are now several thousand brand-name dried flower varieties, edibles, and other secondary products currently available in the U.S. market. And until lawmakers end federal prohibition, the U.S. cannabis market is unlikely to begin a much-needed consolidation phase in any real form or fashion.

However, MariMed, a highly diverse cannabis-services company, has turned this chaotic business environment to its advantage. Instead of attempting to focus exclusively on brand development, MariMed has also built a professional services business that advises potential growers and distributors. As proof of MariMed's success in this endeavor, the company now has fully functional operations in several U.S. states, including Delaware, Illinois, Maryland, Massachusetts, Nevada, and Rhode Island.

And building off of its early success in the cannabis consulting arena, MariMed recently expanded into the hemp market through a $30 million investment in GenCanna. So, like Medical Marijuana, MariMed also stands to benefit enormously from the passage of the 2018 Farm Bill going forward.

Still, MariMed's stock has some considerable logistical issues that need to be understood prior to buying shares. Specifically, the company's stock is listed on the largely unregulated over-the-counter exchange, and its share price is currently below $5. As a result, MariMed will probably have trouble building a solid base of top institutional and blue-chip investors for the time being.

If for no other reason, MariMed's stock is the better buy here simply because it has a far lower share count and a markedly higher share price as a result. Business prospects aside, Medical Marijuana's ginormous share count is almost certainly going to hinder the near-term appreciation of its stock.

That said, MariMed definitely isn't a stock for conservative investors. The company needs to vastly improve its capital structure and uplist to a major exchange before it can truly be considered an "investment" rather than a speculative cannabis play. In other words, this penny cannabis stock is arguably only suitable for super-aggressive investors who are comfortable with sky-high levels of risk.