A slump in China and concerns in the U.S. hurt lots of auto-related stocks last month.

Investors in Gentex (GNTX -2.77%) had a rough ride in December. Shares of Gentex, a leading global supplier of automotive mirrors and related displays, dropped 10.3% last month, according to data from S&P Global Market Intelligence.

We can probably attribute quite a bit of Gentex's December decline to the broader market sell-off: The benchmark S&P 500 Index was down just over 9% on the month. But there's probably another worry on the minds of Gentex investors: the growing possibility of a big slowdown in car sales in key markets around the world. 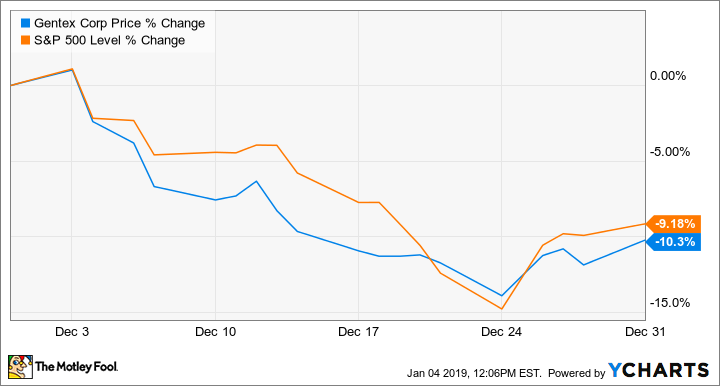 Gentex was far from the only auto-related stock to drop by double-digit percentages in December. Shares of all three of the Detroit automakers declined by more than 10%, as did those of key suppliers closely linked to the slumping Chinese new-car market. A Gentex rearview mirror that uses cameras to provide an unobstructed view behind the car is offered by GM on several models, including the Cadillac CT6 shown here. Image source: General Motors.

Gentex makes high-tech automotive rearview mirrors. If your car's mirror does anything more than reflect light -- like dimming itself at night or displaying information -- odds are high that Gentex made it. The company owns about 90% of the global market for such mirrors, which are very common in upscale and luxury vehicles in the U.S., Europe, Japan, and China.

Obviously, a slump in auto sales that leads automakers to cut production will hurt Gentex's sales as well. Given that passenger-car sales in China fell 16% in 2018 and that the late-November announcement of a major restructuring at apparently healthy General Motors (GM 4.03%) has investors worried that a slowdown in the U.S. could be looming, it's no surprise that Gentex's stock took a heavy hit in December.

Gentex will report its fourth-quarter and full-year 2018 earnings results before the bell on Wednesday, Jan. 30. We'll learn more about the state of its China business and Gentex's expectations for 2019 at that time.

This Dominant Manufacturer Could Offer Shelter in a Market Storm

How to Invest in Car Stocks