Apple's slow-but-steady marathon approach to wearables is overtaking Fitbit on its sprint toward smartwatches.

Wearable technology isn't quite ubiquitous yet, but devices such as smartwatches have been steadily growing in popularity among consumers. Market research firm eMarketer estimates that in 2019, sales of wearable devices will increase by 9%, and that more than 1 in 5 Internet users in America will utilize one.

It should therefore come as no surprise that tech investors are keeping a close eye on two of the top wearable tech stocks right now -- Apple (AAPL 0.00%) and Fitbit (FIT). But while both companies are making big bets on wearables, Apple is much more likely to succeed with its devices over the long run. Here's why. 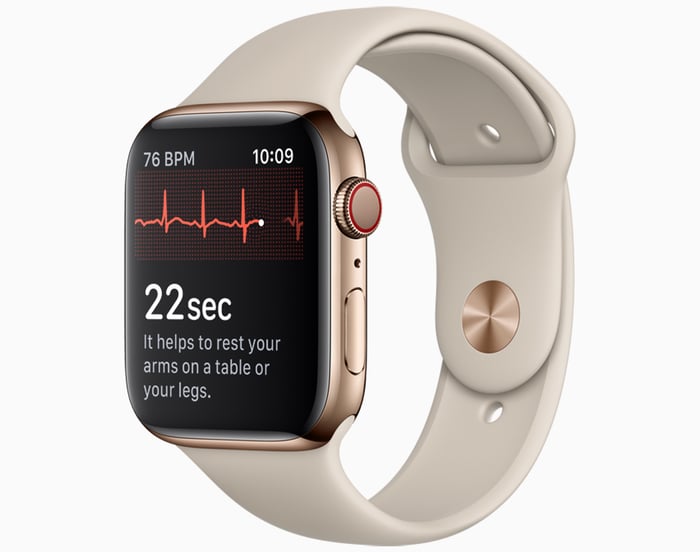 Fitbit took an early lead in the wearable tech space, but it has lost much of its market share, with the Apple Watch taking the lion's share of the high-end smartwatch sales, while China-based manufacturers gained ground in the low-end fitness tracker market. The latest data available for from IDC shows that in wearables overall, Fitbit held just 10.9% market share in the third quarter of 2018, down from 13.7% in the year-ago quarter, and below both Apple's 13.1% share and Xiaomi's 21.5% market share.

Fitbit is putting a lot of effort into its smartwatches these days, a departure from its original focus on fitness trackers. In Q3, the company said that its latest smartwatch, the Versa, sold 1 million units in the two months after its launch. That was great news for the company, as was the fact that its overall wearable sales increased for the first time in two years.

But despite that, Fitbit has been unable to keep pace with the giant in Cupertino: Apple shipped an estimated 4.2 million smartwatches in Q3, while Fitbit shipped a total of of 3.5 million devices -- including smartwatches and fitness trackers -- according to IDC. The difference between those two numbers may not seem all that big, but Fitbit's shipment totals are moving in wrong direction, and are down 35% from two years ago.

Chinese vendors are flooding the market with inexpensive fitness trackers, while Apple is dominating the high-end wearable market with its Apple Watch. This leaves Fitbit under pressure from all sides, and makes it more difficult to find a niche for itself. Investors have taken notice of Fitbit's rising competition -- and its slowing shipments -- and have responded by sending its stock price down more than 80% over the past three years.

Apple's slow climb up the wearable tech ranks with its Apple Watch has happened without much fanfare, but that doesn't mean it's not important. The company's smartwatch shipments grew by an impressive 54% year-over-year in the most recent quarter. Nearly every version of the Apple Watch has added significant new features users want, with the latest Apple Watch Series 4 sporting a new heart rate sensor that can take an electrocardiogram. And just a year prior, the company added cellular connectivity to its Watch, allowing it to make and receive calls without needing to be paired with an iPhone.

But the Watch isn't the only wearable device in Apple's catalog. Its AirPods and Beats headphones also fall under that category, and it's becoming increasingly clear that the company has a lot of room to grow this segment. In the fourth quarter of fiscal 2018, Apple's wearable sales increased by 50% year over year. That stellar performance makes wearables Apple's fastest-growing business right now.

Additionally, Apple may have a massive new revenue opportunity if it launches its rumored augmented reality glasses. The company is reportedly working toward a launch date near the end of 2021 for the device, according to former Apple analyst and Loup Ventures founder Gene Munster. If it meets that schedule, AR glasses could add $13 billion to Apple's annual revenue by 2022.

Of course, it's still unclear whether or not the device will move from the development stage to the marketplace, but even if they never see the light of day, Apple's easily outpacing its wearable rivals, including Fitbit,  just a few years after entering the market.

Investors looking for a solid wearable tech stock should strongly considering Apple because of its vast ecosystem of apps and the strong developer network behind them. Wearable technology needs a healthy combination of new sensors and features to lure in customers, but a device family's staying power is built on software and apps. Apple has spent years building out its app platform and making sure its new devices, like the Apple Watch, easily integrate into its ecosystem. Fitbit can't compete with Apple on that front, which is why it will likely continue to fall behind in the coming years.