And the stocks that could win the most from these key developments.

It's time to turn over a new leaf. And for marijuana stocks, 2019 should bring several new leaves to turn over.

The big stories last year for marijuana stocks included recreational marijuana markets opening for business in California and Canada. But what will the important developments impacting marijuana stocks be in the new year? Here are three critical things to watch with marijuana stocks in 2019 -- and the stocks that should be most likely to benefit. 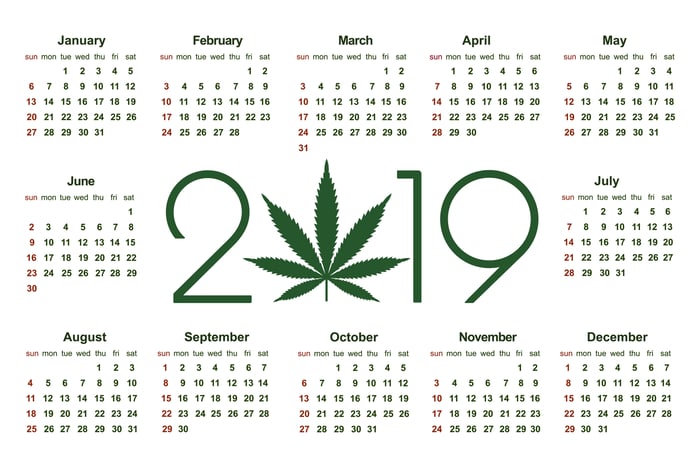 Companies listing their stocks on the larger exchanges such as the Nasdaq, New York Stock Exchange (NYSE), or Toronto Stock Exchange (TSX) can't conduct business in the U.S. and retain their listings. Cannabis companies with U.S. operations have to list their stocks on the relatively small Canadian Securities Exchange (CSE) or trade over the counter. This limits their exposure to investors. In addition, these companies' access to banking services is limited due to restrictive federal laws.

Could efforts to change U.S. federal laws succeed in 2019? It's possible. Sen. Cory Gardner (R-Colo.) and Sen. Elizabeth Warren (D-Mass.), both of whom represent states that have legalized recreational marijuana, are still trying to get a bipartisan bill through the Senate that would change federal laws to recognize the rights of states to enforce their own marijuana laws. A similar bill is being supported in the U.S. House of Representatives. With a new U.S. Congress now in place, the passage of the legislation appears more likely than in the past.

Canada's legal recreational marijuana market opened on Oct. 17, 2018. But the market still isn't anywhere close to reaching its potential size for a couple of key reasons.

First, there isn't enough supply to meet demand. While big and small Canadian marijuana growers alike have scrambled to crank up their production capacity, many expansion efforts won't be completed until later this year or into 2020. Second, Canada didn't legalize every kind of recreational marijuana product in 2018. The country has yet to finalize regulations relating to cannabis edibles (including cannabis-infused beverages) and concentrates.

These two issues make 2019 an enormously important year for Canadian marijuana stocks. The companies that can dramatically increase their capacity the quickest stand to rake in the most sales. And those that are ready to launch new products immediately after regulations allow for the sale of cannabis edibles and concentrates should enjoy another big revenue boost.

But 2018 also brought even more rumors of deals that didn't materialize. There were reports that major alcoholic beverage maker Diageo was looking for a cannabis partner. Even Coca-Cola was reportedly interested at one point in teaming up with a marijuana grower to develop cannabis-infused beverages. However, the year wound down with no deals from either big company.

As you might expect, the deals and rumors of deals excited investors and drove up the prices of marijuana stocks last year. Expect more of the same in 2019 -- deals, rumors of deals, and the associated jumps in share prices. Beverage makers still seem to be the most likely candidates to partner with marijuana growers. However, there's a distinct possibility that more tobacco companies will follow in Altria's footsteps as well.

Efforts to change U.S. marijuana laws, Canada's recreational marijuana market growth and expansion, and dealmaking are likely to be the biggest stories of 2019 for the cannabis industry. But which stocks are most likely to win from these developments?

There will be plenty of big winners if the U.S. relaxes its federal marijuana laws. One stock that should especially enjoy a huge boost is Origin House (ORHOF). The company is the largest distributor of legal cannabis products in California.

Origin House stock doesn't currently command nearly as much of a premium as many of the Canadian marijuana stocks do. That's probably due in large part to Origin House's focus on the U.S. Federal recognition of state marijuana laws would almost certainly generate a lot more interest from investors in the stock.

Canopy Growth already ranks as one of the top two Canadian marijuana producers in terms of capacity. The company should see tremendous sales growth as it increases its supply in 2019 to meet soaring Canadian demand. And with Constellation at its side, Canopy Growth will almost certainly be among the first to launch a lineup of cannabis-infused beverages in Canada as soon as regulations allow it to do so.

In addition, Canopy Growth is already planning to expand into the U.S. with the recent legalization of hemp (cannabis with low levels of the psychoactive compound THC). Changes to federal marijuana laws could open the door for Canopy to move into the U.S. in an even greater way. Its cash stockpile from the Constellation deal would give it an advantage over its rivals in the rush to jump into the U.S. market.

What stock is most likely to benefit from a potential deal in 2019? Aphria (APHA) still has a dark cloud hanging over it from allegations that the company drastically overpaid for international acquisitions in deals that lined the pockets of key insiders. Assuming the company adequately addresses these issues, Aphria should be one of the top candidates for a potential partnership with a major company outside of the cannabis industry because of its production capacity and presence in key international markets, including Germany.