The grocer is partnering with Microsoft to introduce some innovative technology to its shoppers.

Kroger (KR 1.71%) is the second-biggest grocery retailer in the United States after Walmart (WMT 0.86%). Walmart has rapidly expanded its online grocery services in light of the impending threat of Amazon (AMZN 3.15%), but Kroger hasn't made the transition nearly as successfully. Kroger offers curbside grocery pickup and home delivery, but it charges customers more than Walmart or Amazon.

Meanwhile, Kroger is investing in technology behind the scenes. It's working on unmanned delivery vehicles and robot-filled warehouses that could easily fit in as part of Amazon's fulfillment network. Its most recent investment includes "digital shelves" and sensors throughout two of its stores in order to guide shoppers through the store more quickly. Kroger is partnering with Microsoft's (MSFT 1.07%) Azure cloud computing to support the new store features.

While digital shelves might seem like an also-ran compared to the technology in Amazon Go stores, it could be a bigger threat to Amazon than it first appears. 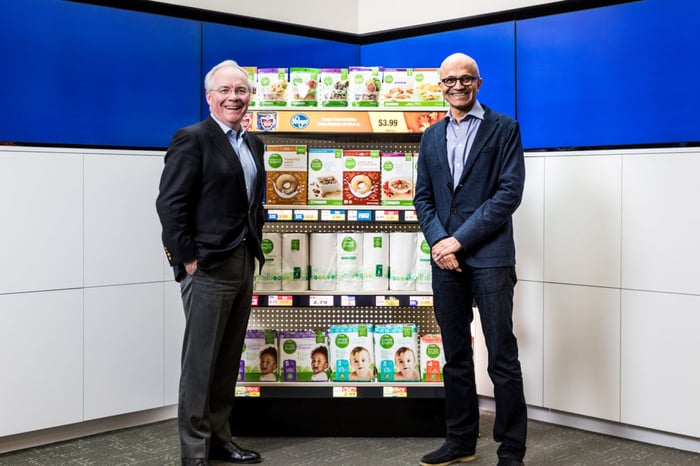 Digital shelves and sensors throughout Kroger stores could help increase the speed of shoppers' trips through the store. Shoppers can make grocery lists in Kroger's phone app before heading to the store, and the app will help guide them through the store to find everything on the list. Digital shelves can help indicate the items shoppers are looking for once they enter an aisle, so they don't have to spend time perusing the labels on the shelf.

While it doesn't allow customers to skip the checkout line like Amazon Go or Walmart's experiments with Sam's Club, it should enable them to have a more convenient shopping experience. That could increase foot traffic and inventory turnover at Kroger stores. Amazon Go stores have higher than average foot traffic, sales, and inventory turnover than the average convenience store thanks in large part to its technology.

Digital shelves can also help cut costs by reducing the need for labor. Since the shelves are digital, stores can update pricing instantly. No need to make new labels every time a store needs to change the price. Additionally, the technology may help keep shelves stocked more efficiently.

While it's not the marginal cost-reducing measure of getting rid of cashiers, the technology ought to save costs in the long term.

The bigger threat to Amazon

Kroger taking back share of the grocery market isn't a big threat to Amazon. Amazon has a massive retail operation and grocery is just a small -- albeit growing -- portion of that business.

Kroger's technology uses Microsoft Azure for the back end. If Kroger proves the efficacy of its digital shelves and store sensors in its own stores, it could prove a major competitor in a promising blue ocean market Amazon was poised to take. Not only that, but it would also provide business for Amazon's biggest competitor in public cloud computing.

If that weren't enough, Kroger has plans to use shopper data and Microsoft's technology to target ads based on predicted demographic data. The data Amazon collects from Amazon Go stores could be incredibly valuable in its own advertising business, and Kroger and Microsoft could become a competitive threat in that area. Microsoft already has years of experience in digital advertising, and it could provide a lot of insight and expertise to help Kroger sell ads.

To be sure, Amazon has a head start and superior technology. But Amazon's solution is very expensive -- an estimated $1 million in hardware per store -- and it's only proven viable for smaller-format convenience stores. Kroger's solution could be a more viable product for most retailers to improve sales and save money.

Kroger is stepping up the competition against Amazon, and it's taking a very Amazon-like approach to fighting back.