There's a lot more to Amazon (AMZN 1.54%) than its core retail business. Practically all of its profits come from its cloud computing division, Amazon Web Services (AWS). Beyond that, Amazon has a growing advertising business, offers a variety of services to third-party merchants, and runs one of the biggest streaming video services in the world. It's also experimenting with a delivery and logistics service.

Amazon is still concentrated on various retail efforts as well. It recently opened its Amazon Go store to the public in Seattle, and it reportedly plans to open up to six more across the country this year. Amazon Go gets rid of cashiers and checkout lines by using cameras and artificial intelligence to track customers throughout the store after they check in with an app. Amazon calls it "Just Walk Out" technology.

Loup Venture's Andrew Murphy sees Amazon Go stores as a testing ground for what could be Amazon's next big service. 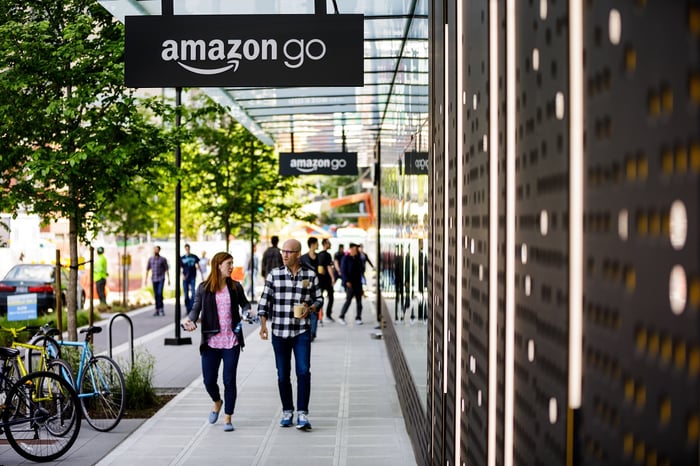 Checkout as a service

Amazon's most successful services take some of the big costs associated with running a business and offer solutions that lower overall expenses.

AWS, for example, removes the need to pay big up-front costs for servers while also enabling companies to scale quickly as their needs expand. Fulfillment by Amazon removes the need for retailers to store their inventory in their own warehouses. These services take big fixed costs and turn them into marginal expenses; the more customers use, the more they pay.

Amazon Go technology is the opposite of lots of Amazon's other services. Amazon Go replaces a mostly marginal expense -- cashiers -- with a big fixed cost -- a complex camera and AI system. The move would save money for retailers in the long run, but costs a lot up front.

Amazon can offer it to merchants for free

Amazon could offer to provide Amazon Go's software technology to stores at no cost because it would allow Amazon to make money on the backend. Stores would still have to pay for the hardware and install it themselves, but Amazon could give them everything they need to make it work. It might also be able to sell them the hardware at a low price thanks to its buying power.

Amazon could make money from giving away Amazon Go because it would lead to more Amazon Web Services customers. AWS is necessary to run the AI needed to make Amazon Go work. The cloud division benefits greatly from having Amazon's other operations as a customer, and this is one more example where that symbiotic relationship works to the entire company's benefit.

Amazon could also handle payments processing by providing the app shoppers need to check into the store with. And it can collect shopper data to feed into its third-party merchant services and advertising businesses. It could also be an act of goodwill to get higher-end brands to sell their products on Amazon's marketplace, Murphy points out.

The opportunity for retailers

There are over 3.5 million cashiers working in the United States making an average of about $21,680 per year. All told, retailers pay cashiers about $77 billion per year. Murphy believes cashier automation is a $50 billion opportunity for retailers. That's still a massive addressable market for Amazon Go's technology.

Retailers may also see a rise in average sales tickets as the ease of shopping makes people buy more. Just as it's easy to spend more on a credit card than if you pay with cash, it's even easier to spend more when you're never asked for payment at all and it just goes on a tab, so to speak.

Retailers could also see an increase in traffic and will rarely lose sales for impatient shoppers. Additionally, they could use their square footage more effectively without the need for checkout registers.

Amazon Go could be part of the Amazon services ecosystem

Amazon not only has the first-mover advantage in cashierless technology, but it's also capable of providing the technology at a lower overall cost than retailers could build it themselves or stand-alone competitors could offer. There are only a couple other companies in the world that have the ecosystems in place that would enable them to compete with Amazon on pricing.

There are clear benefits to retailers to move to cashierless technology, and the opportunity is massive for Amazon. Amazon could use Amazon Go technology to grow AWS, payments processing, advertising, and third-party merchant services, all of which offer higher profit margins than its core retail business. Meanwhile, the marginal cost to license Amazon Go software to more stores is effectively nothing since it has already built it out for its own stores.

Amazon may continue to build out more Amazon Go stores of its own or incorporate some of the technology into Whole Foods stores. It wouldn't be a huge surprise, though, if Amazon follows suit with its other services like cloud computing and warehousing -- where it's also its own customer -- and offers its "Just Walk Out" technology to everyone with a storefront.