Apple ( AAPL -1.17% ) has had a rough start to 2019. After announcing a dramatic cut to its previous quarterly revenue guidance, the tech giant's stock suffered its biggest single-day loss in six years on Jan. 3. Perhaps to soften the blow, Apple announced on Jan. 4 that its App Store set a new single-day sales record on Jan. 1 with $322 million generated in the first 24 hours of the new year.

The downward revision of Apple's quarterly guidance was mostly due to weaker-than-expected iPhone demand, particularly in China. So it's smart for Apple to remind investors that it has other growing revenue streams such as the App Store, which falls under its services revenue. 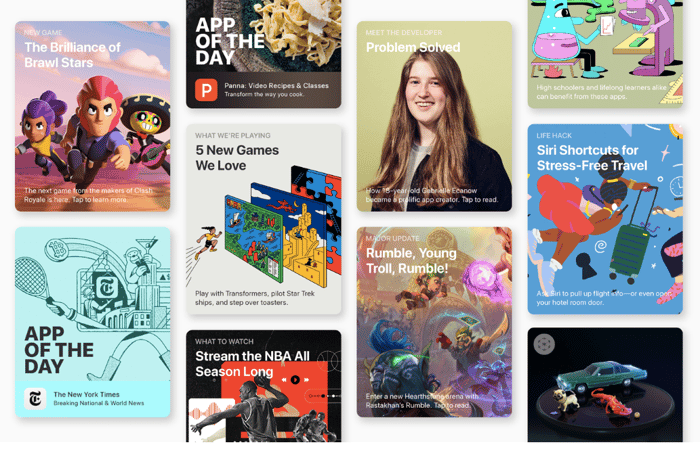 The App Store did $1.22 billion in sales in the week between Christmas Eve and New Year's Eve, setting a new sales record for the holiday week. And that led into the single-day sales record of $322 million on New Year's Day. Gaming and self-care were the top two categories for app downloads during the holidays on the App Store, according to Apple.

In addition, a number of other Apple services businesses broke sales records, including Apple Music, iCloud, and Apple Pay. Apple said the quarterly results show it's on track to hit its goal of doubling the size of its services revenue in the period between 2016 and 2020.

Is this a sign that Apple can survive a dip in iPhone demand?

The downward revision of Apple's quarterly revenue guidance to $84 billion, down from its previous forecast range of $89 billion to $93 billion, rattled many investors in the first week of 2019. That's because it was the first time in 16 years Apple had to cut its revenue guidance. The new estimate would represent a 5% decline in revenue from the same quarter of the previous year.

Apple said the cut to its revenue guidance and the year-over-year decline in revenue is due to weaker-than-expected iPhone demand, especially in China. But Apple also admitted it wasn't just China that had disappointing iPhone sales; the same story held true for some developed markets, too.

Sales for Apple's flagship product were down partly because customers are holding on to their phones longer since the changes between models are less noticeable, yet the price tags are higher. Instead of buying a new $1,000-plus smartphone that's not much different from the one they already have, people are choosing to simply replace the battery in their current iPhone.

Apple has known for a while that the smartphone market was maturing, which is why it's been putting extra focus on its other revenue streams. In fact, outside its iPhone business, Apple's revenue grew by nearly 19% year over year for the past quarter. And services isn't the only section to hit a record revenue for the period; wearables and Mac both hit new all-time sales records, too. Apple said wearables grew by an impressive 50% year over year for the holiday period, thanks to the popularity of its Apple Watch and its AirPods.

And just because iPhone customers aren't upgrading their phones as often, that doesn't mean Apple can't still make money off them. Apple's installed base of active devices grew by more than 100 million units in the past year, which means it hit a new all-time high of about 1.4 billion. These are loyal customers Apple can lure into buying other products and services, such as an Apple Music subscription, a HomePod, or an iCloud plan.

These growing side businesses are important for Apple's future, because they prove that if Apple's main revenue stream -- iPhone sales -- slow down, the company can still make money off its installed base of users. With 1.4 billion active device users, Apple is still doing something right.