FCA will pay about $800 million to settle emissions cheating charges. But more trouble could lie ahead.

Fiat Chrysler Automobiles (FCAU) has agreed to pay almost $800 million to settle claims by federal agencies and the State of California that it used software that generated false results on tests of diesel-engine emissions.

FCA maintains that it did not deliberately program its vehicles to cheat on emissions tests. But the company still faces potential criminal liability for about 100,000 vehicles sold in the U.S. with what regulators say were "defeat devices" banned under the Clean Air Act.

Like VW, FCA was said to be using defeat devices

In a case that followed Volkswagen's (VWAGY -0.32%) massive global "Dieselgate" scandal, the U.S. Environmental Protection Agency (EPA) and California Air Resources Board (CARB) alleged in January 2017 that the diesel-powered version of FCA's Ram 1500 pickup and Jeep Cherokee SUV had software that acted as a defeat device, in violation of the Clean Air Act. 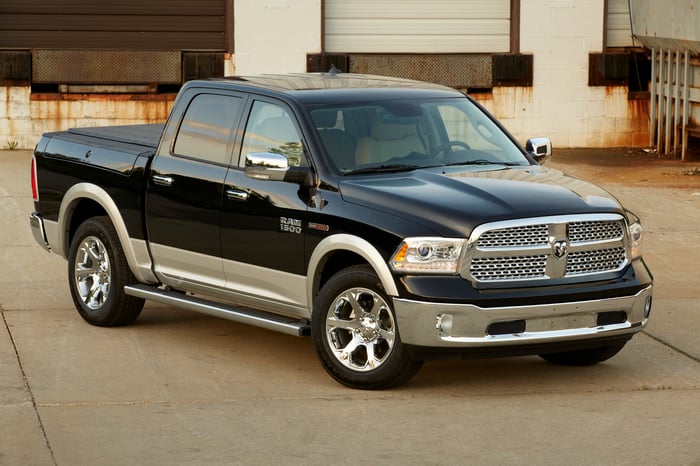 Versions of the Ram 1500 pickup equipped with the 3.0-liter "EcoDiesel," offered between 2014 and 2016, sold well and got good reviews. But regulators say FCA's diesel engine was too dirty to meet U.S. standards. Image source: Fiat Chrysler Automobiles.

Under the Clean Air Act, a defeat device is anything that shuts off a vehicle's emissions controls to allow it to emit illegally high levels of pollutants. An automaker that sells vehicles equipped with defeat devices is liable for fines and for the costs of repairing the vehicles to comply with the act. If it knowingly installed defeat devices, it may also face criminal charges.

Similar to the VW case, the EPA's key allegation against FCA is that its vehicles had software that caused "the vehicles' emission control systems to perform differently, and less effectively, during certain normal driving conditions than on federal emission tests, resulting in increased emissions of harmful air pollutants."

At the center of the case: Diesel-powered versions of two big sellers

The vehicles at the heart of this case were diesel-powered versions of two of FCA's bigger sellers in the United States: the Jeep Grand Cherokee and the Ram 1500 made between 2014 and 2016. The "EcoDiesel" Ram, as FCA called it, was for a while the only diesel-powered light-duty pickup available in the United States -- and it sold pretty well, helping the Ram brand to market-share gains over Ford Motor Company and General Motors in 2014.

But in 2016, the German government reportedly found that some of FCA's diesel engines appeared to be programmed to shut off their emissions controls after a pre-set period of time. And testing by West Virginia University's Center for Alternative Fuels, Engines, and Emissions in 2017 found that diesel-powered Grand Cherokees and Rams were emitting nitrogen oxides at three to 20 times the levels permitted by the Clean Air Act. Nitrogen oxides are the compounds that cause smog.

What FCA agreed to -- and what it didn't

Under the settlement, FCA agreed to pay

FCA also agreed to recall and repair the roughly 100,000 affected vehicles. The repair is a software update; it's not expected to be expensive. FCA took a one-time charge of 713 million euros ($820 million) in the third quarter of 2018 in anticipation of this settlement.

While FCA agreed to settle the case, it did not admit wrongdoing. It has maintained all along that its software wasn't intended to function as a defeat device. In a statement on Thursday, it said that it "maintains its position that the Company did not engage in any deliberate scheme to install defeat devices to cheat emissions tests."

What's next for FCA

FCA is still facing a criminal investigation by the U.S. Justice Department, as well as an investigation by the Securities and Exchange Commission. It's not yet clear whether those will result in further penalties. But the good news for shareholders is that FCA has cleared one significant and expensive hurdle in its effort to resolve these allegations.