The Ram 1500 EcoDiesel has been a hot seller for Chrysler since its introduction earlier this year. Chrysler said on Tuesday that it would double production of EcoDiesel-equipped Ram 1500s. Source: Fiat Chrysler.

Fiat Chrysler (NASDAQOTH: FIATY) said on Tuesday that it will double production of a diesel version of its Ram 1500 pickup in response to continued strong demand.

Chrysler introduced its Ram 1500 EcoDiesel, the only diesel-powered light-duty pickup currently offered in the U.S., earlier this year -- and it has proven popular beyond the company's expectations.

It has also proven to be a surprisingly potent weapon in Chrysler's market-share war with General Motors (NYSE:GM) and Ford (NYSE:F).

A hit product that GM and Ford can't currently match
Chrysler said in its statement on Tuesday that nearly 60% of all Ram 1500 EcoDiesel sales are "conquest" sales, an industry term that means the buyer was replacing a vehicle made by a different automaker.

In the fiercely brand-loyal world of pickups, that's impressive. It's one part of how the Ram pickup line has gained almost 3 points of market share in the last year at Ford's and GM's expense.

The Ram 1500 EcoDiesel has been a substantial part of that success since its launch early this year. The EcoDiesel -- a 3.0 V6 "clean diesel" engine -- gives Chrysler a unique competitive advantage: Ford and GM only offer diesels on their heavy-duty pickups. 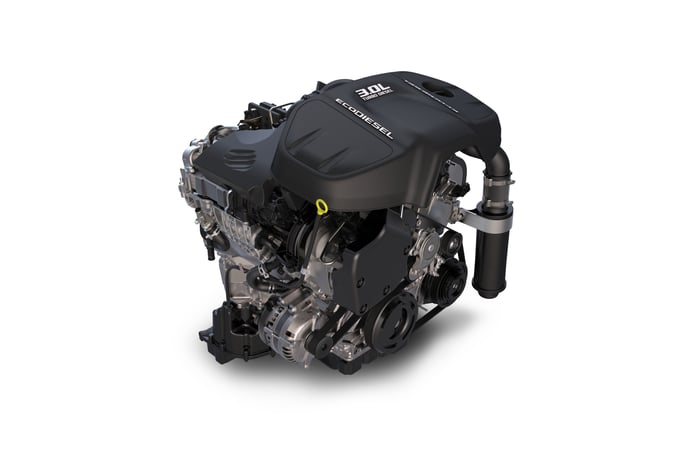 At $4,000, the EcoDiesel engine is an expensive option. It's a lot of money for a 3-miles-per-gallon gain over the Ram's base engine, a gasoline V6. But it has sold better than Chrysler expected -- and helped raise the average transaction prices of Ram pickups, and likely the line's profitability as well.

Chrysler had been building 10% of its Ram 1500s with the diesel engine. Tuesday's move raises that proportion to 20%. While Chrysler doesn't break out sales of Ram 1500s from its heavier-duty siblings, Automotive News estimates that Chrysler's main truck plant in Warren, Michigan, will build roughly 335,000 Ram 1500s in 2014.

Assuming a similar production rate next year, that's about 67,000 EcoDiesel-equipped pickups -- enough, perhaps, to make a noticeable difference in the company's bottom line in North America.

The appeal of a diesel Ram 1500
Diesel engines have a strong appeal to many pickup buyers. They offer good fuel economy and strong towing capacity -- along with a macho "big rig" appeal.

But for years, diesel engines were only offered in heavier-duty pickups like Ford's Super Duty models. Just as the name implies, heavier-duty pickups are heavier, more expensive, and typically less fuel-efficient than a comparable "half-ton" or "light-duty" pickup like the Ford F-150 or Ram 1500. They're often bigger (and harder to park in tight spaces or small garages) as well.

For the majority of pickup buyers, who only occasionally haul heavy loads or tow big trailers, a pickup like a F-250 or Ram 2500 is overkill. Some buyers choose them anyway -- but given the appeal of a diesel pickup, and the availability of a new generation of cleaner-burning diesel engines, there was an opening for a diesel-powered light-duty pickup in the U.S. market.

That's where Chrysler jumped in. When it launched the Ram 1500 EcoDiesel earlier this year, powered by a new 3.0 liter diesel V6, it touted the new diesel truck's fuel economy -- an EPA-rated 28 miles per gallon, best among full-size pickups -- and its 9,200-pound towing capacity.

Those are worthwhile advantages for some buyers. But it's possible that many Ram EcoDiesel buyers are drawn by the idea of a diesel pickup that is relatively easy to live with.

Either way, Chrysler's dealers will soon have more diesel Ram 1500s to sell.