GE has a relatively easy way to raise cash, pay down more debt, and satisfy shareholders and bondholders alike.

General Electric's (GE -1.24%) stock price has risen recently partly due to speculation regarding a potential sale of GE's highly profitable GECAS jet engine leasing business for $40 billion. A deal would certainly help GE reduce debt, but there's an easier and less problematic way for GE to raise cash from asset sales. Below, I'll explain what it is and why it's a better alternative.

A deal would obviously help GE reduce its net debt burden of around $110 billion as well as deal with the issue of maturing debt in the next couple of years. However, it would also reduce earnings and cash flow at GE Capital -- GECAS is on track to deliver $1.2 billion in earnings in 2018. On balance, a deal at such a level would probably be a good idea as it would help alleviate existentialist threats caused by GE's debt burden.

It's important to remember that GE's industrial businesses do actually generate cash flow from which debt can eventually be repaid, and slashing the dividend has created an extra source of available cash. The problem is, GE has nearly $26 billion in debt maturing in the next couple of years and nearly $50 billion by the end of 2023. 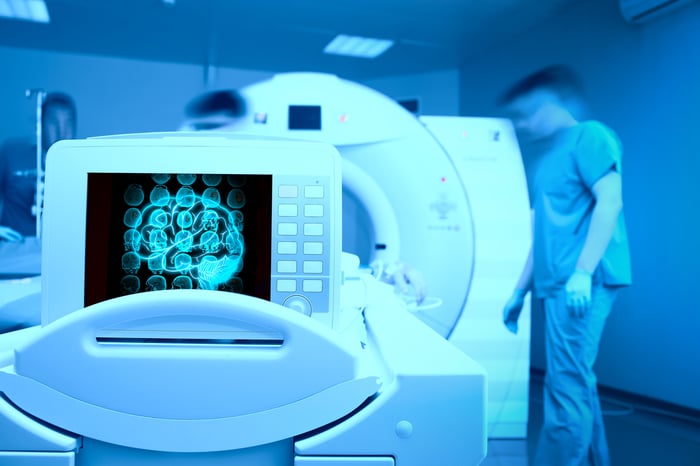 Consequently, GE is selling assets in order to reduce debt, particularly as it will be hard to refinance debt at reasonable levels if the market doesn't believe in the credibility of GE's debt-reduction plans. The leading analyst on GE, JP Morgan's Steve Tusa, believes GE may well need to raise equity in order to deal with its debt problem -- an equity raise would dilute existing shareholders' holdings.

However, there is another way GE could raise cash, perhaps up to $21 billion, and it comes from one of GE's highly prized assets: GE Healthcare.

To understand what's going on with GE Healthcare and the repercussions for investors, let's go back to June, when former CEO John Flannery laid out his plan to reduce GE's net debt to earnings before interest, tax, depreciation, and amortization (net debt to EBITDA) to levels deemed acceptable for investment-grade debt by credit rating agencies by 2020.

A big part of the plan to reduce net debt by $25 billion by 2020 included a transfer of $18 billion worth of debt/pension obligations with the GE Healthcare IPO and to monetize 20% of the Healthcare IPO --  the remaining 80% of GE Healthcare would go to shareholders in a tax-free distribution.

Meanwhile, more asset sales, selling the remaining stakes in Wabtec and Baker Hughes and cash flow from industrial operations would be augmented by an improving power segment.

Unfortunately, developments since June have cast doubt on the plan:

GE needs to take action in response, but what's the solution?

How GE can reduce its debt

Aside from more asset sales -- such as GECAS -- CEO Larry Culp could simply increase the amount that GE monetizes from the Healthcare IPO. In fact, in the CNBC interview, he already hinted he could do this: "We talked in June about an IPO there where we'd take 19.9% of the proceeds as cash. We have flexibility, we have options there. We could preserve our tax-free spin status while selling up to 49.9%."

This is how the split would look if he did adjust the 19.9% figure upwards to 49.9%. As you can see below, GE would monetize an extra 30% of GE Healthcare, but what could this be worth?

In other words, GE could monetize up to $21 billion from the healthcare IPO, and nearly $13 billion more than the Flannery plan called for. That would go a long way toward allaying fears over GE's liquidity -- don't forget that GE Healthcare will take $18 billion of debt/pension obligations with it.

Why such a plan makes sense

If Culp took this route, in my opinion, the market would receive it well. It's true that GE shareholders would get less of GE Healthcare, but the fact is, Flannery's plan did nothing for the share price -- probably because the bond and equity markets didn't believe in it.

The best interest of GE shareholders is that management allays fears over its debt burden by raising cash. Moreover, if the market felt better about GE's debt, then there's probably more upside in GE's stock price than there is in GE Healthcare.

All told, GE monetizing a larger share of the GE Healthcare IPO makes sense for GE shareholders and bondholders, and such an action should be welcomed if Culp decides to take it.