These two pot stocks got an unexpected boost today.

Canopy Growth (CGC -6.16%), a top Canadian pot company, is up big again today. Shares of the pot titan bolted higher yesterday on a particularly rosy upgrade from analysts at Piper Jaffray. And the company's stock is getting yet another boost today from an unrelated bit of news: an upbeat earnings outlook provided by its partner Constellation Brands (STZ 0.29%).

During Constellation's quarterly conference call, held yesterday morning, the beverage giant implied that Canopy is on track to far surpass Wall Street's revenue expectations over the next 18 months. Specifically, Constellation's president and COO Bill Newlands noted during the call that he believes Canopy will haul in approximately 1 billion Canadian dollars in revenue over the course of the next year and a half.

This optimistic outlook appears to have helped Constellation Brands' shares rise by as much as 7% today, and it also seems to have caused the shares of fellow Canadian pot producer Aurora Cannabis (ACB -4.89%) (ACB -4.62%) to spike by exactly 10% in early-morning trading. 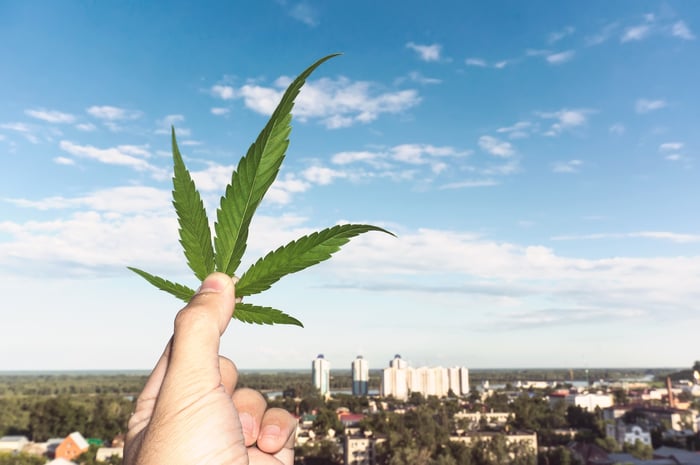 Why is Constellation's glowing optimism in its Canopy Growth investment such a big deal? Given that the Canadian pot market remains in the early stages of commercial development, industry insiders were expecting sales to ramp up fairly slowly at first. The black market, after all, is still a major source of competition for legal marijuana operations in Canada.

However, Constellation is predicting that -- despite these headwinds in the nascent legal pot market -- Canopy will exceed Wall Street's consensus revenue estimate for the next 18 months by something along the lines of 56%. That's a rather bold prediction. But Constellation probably wouldn't roll out such a staggering revenue estimate if there wasn't solid data to back it up.

Is Constellation's outlook justified? Unfortunately, the answer to this all-important question won't become readily apparent until top companies like Aurora and Canopy Growth begin to release their quarterly earnings in the coming weeks. From what we know so far, though, the demand for legal marijuana has far outstripped supply in Canada since the drug became legal for adult-use recreational purposes last October. Whether this strong demand will translate into better-than-expected earnings remains to be seen.