For most investors, a dividend isn't nearly as attractive if it can't be counted on to arrive at regular intervals. The dependable nature of a stock's payouts is one of the characteristics that makes dividend stocks an attractive investment vehicle -- providing a buffer against inflation in the broader economy and paving the way for big gains through compounding and dividend reinvestment. Companies that can't be relied on for predictable payouts are the ones that income-focused investors tend to avoid.

To give investors a starting point on dividend stocks that are backed by solid, dependable businesses and can be counted on to cut checks in perpetuity, we put together a panel of Motley Fool contributors and asked each member to profile a company that will keep cash flowing back to shareholders. Read on to see why McDonald's (NYSE:MCD), Boeing (NYSE:BA), and Walt Disney Company (NYSE:DIS) are companies that are likely to pay you for the rest of your life. 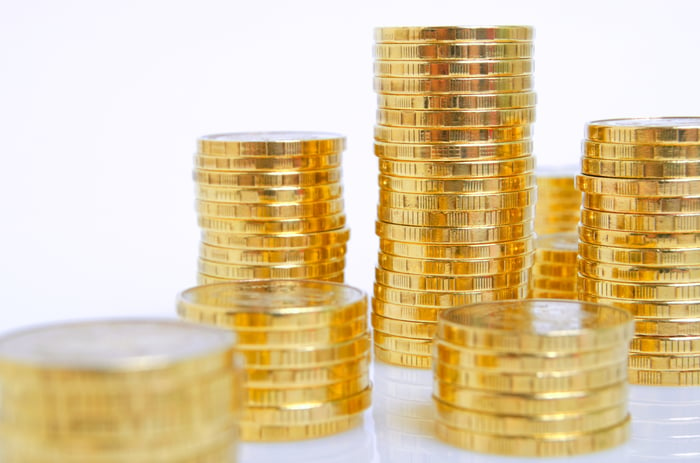 Demitri Kalogeropoulos (McDonald's): In 2018 McDonald's celebrated the fact that the Big Mac is still a mainstay on its fast-food menu 50 years after its launch. A lot has changed in the industry over that period, but the chain's viability hasn't ever really been in question. The next half decade should bring investors more of the same generally strong results.

Sure, McDonald's has faced its share of challenges, including adopting to the latest consumer demand shift toward higher-quality, fresher ingredients. It is currently struggling with weak customer traffic in the U.S., which is a problem management is hoping to fix through an aggressive store upgrade program.

Even if the capital investment program underperforms targets, there's no reason to question the strength of Micky D's dividend. Profitability is on pace to reach the mid-40% range, after all, thanks to its refranchising initiative. The fast-food titan is one of the market's most efficient companies at converting those profits into cash, too.

All of that adds up to attractive prospects for long-term dividend growth. McDonald's recently boosted its payout by 15% as part of a capital return plan that should see $25 billion come back to shareholders by 2019, or about $8 billion per year, since 2016. Those are the types of numbers that income investors can celebrate, whether or not they are fans of the Big Mac or any other of McDonald's fast-food products.

Boeing hasn't gone away, nor will it

Rich Smith (Boeing): Asked to pick a dividend stock that "should pay you the rest of your life" back in March, I offered up Boeing as a likely suspect. Ten months later, nothing has happened to shake my confidence in that -- not even Boeing's share price.

When I picked Boeing to outperform back in March, the reasons were simple: Around the globe, two major plane makers dominated the airplane-building business. One was Airbus, a creature of European government subsidies less than 20 years old. The other was Boeing, a pioneer of private aviation with more than a century of longevity under its belt, a superior profit margin, and no lack of new plane orders on which to earn further profits.

What has changed is that, in the intervening 10 months, Boeing has raised its dividend (it now pays 2.4%, more than the 2% it paid in March, and more than the 2.2% dividend averaging on the S&P 500 today). It's grown its profits (Boeing now earns in excess of $10 billion per annum -- and with free cash flow of $13.6 billion). And despite some negative press from a recent plane crash in Southeast Asia, analysts have raised their earnings targets for Boeing, such that it's now pegged for 16% annual earnings growth over the next five years.

Unless you think people are going to suddenly stop flying in airplanes sometime in the next few decades, Boeing's future as a dividend payer should be pretty secure -- probably for the rest of your life.

Dividends are part of Disney's magic

Keith Noonan (Disney): The 1.6% yield on Disney shares might cause some dividend-focused investors to shy away from the stock, but the House of Mouse runs a strong, sturdy business and can be counted on for dependable payout growth -- characteristics that should be appealing to long-term investors. Disney's dividend history stretches back more than six decades, and while there have been periods in that history when payout growth has been elusive, the company has never cut or suspended its dividend. More recently, shareholders have not been left wanting when it comes to dividend growth, with the company more than doubling its payout over the last five years.

Even with the company ramping up its dividend, the cost of covering its forward distribution comes in at roughly a quarter of both earnings and free cash flow. That suggests that Disney is in great shape to continue delivering meaningful payout growth while still pumping money back into the business to power innovation and carry out expansion efforts that will power the company's next growth stages.

Management might not implement dramatic payout increases in the near future, as Disney recently completed its $71 billion acquisition of key film and television assets from Twenty-First Century Fox. However, the company's announcement of a 5% payout increase in November signaled that meaningful growth will continue even on the heels of the massive purchase.

With its cable business facing pressure from cord-cutting trends and rising content costs, Disney is making a big push into over-the-top streaming distribution, expanding its content library, and evolving its technology and distribution methods. That means it won't be surprising if payout growth over the next five years lags the rapid pace of the last half decade, but this use of cash flow should help the company ensure that it's in position to deliver substantial earnings and dividend growth over the long term.