Ready or not, autonomous cars are entering the mainstream.

Over the past several years, there have been plenty of headlines concerning autonomous vehicles, and the inevitable self-driving future hurdling toward us. The race is on to determine the winners in this fast-emerging industry.

Waymo, a subsidiary of Google parent Alphabet (GOOGL -2.10%) (GOOG -2.22%), has long been considered the front-runner, being the first to have a working model on the highways and byways of America. Competition is beginning to loom, however, as evidenced by the increasing number of test drives by well-heeled competitors.

Let's look at recent announcements by Waymo, General Motors (GM -0.16%), and Ford Motor (F -1.35%) that give insight into the fast-approaching future of self-driving cars. 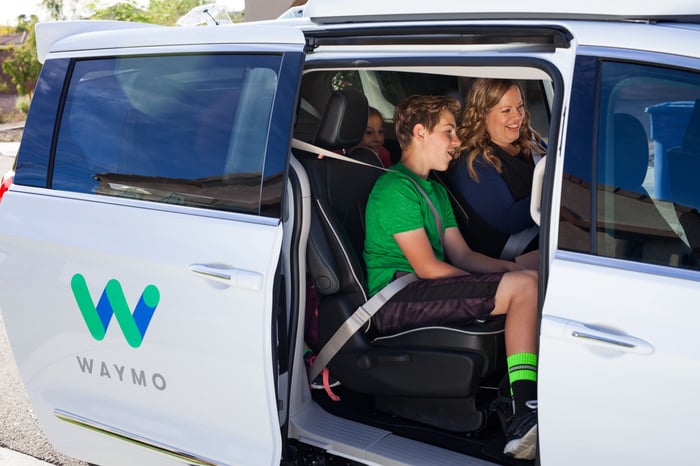 Cruise Automation, the self-driving start-up acquired by GM in 2016, just announced a partnership with food delivery service DoorDash to begin testing driverless deliveries. The service will be tested in San Francisco, Cruise's home base. A human "safety driver" will be located in each vehicle to take the wheel in the case of an emergency. A select number of DoorDash merchants will participate in the test, which is looking into the challenges of driverless food delivery and how they can be overcome.

Ford, which pumped $1 billion into Argo AI in 2017, announced in October 2018 that it would expand its autonomous testing program to Washington, D.C. early this year, joining ongoing tests in Detroit, Miami, and Pittsburgh. This is part of a two-pronged strategy for the company -- testing self-driving vehicles on the roads, while also testing the business model and public perception of the technology.

Ford turned heads early last year when it partnered with Domino's Pizza to test self-driving pizza deliveries. Unlike at GM, the car will still be driven by a human driver, while researchers on board will be working to understand how customers respond to and interact with what they believe is a self-driving car. Ford expanded these tests in mid-2018 to include urban delivery start-up Postmates. Walmart joined Ford's delivery tests in November.

Waymo launched its commercial ride-hailing service in four Phoenix suburbs in December, after an extensive testing program. The service, called Waymo One, is currently only available to customers who participated in the company's Early Rider program. Human backup drivers will initially accompany the vehicles, though Waymo hasn't provided a timeline for eliminating them. The company plans to expand the program in the coming months and years.

It's important to note that the self-driving technology is far from perfect, and improvements to the technology will be ongoing for the foreseeable future. Early last year, Uber was forced to temporarily pull its self-driving cars off the road, after causing the first fatality involving a pedestrian being struck by an autonomous vehicle.

A number of residents in suburbs around Phoenix have complained about Waymo vehicles, saying the self-driving cars are overly cautious. For example, the cars tend to give other vehicles a wide berth, and stop for three full seconds at stop signs, causing frustration among human drivers.

Some residents of Chandler, a suburb of Phoenix and one of Waymo's first test cities, typify the fears among some of the population about the rise of autonomous driving and artificial intelligence. A few have attacked the company's autonomous vehicles, throwing stones, threatening test drivers with guns, and even running the cars off the road.

This all goes to show that self-driving cars are already beginning to enter the mainstream, but not everyone is happy about the transition. Those investing in any of these companies based on self-driving technology should be aware that this will be a long and arduous journey -- so buckle up.