With the market pullback over the past three months, many investors are looking for lower-risk options for their portfolios. A classic option from the investor tool belt is to look at stable businesses offering a healthy dividend -- for example, ExxonMobil, currently yielding 4.55%. That way, even if a stock price remains flat, investors are still receiving consistent income.

Jordan Wathen (TPG Specialty Lending): This business development company (BDC) is a go-to lender for companies with a story that would never pass a bank's rigid credit committee. Whereas a bank might run away from a complex and hairy loan, TPG Specialty Lending has little issue holding its nose and diving right in.

In recent years, it's lent money to retailers on the brink, overleveraged media companies spiraling toward bankruptcy, and oil companies banks wouldn't touch. But more often than not, TPG Specialty Lending emerges with its principal intact, scoring a fat payday in the form of fees and interest for making loans that few lenders can or will. Considering that its average loan yields more than 11% a year, credit losses have been a mere rounding error over its life as a public company.

In much the same way that real estate investment trusts (REITs) avoid corporate taxes by paying out virtually all their profit as a dividend, BDCs like TPG Specialty Lending enjoy similarly favorable tax treatment. As a result, its shares recently yielded more than 9%, based on regular and special dividends paid over the most recent 12-month period. After a long period of calm in the credit markets, recent turbulence that began in October could be a boon for business as competitors pull back, helping this BDC to grow its earnings by using principal repayments to make even higher-yielding loans.

Daniel Miller (Ford Motor Co.): Investors hunting for a dividend yield paying more than Exxon can find one in the hard-hit automotive industry. Ford investors witnessed the stock shed 38% of its value in 2018, and recognize that the company has much work to do restructuring its business as this cycle plateaus. However, with a price-to-earnings ratio of 5.3 and a dividend yield currently at 6.9%, it's an intriguing option for income investors.

The most important thing for investors to consider is the dividend's sustainability. After all, what good is a high dividend yield if the dividend is about to be slashed or put on pause? Ford executives have asserted that the automaker's dividend is safe and sustainable even during a downturn.

The company puts its money where its mouth is, holding a $23.7 billion cash pile at the end of the third quarter. It has also adjusted Ford Credit to send more cash back to Ford. Previously, cash generated by Ford Credit was kept with that division to grow its lending base, but now that the entity is as large as Ford wants it, roughly $1.6 billion to $1.7 billion in cash will be sent back to Ford -- and that alone could cover about 70% of the dividend. 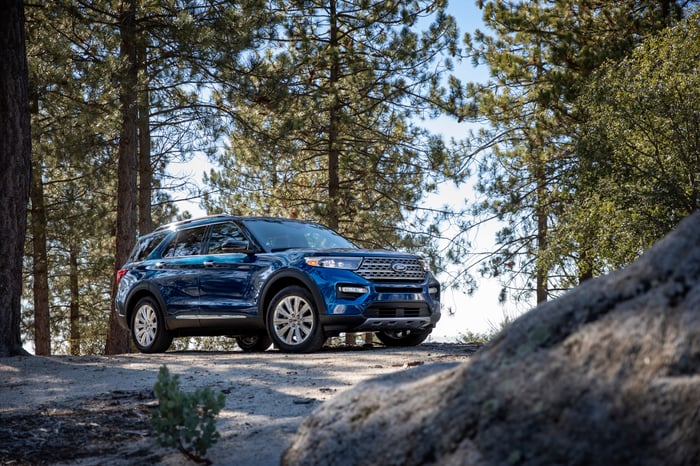 With the dividend looking sustainable, investor attention should focus on Ford's restructuring over the next few years. Currency exchange and commodities have hurt the company's results, and as those factors are out of its control, it needs to improve its own operations and strategy to improve results. One change has been a reduction in platforms: Ford had 27 platforms in 2007 and has reduced that to nine currently; it will eventually move to five architectures. That move, among others, should help Ford switch production to match demand faster, and cut costs due to improved economies of scale.

Strategywise, Ford is also focusing its capital on more profitable products. That's why the company recently announced it would halt all U.S. production of passenger cars other than the Focus and Mustang, and would bring back the midsize Ranger pickup and the Bronco SUV.

Ford will inevitably hit speed bumps as the market plateaus and it restructures its business, but it has an incredibly cheap valuation and a sustainable and enticing dividend yield.

Call up this telecom

Jeremy Bowman (AT&T): Like other oil stocks, Exxon has seen its price fall alongside weakening oil prices. With the stock trading around a five-year low, that's had the effect of lifting its dividend yield, making it appealing for income investors.

However, one stock investors may want to consider for an even juicier yield is AT&T, which recently offered a whopping dividend yield of 7.3%. Like other high-dividend-yielding companies, including Exxon, AT&T is not without challenges. The company has a massive debt load of $168.5 billion thanks to its blockbuster acquisitions of DIRECTV and, more recently, Time Warner, which it now calls Warner Media. That debt makes the company especially vulnerable to rising interest rates.

With its telecom business having matured, AT&T is looking to entertainment as its next frontier, and the company is preparing to launch its own streaming network, leveraging assets from HBO, TBS, TNT, and Warner Bros. for the new service. Given the success Netflix has had and the way that company has charmed investors, a successful launch could help charge up AT&T's share price -- especially as the stock is cheap these days, trading at a P/E ratio of just 9. That low valuation also translates into a reasonable payout ratio of 59%, meaning that the company has more room to raise its dividend than Exxon. And it faces less of an existential threat than the oil major, as its position in telecom is solid; despite slow growth, there are no foreseeable threats to the industry, as Americans depend on it to power their smartphones.

For investors comfortable with AT&T's large debt and its transition to entertainment, its hefty yield looks considerably appealing.