There are some interesting parallels here.

After posting a record year in 2011, chip giant Intel (INTC 0.39%) reported a modest revenue decline in 2012 followed by another decline in 2013. The company's sales bounced in 2014 before delivering another slight drop in 2015. Things have gotten better for the chipmaker, though, with sales growing modestly in 2016 and 2017. When the company reports its full-year 2018 results, analysts expect the company to turn in revenue growth of 13.5% -- the fastest pace the company has seen in years.

After Apple's (AAPL 1.21%) most recent guidance reduction -- in which it reported that sales for the first quarter of its fiscal 2019 would be down year over year -- I can't help but notice a couple of interesting parallels between Apple today and Intel in 2012. Allow me to explain. 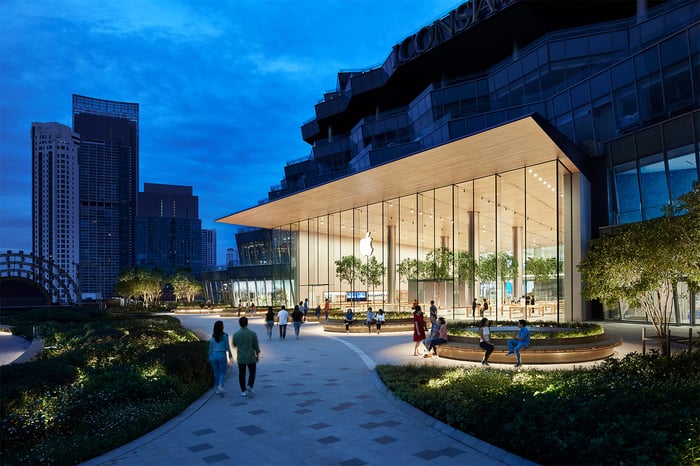 For years, Intel's bread-and-butter business was the sale of chips into personal computers. No, that wasn't all Intel did, but in 2012, a whopping 64% of Intel's revenue came from its PC client group business. That number is eerily similar to the roughly 62.8% of Apple's business in its fiscal 2018 that came from sales of the iPhone.

The PC market, as you might know, entered a prolonged slump, which weighed on Intel. In another parallel, market research company IDC claimed in a Dec. 11 press release that "worldwide smartphone shipments are expected to decline by 3% in 2018 before returning to low single-digit growth in 2019 and through 2022." (We'll see if IDC's prediction about the positive growth between 2019 and 2022 will actually materialize.)

While the overall PC market decline was bad news for Intel, the situation is a little bit different (and arguably worse) for Apple. Intel offers products across the entire spectrum of PCs -- it'll sell companies chips for the cheapest, lowest-end computers, as well as chips at the heart of the priciest of PCs. (Intel chips, for example, power Apple's premium Mac computers.)

Apple, on the other hand, participates only in the high end of the smartphone market. That market is substantially more lucrative than the low-end or midrange markets, but as my Fool.com colleague Evan Niu recently wrote, "[what] little growth is left [in the smartphone market] is being driven by low-cost handsets from Chinese vendors."

Back in 2012, Intel had other businesses that it was cultivating. The company had long supplied chips into the data center, and the company's ambitions in that space, even all the way back then, were formidable. It also sold chips into the embedded market and even has a small presence in the solid-state storage drive market.

Over the last several years, those businesses have made up much larger portions of Intel's total sales. For some perspective, the company's data center group (DCG) accounted for 20% of revenue in 2012, but in 2017, DCG made up 30% of the company's sales. Intel has yet to report its revenue for the entirety of 2018, but during the first three quarters of 2018, that figure rose to 32.4% of sales.

DCG is the mainstay of Intel's diversification efforts, but many of the company's other businesses -- like its Internet of Things group (formerly known as Intel's embedded segment) and its non-volatile memory efforts -- have grown in importance. The tech titan also acquired programmable logic company Altera in 2015 and self-driving car chip specialist Mobileye in 2017 to further broaden its total addressable market.

We're seeing similar diversification efforts from Apple. Apple has been investing heavily in its services business, which has grown to the the company's second-largest segment after the iPhone. The company has also released several hit products like AirPods wireless earbuds and the Apple Watch. Apple also has other product categories like the iPad and the Mac in its collection of businesses, but those segments aren't consistent growers; Apple reported that they saw sales decline by 2% and 1%, respectively, in fiscal 2018.

The point, though, is that like Intel, Apple may have to rely on other businesses beyond the iPhone for growth. Moreover, since Apple's non-iPhone segments represent relatively small portions of the total (just as Intel's non-PC businesses did back in 2012), it could be a while before the other segments are large enough that their growth can consistently more than make up for meaningful declines in the iPhone.

Check out the latest Apple and Intel earnings call transcripts.