The card issuer put many of Wall Street's worries behind it.

Shares of Synchrony Financial (SYF 0.57%) are on the move after the company released fourth-quarter earnings results, rising more than 10% as of 4 p.m. EST. Investors were pleased to learn that the private-label card issuer renewed its relationship with Sam's Club, despite losing Walmart (WMT 0.43%) as a key customer last year.

Some backstory goes a long way in understanding why Synchrony Financial is soaring today.

Synchrony Financial makes its money primarily as a private-label issuer of store credit cards. In October, investors learned that the company would soon lose Walmart, one of its biggest partnerships, to Capital One. Wall Street took that as a sign that Synchrony's relationship with Sam's Club was also at risk. Those two partnerships made up about 23% of its loan portfolio. 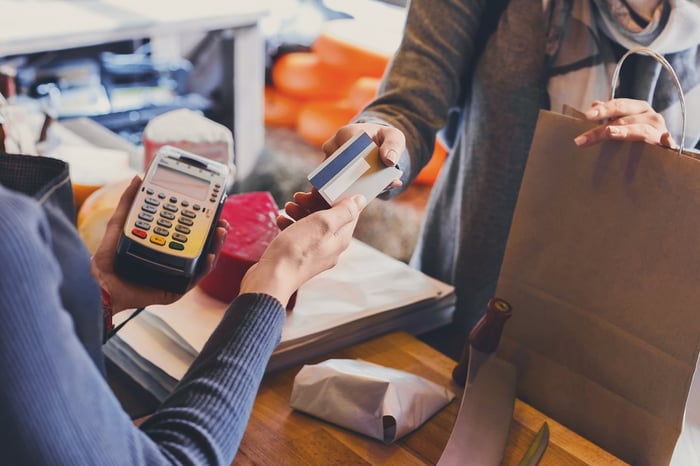 Investors' concerns about the future for the Sam's Club partnership grew in November, when Walmart filed a lawsuit against Synchrony, demanding $800 million in damages it said it suffered as a result of a breach of contract. At this point, any outside observer had almost every reason to believe that Synchrony's partnership with Sam's Club would come to an end.

As it turns out, Wall Street's concerns were overblown. In its fourth-quarter earnings press release, Synchrony said that it extended its deal with Sam's Club, and Walmart agreed to drop its lawsuit against the company.

On its fourth-quarter conference call with analysts, Synchrony said that in the first quarter of 2019, it will benefit by releasing reserves against loan losses associated with its book of Walmart card loans. That will free up about $500 million of capital Synchrony can use to invest in other partnerships or repurchase shares of stock.

Company guidance for 2019 implies that it will see solid, single-digit increases in total loans excluding the Walmart partnership, calling for core loan receivables to increase in a range of 5% to 7% in 2019.

With Walmart and Sam's Club behind it, Synchrony Financial is back to business as usual.