The rail company was able to post its best-ever adjusted earnings results thanks to some incredible operating efficiency.

Railroads are an effective method of moving goods over long distances, but they aren't typically a high-margin business. This past quarter, though, Canadian Pacific Railway (CP 2.38%) made large strides in operating efficiency such that it's turning the "railroads are low margin" idea into a myth.

Let's take a look at Canadian Pacific's most recent earnings results to see what went right, what management expects in 2019, and where things could potentially go wrong for the North American railroad giant. 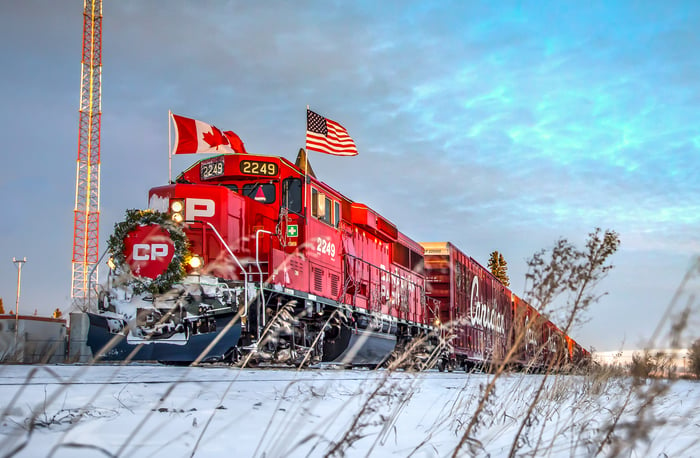 There are a couple of one-time events reflected in these results that make them look a little strange. For one thing, Canadian Pacific realized a considerable tax benefit this time last year from the changes to corporate tax rates in the U.S. This past quarter, though, it took a 118-million-Canadian-dollar charge related to U.S.-Canadian exchange rates on some debt denominated in U.S. dollars. Adjusting for these two things, earnings per share were CA$4.55 for the fourth quarter of 2017 and CA$3.22 for Q4 2018.

This was also one of those rare quarters where the company saw revenue growth in all nine of its reporting segments. The 16% increase in revenue adjusted for foreign currency fluctuations was an all-time high. As impressive as that result was, it was eclipsed by management's ability to control costs and move all those goods efficiently.

For the quarter, Canadian Pacific's operating ratio (industry lingo for operating margin, or operating expenses as a percentage of revenue) was an incredibly low 56.5%. That's 180 basis points better than the previous quarter. Even though fuel costs were up considerably (22% higher than last year), management was able to offset those costs with lower equipment rents and materials. 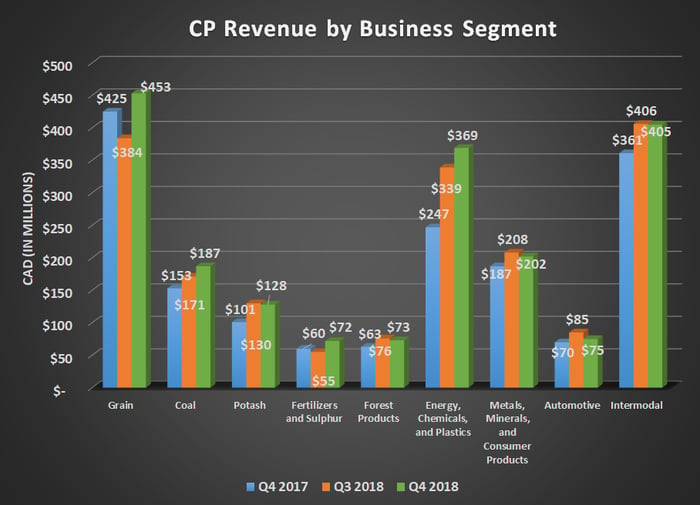 Along with these impressive results, management also gave 2019 guidance that calls for double-digit earnings-per-share growth with mid-single-digit volume growth on a per-ton-mile basis.

Just about every aspect of Canadian Pacific's earnings report looked good, and its guidance for 2019 is optimistic. On the conference call, though, CEO Keith Creel was asked where the company could see weaker results. Here's his response:

We're obviously concerned in and around crude [oil] space. So that's the greatest degree of uncertainty outside of the macro environment uncertainty we have with all the rhetoric that's going on about what may or may not happen in the U.S. But no material impact.

We still have very optimistic and robust demand reports from our customers. Until and unless I see consumer confidence really take a hit and consumer spending really slow down, I don't see it. Now obviously, the big concern remains for us the grain U.S. piece.

There's some uncertainty in that, but that was there in 2017 as well. We think we found the bottom, but who knows. We'll see what happens in the second half of the year. But at this point, outside of this couple of places, we see underlying streak in opportunity, optimism, and no pessimism yet.

You can read a full transcript of Canadian Pacific Railway's conference call here. 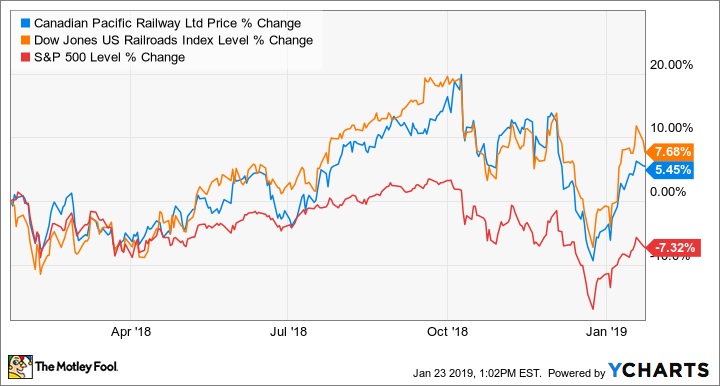 Will the other shoe drop?

It's extremely hard to find anything bad in this earnings report, and Canadian Pacific's guidance gives the impression that 2019 will be another record-setting year. On paper, Canadian Pacific looks like it's doing quite well, and the market has given it a considerable premium with a price-to-earnings ratio of 16, the highest ratio among its peer group.

The real concern for investors is that railroads are a cyclical industry that will wax and wane with the economy. Posting numbers this good is a sign that we are in a strong economy. The question that arises is: How much longer can this last? If you are optimistic that this economic surge can continue, then Canadian Pacific still looks attractive. If you think that we could be headed for a slowdown sooner than later, then it may be best to wait on the sidelines for a bit.