Please ensure Javascript is enabled for purposes of website accessibility
Log In Help Join The Motley Fool
Free Article Join Over 1 Million Premium Members And Get More In-Depth Stock Guidance and Research
By Daniel B. Kline - Updated Apr 22, 2019 at 1:18PM

The sports apparel company is partnering with Virgin Galactic to create the next generation of clothing for space travelers.

Space travel puts different demands on the human body than does life on Earth. From the heavy G-forces during liftoffs and landings to the zero-gravity conditions astronauts face in between, people traveling into orbit move -- and are moved by forces -- in ways that most of us never will experience.

All of that may sound romantic and nearly science-fictional, but as a purely practical matter, it also means that those traveling in space would benefit from clothes custom designed to meet this unique situation.

That's a tiny, tiny apparel niche, but demand for it will increase later this year when Virgin Atlantic brings space travel to the general public. What was once just an opportunity afforded to highly trained astronauts will be extended to anyone willing and able to buy a fantastically expensive ticket.

Under Armour (UAA 2.04%) (UA 1.19%) thinks it has the right stuff to fill this new need: It has signed on as the "technical spacewear partner" for Virgin Galactic, part of Richard Branson's Virgin Group. The two companies will work together to create custom space suits and footwear for Virgin's passengers and pilots. 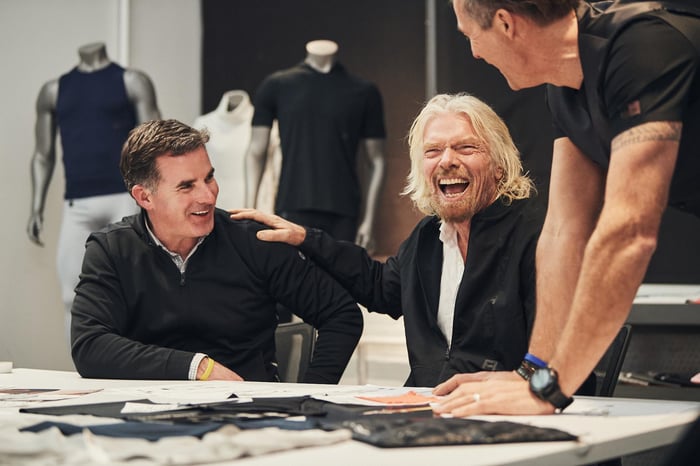 "Our partnership is built on the firm foundations of shared values, and it will be an absolute privilege to wear an Under Armour astronaut space suit on Virgin Galactic's inaugural commercial space flight," said Branson in a press release.

While aesthetics will play a role, the designers will also be aiming to balance "a complex blend of safety, utility, comfort, and style." This isn't just about creating outfits that look good. It's a chance to leverage what Under Armour has learned in the world of sports/athletic performance to not just create an apparel line, but build a program "for astronaut physical preparation and recovery with a focus on enhancing mobility, strength, fitness, nutrition, and sleep."

Under Armour will also design the uniforms for Virgin Galactic's ground-based staff at Spaceport America in New Mexico with outfits for engineers, astronaut trainers, hosts, and mission control operatives.

"I've loved [Under Armour's] determination to push technical boundaries in order to improve performance, so we could not have been more pleased when [Under Armour CEO] Kevin [Plank] and his talented teams stepped up to the considerable task of creating a range of space apparel and performance programs for Virgin Galactic," said Branson.

This isn't just about space

Under Armour isn't taking on this partnership because it expects that selling apparel to space tourists will become a meaningful part of its business. It will, however, get a number of benefits from its association with Virgin Galactic.

The first is, of course, publicity. The first commercial space flight will get significant media coverage, which will inevitably show off the outfits those involved are wearing (and probably lead to a reasonable demographic of consumers desiring the opportunity to buy Earth-optimized versions).

Second, the company will gain design insights from seeing how its outfits perform in space. Those may well translate into things it can put to practical use to design better-performing athletic wear.

This project shows that Under Armour isn't just making short-term moves in its effort to rebound from its recent struggles. Its leadership team is building longer-range strategies that are not as easy to predict. So, while this partnership won't impact the numbers for the next quarter, nor even the next several, it could help the company find its next transformative innovation.

"This is a great opportunity to test our innovation at the highest level and continue to push the limits of human performance," asserted Plank in the press release.

This isn't just a media stunt, though the media will certainly give the company's new gear some attention. (See -- we're part of the media, and you're reading this. It's working already.) It's a chance for Under Armour to boldly push into areas of design research where few apparel companies have gone before. Exactly how that will wind up benefiting the brand will depend on what it learns from this experience, but in one way or another, this relationship is likely to translate into advances for Under Armour's products down here on Earth, where most of the customers are.