Looking ahead is the only way to value this biotech.

bluebird bio (BLUE -2.50%) had a rough 2018, but it's still sporting a market cap north of $6.5 billion despite not having any drugs on the market. To justify that valuation, investors have to look to the future -- through its impending first approval and on to a second or third. One of Bluebird's slides presented at the J.P. Morgan Healthcare Conference earlier this month lays out the path forward. 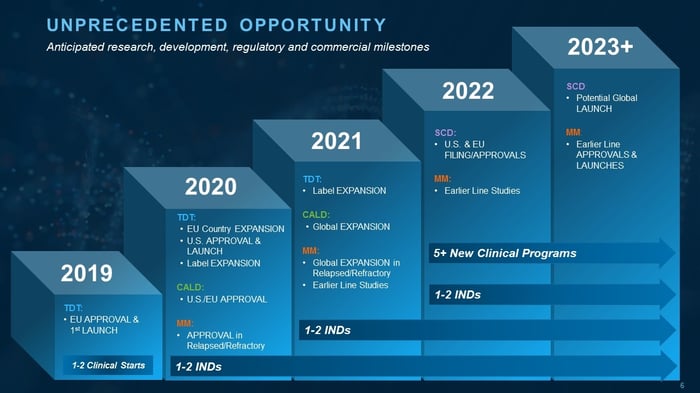 Near term: TDT and CALD

Bluebird's quickest path to sales comes from its gene therapy LentiGlobin to treat transfusion-dependent beta-thalassemia (TDT), a blood disorder in which patients require transfusions of red blood cells because they have defective production of beta globin. The LentiGlobin treatment pulls cells out of the patient and adds DNA that causes the cells to express beta globin, which are then put back into the patient.

Late last year, Bluebird submitted a marketing application to EU regulators, setting up a potential approval and launch this year. The U.S. is further behind, but the drug should be launched stateside next year. The data has looked good enough for approval in both regions, especially given the unmet need, although investors should keep in mind that regulators will also look at the complicated manufacturing process during the approval process to ensure repeatability, which is a bit of a black box for investors.

Also in 2020, look for an approval of another gene therapy called Lenti-D for cerebral adrenoleukodystrophy (CALD), a rare genetic brain condition that results in degradation of the myelin sheath that protects nerve cells.

Neither TDT nor CALD is a large market; the incidence of TDT is about one in 100,000, while CALD is about one in 20,000. Bluebird can make up for the small numbers with a large price tag, but it faces an uphill battle with U.S. insurers that may be unwilling to pay even if the treatments end up being cures. In countries with one-payer systems, the return on the cost will be more apparent because the healthcare system can reap benefits from not paying for a lifetime of treatment, but in the U.S., where people switch insurance carriers regularly, Bluebird will likely face challenges similar to those for other high-cost, one-time treatments.

Multiple myeloma, a type of blood cancer, is a fairly large market, but the initial approval for bb2121 will be limited to late-stage patients because that's the population that Bluebird and partner Celgene (CELG) tested the CAR-T therapy on. An approval could come in 2020, but results from studies in patients who haven't progressed as far will really drive sales in the 2023 range and beyond.

In addition to TDT, Bluebird is also developing LentiGlobin for sickle cell disease, which causes red blood cells to sickle due to abnormal hemoglobin, which can be counteracted with the expression of beta globin. The company had some issues getting the expression right, but it appears to be back on track for applying for approval in 2022, putting a global launch in the 2023 range.

Bluebird and Celgene have a follow-on CAR-T, inexplicably called bb21217. The data from the first 12 patients looked solid, but investors are going to have to wait for more data to see if the next-generation therapy produces a more durable response than its predecessor.

Bluebird is also looking to move one or two new drugs into clinical trials each year, leading to a well-stocked pipeline in the years to come. They're not all likely to be successful, but it's a numbers game, and having more shots on goal should result in more drugs reaching the market.