The global coffee giant continues to count on bigger tickets -- not traffic growth -- to drive sales growth in its existing store base.

Starbucks Corporation ( SBUX -0.16% ) reported first-quarter fiscal 2019 results on Jan. 24, pouring investors a hot cup of strong earnings growth. Maybe most importantly -- at least from the perspective of what Wall Street has wanted to see over the past few years --  the global high-end caffeine giant backed up what it delivered last quarter: solid same-store sales growth.

Starbucks reported 4% comps growth both in its U.S. stores and on a consolidated global basis this quarter. That matches last quarter's result in the U.S. while improving on its 3% comps growth sequentially.

Why does this matter? In short, because Starbucks spent much of the past two years seeing its comps growth fall from high single-digits to nearly flat only a few quarters ago.

The steady erosion of this once-strong metric for Starbucks had many investors worrying that the company had lost its formerly powerful ability to separate customers from a steadily larger amount of their money on a regular basis. Two strong quarters in a row seem to have largely addressed that concern. 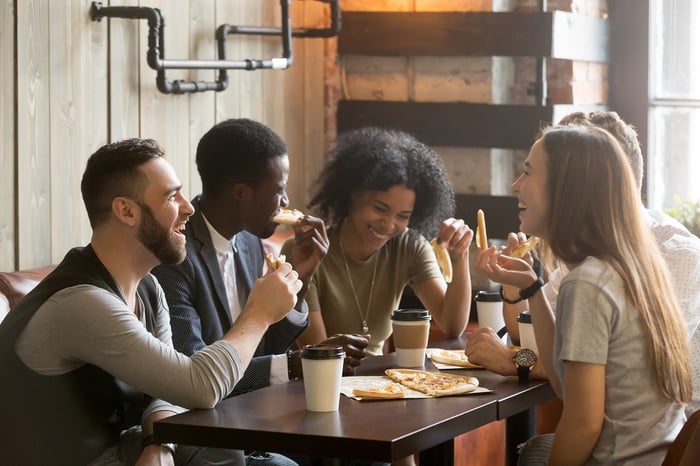 But there's one part of Starbucks' comp metric that investors should continue paying close attention to: traffic. According to the company's quarterly filing, Starbucks' comp growth is almost entirely due to customers spending more money, not an increase in the number of customers. Let's take a closer look at the Starbucks report and why the specifics of the comp results bear watching closely.

A closer look at Starbucks' financial and operating results

By most measures, Starbucks delivered a great quarter. Revenue came in at $6.6 billion, up 9% from last year, while non-GAAP (generally accepted accounting principals) earnings per share (EPS) increased 15%. GAAP EPS declined 61% from last year, but last year's result included a number of one-time gains related to the acquisition of all mainland China stores from a joint venture partner, as well as the divestiture of several other business units. Starbucks excludes these one-time items in its non-GAAP results.

The company opened 541 net new stores in the quarter, increasing the count by 7%, with two-thirds of stores opening outside of the U.S. Meanwhile, international markets continue to be Starbucks' biggest opportunity for future expansion.

In short, the shift from a licensee in China to a company-operated model was expected to drive down operating margin, but the upshot is that those lower operating margins came from a much bigger revenue number. As a result of Starbucks taking over operations of its Chinese stores, the China/Asia Pacific segment generated almost $25 million more in operating income -- a 13% increase.

Another look at comps and why it matters

As previously stated, Starbucks managed to repeat last quarter's solid 4% comps growth in its U.S. store base and improve its global comps growth from 3% to 4%. That's unequivocally a good thing because it demonstrates that the company continues to have pricing power and its efforts to grow add-on sales of things like food items is paying off. People are indeed spending more money every time they come to Starbucks.

But investors should continue monitoring the story that recent comps growth isn't coming from more orders. If we look at Starbucks' geographical segments, the transaction count was flat in the Americas segment, declined by 1% in EMEA (Europe, Middle East, and Africa), and was up 1% in China/Asia Pacific. In Starbucks' two most important markets, the U.S. and China, transactions were flat and down 2%, respectively.

There are a couple of takeaways. First, flat traffic isn't ideal. At some point, higher prices and add-on items will reach critical mass and won't deliver the kind of comps growth that's played a big role in Starbucks' double-digit profit growth. Furthermore, Starbucks' strategy to expand delivery, add mobile ordering, and expand the selection of food and beverages to grow sales during non-morning day parts was expected to pay off with more traffic throughout the day. So far, those efforts haven't really paid off with growth in overall traffic.

But if we take it a step further and look at Starbucks' comparable traffic results with some of its more recent quarters, there's evidence that things are better. If we look at its fiscal third-quarter report last July, things are now heading in a better direction. In that quarter, Starbucks reported a 2% decline in transactions in every segment except China/Asia Pacific, and that segment reported a 3% decline in transactions.

Within that context, flat transactions is a step in a much better direction.

As we move forward into 2019, Starbucks should face a relatively favorable comp opportunity. After several quarters of declining comparable transactions, it looks like the company has started to see some benefit from a number of growth initiatives. If that trend continues, the company could actually deliver higher traffic counts in coming quarters as it "laps" last year's weak results.

At the same time, the company says it will open 2,100 net new stores during the full year, with more than half of those located in China/Asia Pacific. (Six hundred alone will be in China.) As we saw in the first quarter when it opened over 500 new stores, Starbucks remains a growth company.

For the full year, revenue is expected to grow 5%-7% after a 2% negative impact related to some corporate streamlining, including divesting some company-owned stores to licensees. This will boost operating margins in regions like EMEA, where licensed stores are the focus, while operating margin in the Americas is expected to decline slightly due to increased planned spending on employee benefits and growth investments.

2018 was challenging for Starbucks on a number of fronts, including retail traffic, struggles with its retail tea business, and a shift in its corporate-owned stores versus licensed-stores model in several regions including China and Europe. As Starbucks moves into 2019, we're seeing some of the fruits of those efforts pay off. However, there remains work to be done to grow traffic and deliver on the promise of its many growth initiatives.