The company says it's restructuring, but it needs to find its footing in this market soon.

Last week, Apple (AAPL 1.91%) cut about 200 people from its secretive project for an autonomous vehicle system, known internally as Project Titan. CNBC reported that while some employees were being laid off, others were being moved to other teams at Apple.

In a rare move, an Apple spokesperson told CNBC: "We have an incredibly talented team working on autonomous systems and associated technologies at Apple. As the team focuses their work on several key areas for 2019, some groups are being moved to projects in other parts of the company, where they will support machine learning and other initiatives, across all of Apple."

The spokesperson added that there are huge opportunities in autonomous vehicle systems and that Apple "has unique capabilities to contribute" in this area.

This latest news comes one month after Alphabet's (GOOG 1.67%) (GOOGL 1.73%) Waymo launched the first-ever commercial ridesharing service, called Waymo One, and just days after Waymo said it's opening a factory in Michigan to build autonomous vehicles. 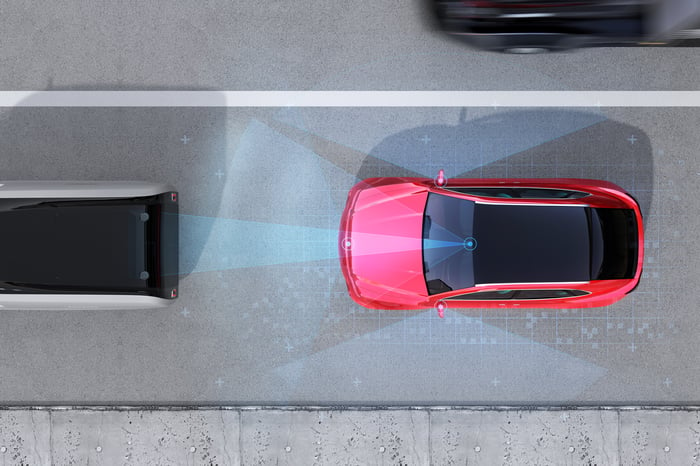 Apple's autonomous vehicle ambitions aren't dead yet, but may be stalling

Apple has been rumored to be working on self-driving vehicle software for several years, and the company recently disclosed in a court filing that it has 2,700 "core" employees working the project. Back in August 2018, Apple hired back its former vice president of Mac hardware, Doug Field, to head up Project Titan. Field was in charge of Tesla's Model 3 production for several years before coming back to Apple.

Apple said the new layoffs are part of a restructuring, which makes sense considering that Field may be setting up Project Titan the way he wants after being on the job for a few months.

But the cuts also show how far Apple is behind its competition. Waymo's service, launched in December, allows select riders in the Phoenix area to use a self-driving vehicle for short trips to the store, going to work, or dropping kids at school. Waymo is expected to launch its service in more cities later this year, and the company's recent announcement to build autonomous vehicles at its own factory could allow it to speed up its rollout.

Apple's latest layoffs could be exactly what the company said they are -- just a restructuring -- or they could be an indication that the company hasn't quite figured out its vision for an autonomous vehicle system. Either way, there's no debating that Apple is falling further behind Waymo in the self-driving vehicle market.

Don't expect Apple to give up

Intel believes autonomous vehicles will create a $7 trillion "passenger economy" by 2050, and IHS Markit estimates that by 2040 there will be 33 million autonomous vehicles sold annually. With those figures in mind, this market is just too big for Apple to ignore.

The company may be far behind what Waymo is doing, but Apple doesn't have to be the first to market to benefit from autonomous vehicles. It's entirely possible that future self-driving services will run on competing platforms, just like most of the world's smartphones run on Google's Android or Apple's iOS.

But Apple is indeed under the gun now to catch up to its rival. Waymo has 10 million miles of real-world testing with its vehicles and 7 billion virtual miles driven, and is poised to expand its new service this year. If Apple wants to become a dominant force in the autonomous-vehicle software space, it'll need to make huge progress in the next few years.