Credit Suisse upgrades before earnings -- but not because of earnings.

Next Thursday, restaurant ordering-and-delivery service Grubhub (GRUB) is set to report its financial results for fiscal Q4 2019 -- and for fiscal 2019 as a whole.

Prepare to be disappointed.

Analysts following Grubhub warn that earnings are set to fall steeply, with per-share profits of perhaps $0.28, down nearly 25% from a year ago. Despite this dire warning, though, this morning investment banker Credit Suisse put out a report advising investors to buy Grubhub stock. 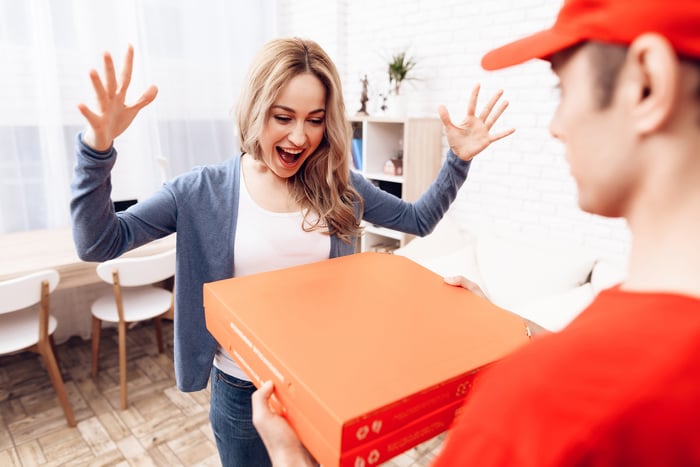 An upgrade before earnings, but not because of them

Mind you, Credit Suisse isn't saying that other analysts are wrong to expect a big earnings decline at Grubhub. To the contrary, not only does the analyst not dispute predictions of an earnings downturn in Q4, but it goes so far as to predict that Grubhub's EBITDA guidance for fiscal 2019 will fall short of analyst estimates, potentially provoking a "negative investor reaction," says StreetInsider.com (subscription required) in a note on the upgrade.

Grubhub, you see, is spending heavily to "accelerate diner growth by broadening delivery coverage areas and increasing marketing spend," as company CFO Adam DeWitt said last quarter, raising its spending on "investment in growth" to "substantially more than $200 million" in 2018.

In today's report upgrading the stock to outperform, Credit Suisse predicts that such "recent initiatives" will be "accretive, opportunistic, and conducted from a position of strength." In other words, Grubhub is spending not just to keep pace with rival food delivery services such as UberEats and Postmates, but rather to expand its lead over its rivals and deliver even greater profitability in the future.

Because with $137 million in trailing profits and $172 million in trailing free cash flow, Grubhub is already profitable, and growing more so by the year (Q4's expected disappointing numbers notwithstanding). In fact, from 2013 to 2018, S&P Global Market Intelligence data shows that Grubhub has grown its reported GAAP profits by a factor of 20 times, even as its stock market value has only increased 140%.

It's also got a lot of room left to grow.

As Credit Suisse explains, "Of the top 20 U.S. restaurant chains ... Grubhub has a meaningful presence with only six" presently. Furthermore, "Of the top 100 restaurant chains in the U.S. ... only 26 have a meaningful presence on Grubhub." As the company invests to get customers of the chains it already services to use Grubhub more often -- and brings new client chains on line as well -- Credit Suisse estimates it will grow fast enough to drive as much as a 62.5% increase in Grubhub's stock price, from today's $80 and change all the way up to $130 per share.

Is that valuation realistic?

It depends on how you look at the numbers. On the one hand, based on its price-to-earnings ratio of 53 -- or even its price-to-free-cash-flow ratio of 42 -- Grubhub stock already looks overpriced relative to the 30% annualized earnings growth rate that Wall Street projects for it.

But here's the thing: Wall Street's forward-five-year earnings estimate works off of last year's $1.12-per-share profit that Grubhub earned -- earnings that are expected to decline in 2018 as the company invests heavily in growth, thus dragging down the overall rate. Focus on forward earnings, however, and analysts are currently expecting Grubhub to resume growing earnings in 2019 (bringing in about $0.99 per share) -- then to nearly double that by 2020 ($1.91 per share), and more than double two years later ($4.20 per share in 2022).

Averaged out, that works out to a forward growth rate of closer to 43.5% per year coming out of Grubhub's 2018 slump, and a 43.5% growth rate is in fact fast enough to justify the stock's 42 times FCF valuation. At least, it seems so to me -- and apparently, to Credit Suisse as well, regardless of how bad earnings or near-term guidance end up looking next week.

And so, the analyst's advice: "[W]e would use any potential pullback to either increase or initiate a position on GRUB shares."