Shares of the programmatic advertising service have been volatile lately. Is now a good time to buy?

The Trade Desk (TTD 1.55%) has been one of the best-performing stocks on the market since its 2016 IPO. Shares of the digital ad-buying specialist have jumped 164% over the last year and are up 350% since their September 2016 debut, as the chart below shows. 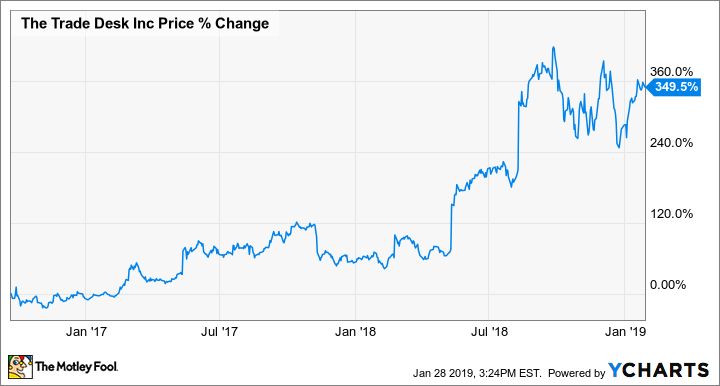 The company has benefited from a burgeoning wave in digital advertising as Alphabet and Facebook have built some of the biggest businesses in the world on the power of online ads. At the other end of that equation, thousands of businesses and advertisers are trying to successfully market their products, and their ad agencies turn to The Trade Desk to manage and optimize their digital ad campaigns and spending, which has driven the company's rapid growth.

Unlike some other tech stocks, The Trade Desk is highly profitable, with a profit margin of 23% through the first three quarters of 2018 and a net income of $48.7 million. The company is also putting up blockbuster top-line growth, with revenue up 54% through the first three quarters.  While those numbers and the stock's track record make the stock look appealing, past performance is not a guarantee of future success. Let's take a closer look at where Trade Desk stands today to determine if it's a buy. As the numbers above show, The Trade Desk has been growing briskly, both on the top and bottom lines. After the stock surged on two consecutive earnings reports, shares have been volatile in recent months due in part to the market turbulence. However, The Trade Desk continues to raise the bar, hiking its guidance in each of the last three quarters. The stock trades at a P/E of 56 based on this year's expected earnings per share (EPS), and though that valuation is high, it seems more than justified by the growth ahead in the digital ad market. According to International Data Corporation, global digital advertising spending is expected to grow from $229 billion in 2017 to $360 billion in 2021, making up nearly half of the total advertising market.

Though the pace of growth is expected to slow, the primacy of digital advertising should help drive more customers on to The Trade Desk's platform.

Like many online platforms, The Trade Desk has built-in switching costs, or features that make it undesirable for customers to leave, helping to keep them locked into the service. For instance, unlike some of its competitors, The Trade Desk does business based on Master Service Agreements that last for a certain period of time, rather than campaign-specific contracts. Reflecting the popularity of its platform and the effects of its switching costs, The Trade Desk's customer retention has been above 95% for each of the last three years. The company also says that its customers tend to scale up their use of the platform over time, making them more profitable. The Trade Desk charges customers based on a client's total spend on advertising and other features through the platform, and it counts some of the biggest advertising agencies in the world, including WPP, Omincom, and Publicis, among its biggest clients.

Another advantage The Trade Desk has is that its platform is self-service, so the business model operates similarly to a subscription business. Once the technology is in place, every incremental user should be more profitable than the last, as the company is adding revenue on a similar cost base. As The Trade Desk matures, that function should drive its already high profitability higher. Currently, the company is investing aggressively in areas like platform operations, which includes hosting costs and client training and support, and technology and development to enhance its product features and inventory as it seeks to expand. But over time, it should generate expanding profit margins. In fact, growth in sales and marketing costs have already begun to moderate compared to revenue growth.

Like any other company, The Trade Desk faces competition, including from entrenched tech giants like Google and Adobe as well as smaller players, but as an independent provider with a singular focus on ad agencies buying ad inventory, The Trade Desk has a different value proposition from many of its competitors. Similarly, the future of programmatic ad buying is uncertain, but the digital ad market seems destined to grow, because it offers a number of advantages over traditional advertising, including the targeting and tracking that help make a platform like The Trade Desk's so valuable.

The biggest risk for investors in the near term may be a recession as some economic signals, including a slowing housing market, are starting to indicate. Not only do recessions hit high-priced stocks like The Trade Desk harder than the average stock, but the advertising market also tends to be susceptible to economic slowdowns, as advertisers tend to cut back when consumers have less to spend. For example, Google's revenue growth nearly ground to a halt at the nadir of the financial crisis, increasing by just 2.9% in the second quarter of 2009.

While a recession would certainly cool off The Trade Desk's rapid growth, the stock still looks like a smart long-term buy. This company has a leading position in a fast-growing market; it's also growing its top line quickly and putting up ample profits. As the company's retention rate shows, customers are happy with its service, and its customer count continues to expand.

Though the stock's volatility could continue in the short term given macroeconomic factors, in the end the long tail of growth ahead should more than justify The Trade Desk's current price tag.