Roth Capital doesn't hate it as much as it used to -- but can't bring itself to love Plug Power.

This, in a nutshell, is the argument Roth Capital makes today as it upgrades Plug Power, removing its sell rating but upgrading it only to neutral with a price target of $1.30. 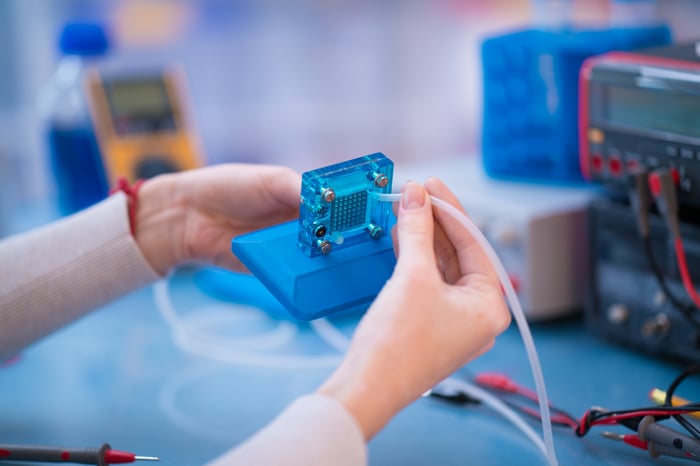 Can Plug Power put together a profit in 2019? Image source: Getty Images.

An upgrade in name only

StreetInsider.com (subscription required) has the details. In its note, Roth explains that Plug Power stock today is priced to reflect the risks and opportunities of the business (it's just pennies above the analyst's target price). Having signed agreements to award both Walmart and Amazon.com warrants to purchase its stock promises to improve "revenue visibility" for Plug Power, as we know that, when Plug shares hit a certain level, money will probably come into the business as Walmart and Amazon exercise those warrants.

At the same time however, each warrant exercised will be a new share of Plug Power issued. This, says Roth, will "erode" the company's "quality of revenue/margin/earnings," both because the money coming in will come from selling stock (not products), and because any profits earned on products that are sold will be divided up among more shares outstanding.

What exactly is Roth talking about here? Let's revisit the example of the Walmart deal for context. In 2017, Plug signed a deal with Walmart whereby the company planned to install "GenKey" hydrogen fueling stations at "up to 30 additional Walmart sites in North America over the next three years, with ten sites already under contract and scheduled to be finished by the end of 2017." Plug expected the deal to generate "around $80 million" in revenue.

As part of that agreement, Plug also gave Walmart warrants to acquire "up to 55,286,696" shares, exercisable once Plug stock hits a price of $2.1231. Exercised in full, share purchases by way of these warrants could provide the company with up to $117.4 million in much-needed cash (about two-thirds of its annual revenue stream) -- but exercised in full, they would also dilute existing Plug shareholders by more than 19%.

That deal mirrored a similar arrangement struck with Amazon a few months earlier, awarding the same number of shares -- but at a much lower $1.1893 strike price. That's another 19% worth of potential dilution. Combined, these deals could potentially cut existing Plug investors' share in the company's profits by more than 38%.

Of course, that's assuming Plug Power can sell enough fuel cell systems to actually earn profits. You see, Roth worries that Walmart (at least) won't be spending a lot of money buying hydrogen fuel cells from Plug this year, because "2019 [will] be the year of the lithium ion electric lift truck" at Walmart, and money the retail giant spends "taking material lithium battery volumes" will necessarily be money it doesn't have to spend on other green power initiatives, such as fuel cells. Roth predicts this will result in "weak orders to PLUG" from Walmart, at least initially.

As for Plug Power, it's hoping to sell more than just warrants in 2019. Earlier this month, management estimated the company did between $182 million and $185 million in "gross billings" last year, and hopes to grow that number to somewhere between $235 million and $245 million in 2019, producing "positive adjusted EBITDA" in the process.

As I've previously explained, though, there's a big difference between "positive adjusted EBITDA" and actual GAAP profitability. The sad fact remains that the company hasn't earned a full-year profit even once in its 22-year history.

Granted, hope still springs eternal -- some analysts predict Plug will finally turn a profit in 2021. But these same analysts have been wrong before. As for Roth Capital, its position is: "We remain skeptical about the company's 2H19 timeline for suggested EBITDA profitability."

John Mackey, CEO of Whole Foods Market, an Amazon subsidiary, is a member of The Motley Fool’s board of directors. Rich Smith has no position in any of the stocks mentioned. The Motley Fool owns shares of and recommends AMZN. The Motley Fool has a disclosure policy.