Even Honda is feeling the pressure to discount.

Honda Motor Company Ltd. (HMC 0.39%) says that its operating profit in the quarter that ended on Dec. 31 fell 40.2% from a year ago, to 170.1 billion yen ($1.55 billion), on a shift toward less-profitable models and higher recall-related costs.

But despite the decline in quarterly profit, Honda slightly boosted its revenue and per-share earnings guidance for the full fiscal year. 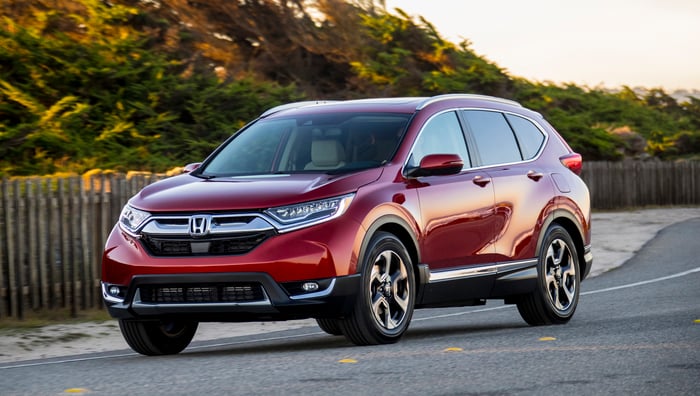 Like many Japanese companies, Honda uses a fiscal year that runs from April 1 through March 31. The quarter that ended on Dec. 31, 2018, was the third quarter of Honda's 2019 fiscal year.

Honda's auto sales rose 4.8% from the year-ago period, on strong gains in China and Japan and continued good results in North America. But automotive revenue fell 1.4% to 2.86 trillion yen ($26.1 billion), due to a weaker mix of products sold. The mix effects had a more drastic effect on the bottom line, as automotive operating profit fell 75.4% to 41.2 billion yen ($380 million). Honda's automotive operating margin was just 1.4% for the quarter, down from 5.8% in the year-ago period.

Global sales of Honda motorcycles rose 2.9% from a year ago, as higher sales in Vietnam, Indonesia, and Brazil more than offset a modest sales decline in North America. Operating profit rose 7.3% to 69.5 billion yen ($630 million), with a margin of 13.5% (up 0.5 percentage points from a year ago).

Revenue in Honda's power products business rose 6.3% from a year ago on a 13% increase in sales, but the unit swung to an operating loss of about 900 million yen ($8.2 million) from a profit of 1.5 billion yen a year ago, on increased expenses and unfavorable currency effects.

Honda boosted its revenue and net income forecasts for the fiscal year that will end on March 31. It now expects: