For the second year running, Toyota (NYSE:TM) has the most popular car in the U.S., its RAV4 crossover vehicle, which beat out the Nissan Rogue and Honda CRV for the top spot. In fact, Toyota has four of the top 10 best-selling cars, more than any other auto manufacturer.

Yet despite being one of the biggest automakers in the world, Toyota's stock has lost more than 12% over the past year. A depressed stock doesn't mean the company is a bad investment, though. It could be a chance to buy a great business at a discount. So let's take a look at whether Toyota could turn investors into millionaires by buying shares today. 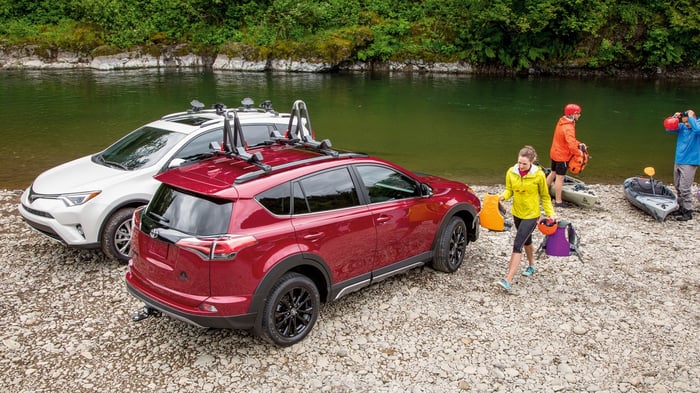 Out of the gate, Toyota is facing an uphill battle. The U.S. automotive market just managed to eke out a 0.6% gain in sales from last year to 17.33 million vehicles. Even worse, analysts are forecasting lower sales for the next two years at least. That's not just in the U.S., but globally as well.

Aside from the U.S. market slowing, China is seen as the greatest risk to auto sales, and automaker profits are expected to diminish. Germany's Center of Automotive Management says, "[T]he "fat years" in the automotive industry are over for now. Rather, technological, economic and political changes are now announcing difficult times for the industry, which should significantly reduce profits and returns over the coming years."

With more expensive technological innovations expected for the industry, such as more advanced electric cars and autonomous vehicles, along with an animus against gas-powered cars in numerous foreign markets, automakers are expected to face a difficult immediate future.

The future, it's electric!

Toyota has never been a high-growth company, and even though its four U.S. manufacturing plants insulate it from fallout from any escalating trade tensions, the auto market has fallen out of favor.

Its Prius remains a leader in the hybrid vehicle market, but sales continue to fall (down 19.4% in the U.S. last year).  Toyota has also failed to make it into the all-electric market. The closest it has come is the plug-in Prius Prime.

It said last year it would introduce 10 electrified vehicles by the end of 2020, but those efforts are going to be aimed at the Chinese market because of the country's lucrative EV incentives. How it intends to market EVs to the rest of the world remains unknown, as is the meaning of "electrified." That can mean more than just a pure electric car.

Buy a lottery ticket instead

The foregoing doesn't mean Toyota is necessarily a bad investment, but it's not going to be a millionaire-maker for anyone anytime soon.

Not that an investor should be trying to make a cool million on a single stock in a short amount of time, but even for those with more appropriate long-term investing horizons, it would be hard put to see Toyota stock turn into a million-dollar bet.

The auto market is very cyclical and is just entering what is expected to be a multiyear downturn. Even though Toyota pays a healthy dividend of $3.93 per share that yields 2.8% currently, an investor is going to need to wait a very long time to see a million-dollar return on their investment.

So in the long run, it's not impossible for Toyota to be a millionaire-maker stock, just improbable. And as economist John Maynard Keynes noted, in the long run, we're all dead. Investors would likely be better served putting their money in other vehicles than into this carmaker.