Please ensure Javascript is enabled for purposes of website accessibility
Log In Help Join The Motley Fool
Free Article Join Over 1 Million Premium Members And Get More In-Depth Stock Guidance and Research
By Billy Duberstein – Updated Apr 14, 2019 at 12:18AM

Think stocks on the cutting edge of AI are expensive? Think again.

Prepare yourself -- the super-intelligent machines that used to be the stuff of science-fiction movies are now becoming reality. Thanks to giant strides in big-data collection and processing, machines can now be taught to recognize speech, images, and writing and even understand entire industries. Once trained, computers can interpret incoming information and react accordingly.

These super-human artificial intelligence (AI) capabilities are working their ways into just about every industry, and they are becoming huge competitive advantages to the companies that best employ them.

You may think the stocks at the forefront of this tech revolution would trade at sky-high valuations, but as the following three names show, that's not necessarily the case. 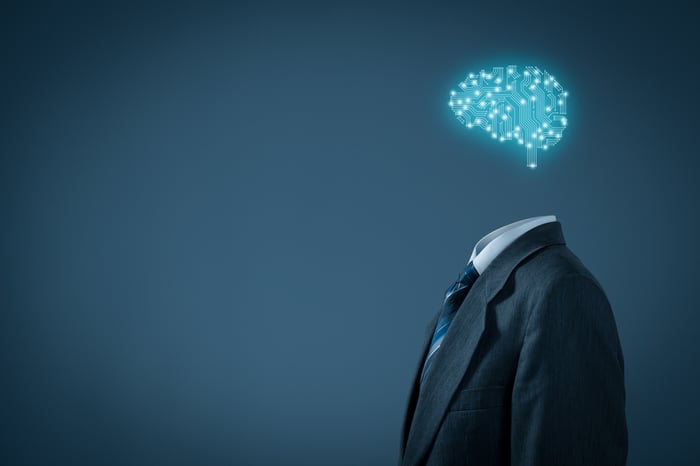 That year, Alphabet unveiled its AI Tensor Processing unit, an accelerator specifically designed for machine learning neural networks. TPUs are ideal for high-volume, low-precision computing tasks that make them especially useful for processing massive amounts of data. TPUs are available only in Google's Cloud platform, where they work alongside third-party graphics processing units (GPUs) and central processing units (CPUs), though Google has begun renting these proprietary TPUs to outside customers.

AI has come to permeate all of Alphabet's businesses –- even the company's "old" search engine business. In 2016, Google installed its then-head of AI to lead the search business, and soon found that machine-learning algorithms executed search results even better than human-constructed algorithms.

AI is also at the center of Alphabet's "Other Bets" segments, made up of transformative, "moonshot" projects. One example is the Waymo One self-driving taxi business, which is now driving passengers around Phoenix and could be coming to a town near you in the not-too-distant future.

You may think that all of this innovation would come at a sky-high valuation, but Alphabet trades at a quite reasonable 23 time forward earnings. If you strip out its $100 billion-plus in excess cash, that valuation comes down to just 20.

That's a huge bargain for not only the world's dominant search engine, but also several Other Bets that currently make no profits, but could one day be worth hundreds of billions of dollars.

While Google has its own TPU chips, it still uses GPUs from gaming chip giant Nvidia (NVDA -0.66%). Nvidia's business began in video gaming GPUs, but as the world soon found out, graphics processors -- which can perform many more calculations at once than CPUs -- were also highly beneficial to the compute-intensive workloads AI requires. The only problem? That data must be translated into a form that a graphics chips can interpret.

Nvidia thus invented its CUDA software platform in the mid-2000s, which finally allowed massive amounts of data to be translated into familiar programming languages on graphics chips. That innovation proved prescient, as Nvidia's GPU chips and CUDA platform proved the ideal combo for the age of big data and artificial intelligence.

With all this going for it, Nvidia's stock has nevertheless been crushed over the past six months, and now trades at a sub-20 P/E ratio. This has been due to a toxic combination of the Chinese slowdown, a pause in data center investment by cloud giants, and the crash in cryptocurrencies.

Nevertheless, I expect data center investment to pick up after the cloud giants digest their current investments. Since Nvidia's CUDA platform gives it a strong competitive advantage over competitors, I expect the stock to bounce back once this slowdown passes.

Another stock suffering from the same temporary headwinds as Nvidia is Micron (MU 0.18%). If you think Alphabet's and Nvidia's stocks are cheap, how about a P/E ratio of 3.3?!

That's not a typo, but rather par for the course for Micron, which has traditionally been an extremely cyclical stock. Micron produces DRAM memory and NAND flash storage products, both of which will see exponential demand in the coming age of AI. Nevertheless, memory prices can fluctuate wildly from quarter-to-quarter based on supply and demand, and currently we are in a period of memory price declines.

Still, artificial intelligence servers will need up to six times the amount of DRAM and twice the amount of NAND flash as a traditional server, and AI servers will become an increasing portion of cloud servers going forward. Micron is one of only three producers of DRAM worldwide. With only two competitors, the industry should be able to keep supply under control, even while demand for DRAM booms over the next decade.

That makes the near-term swoon a huge opportunity for long-term investors to pounce on this dirt cheap memory stock.