Shares of Norfolk Southern (NYSE:NSC) gained 12.2% in January, according to data provided by S&P Global Market Intelligence, thanks to fourth-quarter results that beat expectations and growing investor confidence that the railroad's efforts to streamline operations are showing results.

Norfolk Southern in late January reported fourth-quarter earnings per share of $2.57, up 52% year over year and well ahead of Wall Street's $2.29 consensus. It's worth noting that $0.33 per share in earnings were the result of land sales and not of operations, but operating income of $958 million excluding the land sales still beat the $951 million consensus expectation.

The company is in the early stages of implementing precision scheduled railroading (PSR), an operating philosophy designed to make railroads more efficient that was pioneered in Canada and is now making its way to U.S. companies. Norfolk Southern calls its initial plan "clean sheeting," a reference to it starting from scratch in local markets to develop new operating plans in collaboration with key customers. 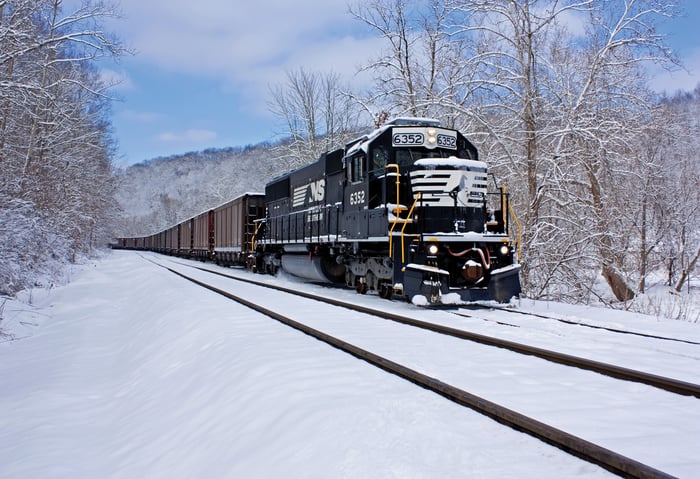 The initial evidence suggests that the push is having the desired effect: Norfolk Southern's operating ratio -- a measure of total expenses relative to its revenue -- was down more than 4% from a year prior to 62.8%. The railroad also stored more than 300 locomotives in the fourth quarter and returned another 100 leased locomotives yet still handled a record volume for the year.

Norfolk Southern will detail its outlook for 2019 on Feb. 11 at an investor meeting in Atlanta. Investors will hope to hear some specifics about the company's PSR plans, including what steps will be taken in the second half of the year as the clean-sheeting work nears completion.

It's been a positive start to the year for the railroads. U.S. carloads are up 1.7% in January compared to 2018, according to Association of American Railroads data, thanks to the continued strength of the U.S. economy and strong demand from the petroleum and chemicals sectors in particular.

I expect management to talk up its streamlining plans at the meeting and to show continued improvement in the quarters to come. In the meantime, Norfolk Southern shares look attractive even without further cost cuts: The company boasts one of the highest dividend yields in the sector, and its valuation, at 17.72 times earnings, trails industry leader Union Pacific by more than 10%.

Norfolk Southern is on the right track.