A little while back, The Information reported that Apple (NASDAQ:AAPL), which is renowned for building some of the world's best smartphone applications processors, is developing its own cellular-modem technology, presumably for use in products like the iPhone, iPad, and Apple Watch.

While other smartphone chipmakers -- both merchant vendors that make their money selling chips to third-party smartphone makers, as well as direct competitors to Apple itself -- have long built and sold their own modems, Apple has historically relied on third parties for modem supply.

According to a new report from Reuters, Apple has made an internal organization change that lends further credence to the fact that the company is, in fact, building its own modems. Let's take a closer look and put this into bigger-picture perspective. 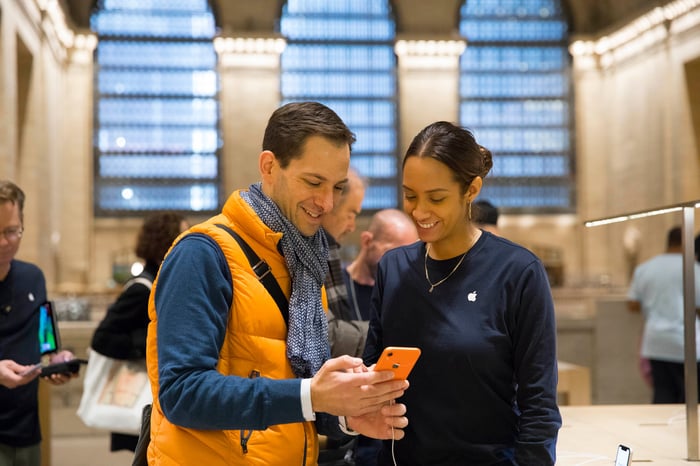 According to Reuters, Apple "has moved its modem chip engineering effort into its in-house hardware technology group from its supply chain unit." This, the publication said, is "a sign the tech company is looking to develop a key component of its iPhones after years of buying it from outside suppliers."

That conclusion isn't far-fetched at all. If Apple is procuring modems from third parties, it would make sense to put modem engineering under its supply-chain unit, since Apple isn't building the product itself but working closely with third parties to develop products that meet Apple's technical and timing needs.

However, if the company is building its own modems, it would only make sense to put those efforts under the individual who oversees the development of the company's in-house chip technologies -- Johny Srouji. And that's exactly what Reuters reports Apple is doing.

Although it's not clear when Apple might deploy its own cellular modems, the reality is that when Apple has put its vast resources behind bringing chip technologies in-house, those efforts generally yield compelling in-house solutions over time.

Apple's applications processors have evolved significantly over time as the company built up expertise in various areas of chip design. Apple's very first in-house applications processor, the A4, relied heavily on intellectual properties -- such as CPU and GPU cores -- developed by third parties. Today, however, Apple's latest A12 Bionic chip incorporates custom-designed CPU cores -- and the performance of those cores, according to AnandTech's testing, is miles ahead of what the competition has to offer -- custom-designed GPU cores (which also appear to be best in class), a dedicated Apple Neural Engine for artificial intelligence tasks, and a lot more.

Apple isn't just a device company that does chip design on the side. The company's chip prowess is integral to enabling the performance and capabilities of its latest devices.

Given that Apple has demonstrated one success after another in developing complex, differentiated chip technology under Srouji's leadership, I don't find it hard to believe that the company is not only going to take a serious crack at building its own cellular modem technology to support its product lines, but that it'll succeed in building great modems.

While there might be some cost advantages for Apple to build its own modem technology rather than buy it from a third party, as I've indicated before, I don't think that would be the main motivation for Apple here, especially given how expensive and risky developing modems ultimately is. Instead, this seems to be about Apple trying to take control of a technology critical to the product line that makes up the bulk of the company's revenue (iPhone) and putting more of its fate in its own hands.

To be clear, I don't think in-house modem development is going to yield some massive competitive advantage for Apple, nor is it going to fundamentally transform the company's overall product cost structure. What those efforts should ultimately deliver, though, is control of a component that's fundamental to the company's biggest revenue and profit source -- iPhone. If I were an Apple shareholder, I'd say that whatever Apple is investing in these efforts is well worth it, even if the only real return is peace of mind.