The biggest-ever biotech IPO heralds enormous promise for a new class of medicines.

The sheer size of the December initial public offering of Moderna (MRNA -1.76%) stock, the largest ever in the biotech industry at $604 million, might have been enough to get the attention of the average stock investor. But the fact that the "unicorn" had attracted $2.6 billion from private equity, hired 735 employees, and built a 200,000-square-foot manufacturing facility before shares were even offered to the public was a strong indication that investors with deep pockets were already firm believers in the value of the company. Should individual investors hop on for the ride, or have the early investors already made all the easy money?

It's no mystery why Moderna has attracted so much investment. The company isn't simply pursuing commercialization of a few drug candidates. It's building a platform to create an almost limitless number of drug candidates in an entirely new class of medicines based on messenger RNA (mRNA). 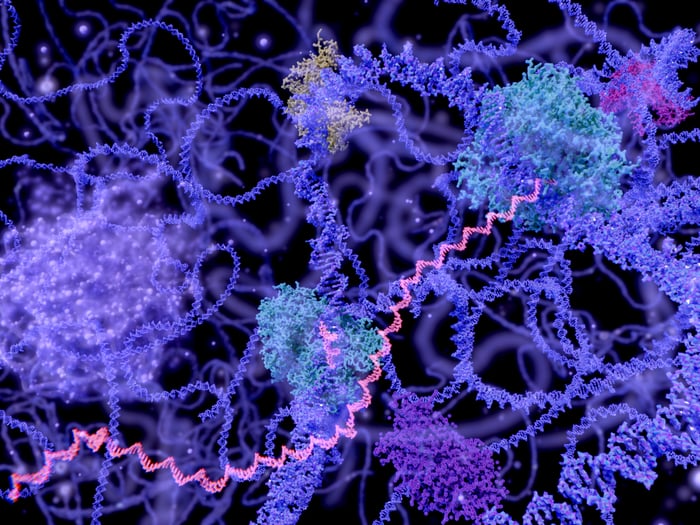 Molecules in a cell nucleus. The pink strand is mRNA. Source: Getty Images.

Programming the body's own protein factories

Moderna refers to mRNA as "the software of life." Nearly every function in the body is carried out by proteins, which are manufactured by ribosomes, found within all living cells. The sequence of amino acids required to produce all proteins is encoded in the double helix of DNA in the nucleus of the cell. Messenger RNA is a molecule that carries that genetic code from the nucleus to the ribosome in the cytoplasm, bringing with it the complete set of instructions for production of a protein.

Moderna's approach is to splice information into mRNA that will direct cells to produce naturally occurring proteins that have therapeutic value in treating or preventing disease. Companies that are working on editing DNA, such as CRISPR Therapeutics, Editas Medicine, Intellia Therapeutics, and Sangamo Therapeutics, are also striving to change the proteins that cells produce, and investors have tuned in to the enormous potential in these gene-editing stocks. Moderna is taking an arguably simpler and potentially safer approach not by affecting the blueprint stored in DNA but by introducing customized instructions for protein synthesis to the cell's protein factories.

Moderna has put a tremendous amount of effort into the building of the platform rather than initially focusing on specific drugs. The company has developed a set of computer programs and automated manufacturing tools that allow it to produce experimental mRNA medicines in a very short time. The company's scientists start with a protein that they want to "turn on" in the body to fight or prevent a disease. The platform gives them the ability to synthesize the corresponding mRNA, the cellular software for producing the target protein. Moderna then combines the mRNA with one of several delivery mechanisms for getting the finished drug into the right cells in the right organs.

The power to address a huge diversity of conditions

The simplicity of the approach and the fact that proteins underlie almost all disease processes in the body opens up many categories, or modalities, of therapeutics that Moderna can pursue. One modality that the company is focusing on, and that it believes involves little biological risk of failure, is vaccines. By designing mRNA that causes the body to produce disease antigens -- proteins that are introduced into the body with viruses or other pathogens -- Moderna believes it can trigger an immune response in the same way that traditional vaccines do with deactivated viruses.

But one advantage of Moderna's platform is that it can potentially create vaccines that would be impossible to produce using conventional methods. The company is working with Merck to develop personalized cancer vaccines, which involve making a one-off medicine tailored to an individual's particular tumors. Each cancer is unique, which is why current treatments will work on some patients and not on others. Moderna plans to sequence the DNA of a patient's tumor, identify the specific mutations that have led to the cancer's origin, and create mRNA that will induce cells in the body to create proteins that mimic those mutations, triggering an immune response that attacks that specific cancer.

The ability to induce cells to produce target proteins opens up possibilities that go beyond stimulating natural immune responses. Moderna is working on mRNA to treat rare diseases, to create disease antibodies directly, and to code for therapeutic proteins such as vascular endothelial growth factor A (VEGF-A), which stimulates growth of cardiac blood vessels in heart attack victims.

A rapidly growing portfolio, but success is far off

The company's process has enabled it to create new drug candidates at a remarkably rapid rate. It has gone from zero drugs in its pipeline four years ago to 21 today, adding one about every three months. Moderna expects the pace of discovery to accelerate as it addresses new disease pathways. Since it can produce a new mRNA sequence in a matter of days, research scientists can test concepts very quickly.

However, those 21 candidates are still years away from regulatory approval. The VEGF-A medicine is in phase 2 testing, 11 others are in phase 1, and the rest are still preclinical, meaning they are not yet being tested in humans. Moderna's clinical studies are focused on identifying any safety issues and on making measurements to see whether the intended proteins are being produced in patients' cells. The big question that still hasn't been answered for any of Moderna's medicines is whether the proteins are functional. Success has been shown in animal studies, but do the drugs actually treat disease in humans? We won't know the full answer for years.

Other companies that are working on drugs that operate on RNA, such as Ionis Pharmaceuticals and Alnylam Pharmaceuticals, have taken years to learn how to get their drugs to the cells in the target organs in high enough concentrations to be therapeutic without running into toxicity issues. Moderna's drugs have shown promising results when injected into mice and primates, but the company's delivery technology is crucial for success in humans and is yet unproven.

The approval process is lengthy, and RNA-based therapies are still relatively unproven. Alnylam made history last year when it won the first FDA approval for an RNA interference drug, Onpattro, but it was a long time coming. That company started the phase 1 trial of that drug in July 2010, and it took eight years to get it across the finish line. Ionis has also run into safety issues for its RNA-based drugs, which led to a surprising rejection by the FDA last year at the end of a long development process. Further, the FDA considers mRNA medicines to be gene therapy products, and the regulatory pathway to approving such a drug is still very uncertain.

The fact that many of Moderna's drug candidates are vaccines may also lengthen the time it takes the company to win an approval. Since vaccines are injected into healthy individuals, and often into large populations of them, regulatory agencies want to make extra sure that there are no safety issues, even ones that could occur in very small numbers in a diverse population.

And finally, by the time the candidates are approved, Moderna could be facing stiff competition, not only from drugs taking different approaches but from other companies pursuing mRNA therapies themselves. Privately held CureVac has been working on mRNA drugs since the 1990s and has cancer vaccines and a rabies vaccine in phase 1 testing.

Is the potential worth the risk?

Investors flocked to DNA-editing stocks based on the huge promise for an entirely new class of therapies. Moderna is in the lead in developing yet another class of medicine that could be equally promising. But the recent history of CRISPR Therapeutics, Editas Medicine, Intellia Therapeutics, and Sangamo Therapeutics should be a warning to investors. Their share prices have been cut in half or even more as the initial excitement was replaced by disillusionment after numerous setbacks and scares hammered the stocks. Moderna's market capitalization is about $6 billion, while CRISPR sells for $1.6 billion and the other three for less than $1 billion. There's more hope built into Moderna's stock price than for all the biggest gene-editing stocks put together.

Adventurous investors may want to take a small position in Moderna if they want to get in early on what is likely to be a bumpy ride. As with gene-editing companies, the payoff could be huge, and Moderna could have enough milestones along the way to keep the stock price up if test results are positive.

But for most investors, it would be best to stay away, at least until we see clinical data that indicates these drugs actually prevent or cure diseases.