Please ensure Javascript is enabled for purposes of website accessibility
Log In Help Join The Motley Fool
Free Article Join Over 1 Million Premium Members And Get More In-Depth Stock Guidance and Research
By Keith Speights – Updated Apr 19, 2019 at 11:27AM

Amgen (AMGN 0.34%) ranks No. 1 among all biotech stocks when it comes to market cap. It's one of the most profitable biotechs and claims one of the largest cash stockpiles in the industry.

While the S&P 500 and many biotech stocks floundered in 2018, Amgen's share price jumped nearly 12%. The company beat analysts' earnings estimates in every quarter last year. But is Amgen a smart pick for investors to buy now? 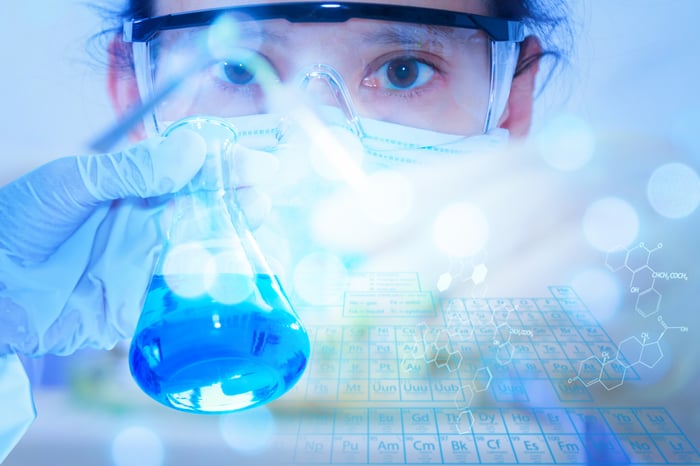 Let's first start with the good news for Amgen: The biotech has seven blockbuster drugs in its lineup that continue to generate an impressive amount of cash flow.

Even better, Amgen had one new drug and two new biosimilars that launched in 2018 and contributed solid revenue. In its fourth-quarter results, the company said that the launch of new migraine drug Aimovig is going better than expected. Sales for Aimovig totaled $119 million last year, $95 million of which was made in Q4.

Biosimilars are a key part of Amgen's growth strategy. The European launch of Amjevita -- a biosimilar to the world's best-selling drug, Humira -- appears to be going very well. Amgen has four other biosimilars in development.

Don't dwell for too long on Amgen's good news. There's plenty of bad news, too.

The worst news of all for Amgen is that sales are falling for its top-selling drug, Enbrel. Last year, the anti-inflammatory drug generated more than 22% of Amgen's total revenue. But sales are slipping due to intense competition in the market, including biosimilars to Enbrel in Europe.

That's only the beginning of Amgen's troubles. The biotech's No. 2 best seller, Neulasta, also now faces biosimilar competition. Sales are also sinking for two other current blockbusters, Aranesp and Epogen.

The competitive environment could soon get tougher for Repatha as well. Sanofi and Regeneron recently announced a major price cut for cholesterol drug Praluent that could take a toll on Repatha's market share.

Amgen's success with biosimilars has been dampened a bit by its failure to win FDA approval for Kanjinti in June 2018. The biotech resubmitted its filing for approval of the biosimilar to cancer drug Herceptin in December.

There's also some reason for concern about Amgen's late-stage pipeline. Half of the company's late-stage programs are targeting additional indications for already-approved drugs. One of the new candidates, Evenity, already failed to win FDA approval once. Another late-stage candidate, AMG520, is a BACE inhibitor targeting Alzheimer's disease. Several BACE inhibitors from other drugmakers have already flopped in clinical studies.

Is Amgen a buy?

My view is that the bad news will outweigh the good news for Amgen over the next couple of years. While I like the prospects for several of the biotech's drugs, especially Aimovig and Prolia, I don't think success for these drugs will be enough to offset the declines from older drugs like Enbrel and Neulasta.

Over the long run, Amgen could be a decent stock to own. It pays a nice dividend that currently yields north of 3%. The company could use its large cash stockpile to acquire more pipeline assets that could fuel growth in the future. Amgen also has a robust early stage pipeline that could produce big winners down the road.

For now, though, I think that Amgen will pretty much be a boring dividend stock. That's not bad, but it's not all that great for investors looking for strong growth.