Please ensure Javascript is enabled for purposes of website accessibility
Log In Help Join The Motley Fool
Free Article Join Over 1 Million Premium Members And Get More In-Depth Stock Guidance and Research
By Timothy Green – Updated Apr 14, 2019 at 8:41AM

More gains could be coming for these still-cheap stocks.

I highlighted Hanesbrands (HBI -4.50%) and Skechers (SKX -3.85%) as two beaten-down stocks to buy back in December. The timing was lucky -- both stocks and the broader market bottomed out just a few days later.

The stock market has done well since then, with the S&P 500 gaining nearly 20% from the bottom. But Hanesbrands and Skechers have each gained more than 50%. Those are impressive gains, but they're not the end of the story. Both stocks are still cheap, and both would still make great additions to your portfolio.

Check out the latest earnings call transcript for Skechers and Hanesbrands. 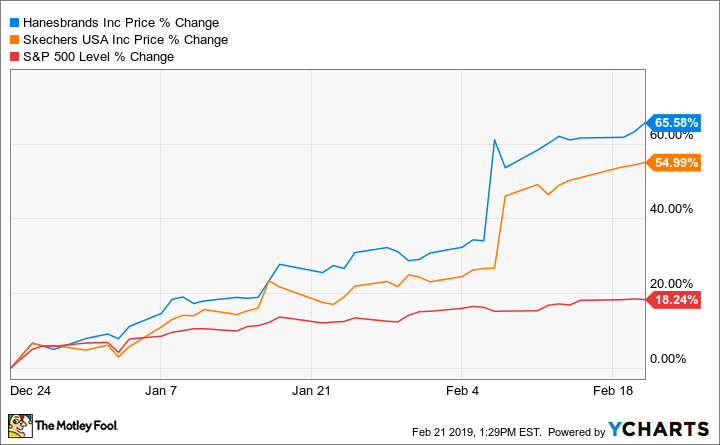 2018 wasn't a great year for Hanesbrands until the very end. Retailer Target announced it was dropping C9 by Champion, an exclusive line of activewear, from its stores in 2020. That blew a $380 million hole in Hanesbrands' annual revenue, and it threatened a key growth business for the company.

Later, the bankruptcy of Sears Holdings and a strengthening U.S. dollar led Hanesbrands to reduce its full-year outlook. The company took a $14 million bad-debt charge related to Sears, and it assumed that it would lose about 1% of its sales as the iconic retailer circled the drain.

Those two negative developments set the stage for a brutal decline when the stock market ran into trouble in December. In the six months ending when Hanesbrands stock finally bottomed out in late December, the shares lost nearly 50% of their value.

Things have quickly gotten better. Hanesbrands stock has surged, now up a whopping 66% from its low. A big chunk of that gain came after Hanesbrands reported exceptionally strong fourth-quarter results. Revenue surged 7.5% year over year, led by growth in activewear and international sales. And while adjusted earnings per share declined, they would have risen by 12% if not for a higher tax rate.

Even after the big rally of the past two months, Hanesbrands stock remains cheap. Shares trade for just 11 times the midpoint of the company's adjusted earnings guidance, and a dividend yield above 3% is icing on the cake. Hanesbrands isn't a growth company, and the loss of the Target revenue will create some challenges next year. But the pessimism that decimated the stock in 2018 was clearly overdone. Shares of Skechers were also beaten down in 2018 thanks to extreme pessimism. Since bottoming out in late December, the stock is up about 55%. A strong fourth-quarter report, featuring solid revenue growth and a big boost to per-share earnings, helped undo much of the damage of the past year. The company managed to keep costs in check, something it hasn't been able to do in recent quarters amid investments in international markets.

Skechers expects revenue growth in the first quarter to be weak, thanks to currency and the timing of the Easter holiday. But analysts are expecting solid 7.8% revenue growth for the full year, along with near-double-digit earnings growth. Based on the average analyst estimate for 2019 earnings, Skechers stock trades for about 16 times earnings.

That may not seem all that cheap, but Skechers' balance sheet is loaded with excess cash. The company had $1.07 billion in cash, cash equivalents, and investments at the end of the fourth quarter and just $97 million in debt. If the net cash is backed out, Skechers' cash-adjusted price-to-earnings ratio falls to just 13.

Skechers stock isn't as cheap as Hanesbrands. Its long-term growth prospects are likely better, given its opportunity in China and other international markets, so that makes some sense. But the stock is still trading at a discount to the market, even after surging over the past couple of months. It's not too late to buy this cheap growth stock.