Mobile payments aren't a new idea -- people have been buying items using their smartphones for at least a decade. But the broader mobile payments space encompasses more than just e-commerce sales; it includes contactless payments at stores and person-to-person payments through money-sharing apps. 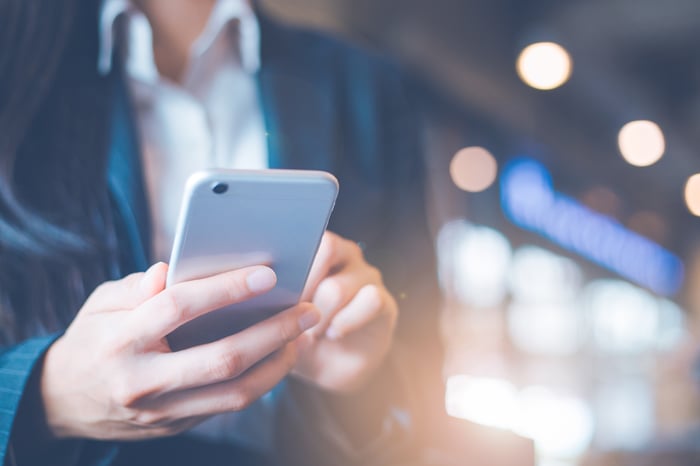 The Chinese-tech play that's spreading across the globe

Alibaba is the largest e-commerce company in China, and it has leveraged its dominance to turn Alipay into one of the most widely used mobile payment apps in the world. And the end of last quarter, Alipay had 1 billion users. That's right, 1 billion. The company's strength at home has helped Alipay spread, but its reach is growing. The app is now used in 110 countries.

To understand just how important Alipay is, investors need to know that China is the world's largest mobile payment market -- with $6 trillion in payments in Q4 2017 -- and Alipay processes just over half of the mobile transactions in the country.

Alibaba is growing more than just its mobile payment users too -- sales increased in the third quarter by 41% year over year to $17.1 billion, and earnings were up 15%.

Its share price has taken a 6% hit over the past year. But the sheer scope of Alibaba's reach in the mobile payment space demands investors' attention. E-commerce dominates its revenues, and its enormous user base means it'll likely stay at the forefront of the mobile payment business for years.

The underdog that can't be counted out

Square is best known for its platform that helps businesses of all sizes set up simple, easy-to-use point of sale terminals and mobile payment card readers. About 74% of its revenue comes from the fees it collects every time a person makes a purchase though its platform (whether they use a physical terminal or a mobile device, or pay online).

The company is increasingly looking to expand its reach through its already-popular Square Cash app, which allows users to send money to each other, similar to rival PayPal's popular person-to-person payment app, Venmo.

Square, with its $23 billion market cap, may be far smaller than Alibaba ($439 billion) or PayPal ($113 billion), but it is growing by leaps and bounds. In its most recently reported quarter, gross payment volume (GPV) -- how much money has been processed on the company's platform -- increased by 29%. Sales also popped 51% year over year, which is part of the reason why Square's share price is up nearly 40% in 2019.

Square's platform, services, and apps are easy to use for businesses and for the average smartphone user looking to split a bill with a friend. Creating an easy way for mobile users to pay for things is what's driving Square's success. If you like scrappy underdogs that have their eye on unseating dominant players then Square is your stock.

The dominant U.S. player with more room to run

PayPal has spent years building its dominance in its corner of the payments space, and what's impressive is how fast it's still growing. The company's total payment volume was up 23% in the fourth quarter, and its net new accounts grew by 13.8 million. In short, the company continues to add new customers at a healthy clip, and those customers are using PayPal more than ever before.

When it comes to mobile payment processing, it's hard to beat PayPal's figures. Mobile transactions accounted for 41% of PayPal's total payment volume in Q4.

Additionally, PayPal is leading the move to a cashless society through its wildly popular P2P Venmo app. Venmo payment volume grew 80% in the fourth quarter, and 29% of its users now monetize the app. The company started charging fees through Venmo just last year, so revenues from the app only make up 1% of the company's total. But investors can expect that to grow significantly as the company moves further along the path of monetizing Venmo.

PayPal's stock price has jumped about 20% over the past year. That doesn't match Square's recent pop, but the company has such a strong lead in the mobile payment space that there's little reason to fear its dominance will end anytime soon.

With merchants continually making it easier to buy goods and services online and via smartphones, investors should expect the importance of mobile payment platforms to grow. The companies detailed above are leading the charge toward a cashless society, and their investments in new technology and apps will likely pay off for them -- and their investors -- very soon.