Alphabet's (GOOG 3.13%) (GOOGL 3.04%) Google and Amazon (AMZN 4.50%) have been locked in a battle for smart-speaker dominance. But there's new evidence that Google Assistant and Alexa -- the companies' respective voice assistants -- will soon have a much larger territory to compete over.

A recent Juniper Research report says that by 2023 there will be 8 billion devices with voice assistants in them, up from 2.5 billion at the end of 2018, and that a massive $80 billion "voice commerce" market will grow out of this trend. This new voice commerce market will consist of sales made through a voice assistant, including physical goods and digital sales, but will mainly comprise digital goods (such as apps and digital content). 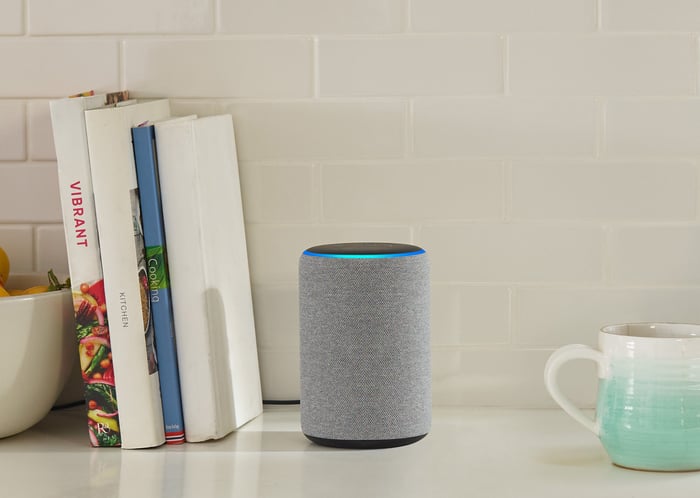 But the Juniper data suggests that these two companies may be fighting to expand their voice assistants in a new market as well -- smart TVs. Over the next five years, smart TVs with voice assistants are expected to have a compound annual growth rate of 121.3%, compared to 41.3% for smart speakers.

Smart TVs are expected to drive sales in the voice commerce market because they provide a "visual context that is lacking in smart speakers," according to Juniper's James Moar.

Just this month, Samsung said that it would add support for Alexa and Google Assistant to its latest smart TVs (though its own proprietary assistant, Bixby, will handle some of the TV voice commands). It was a significant announcement, considering that Samsung is the largest television manufacturer in the world. Other TV manufacturers, including LG Electronics, Sony, and Vizio, have made similar moves.

While these are just modest voice-assistant integrations right now, it likely won't be long before most new TVs allow some pairing with Alexa and Google Assistant.

And as more companies add Google's and Amazon's voice assistants to their devices, it's going to lock these two companies in a battle over the voice commerce market.

Check out the latest Amazon and Alphabet earnings call transcripts.

Amazon may already be pulling ahead

The voice commerce market will allow users to easily search and buy items from their smart TVs, particularly digital content, and the data shows that Amazon may already be taking the lead.

Talking about the smart-TV, smart-speaker, and wearable-tech segments, the Juniper research noted that: "In these categories, Amazon's Alexa has already established itself as the leader[,] setting the pace for the market."

The value of having Alexa installed in devices comes not only from the sales it can generate from Amazon's platform -- like ordering more toothpaste right when a user thinks about it -- but also from collecting the vast amount of data generated from user voice searches. Amazon's growing advertising business could use that information to make even better ad placements on its site, to drive sales.

Of course, it's still early in this race to call a winner, but with Amazon far more open to allowing Alexa to be integrated directly into third-party devices -- including smart speakers, in-car navigation devices, smart lamps, and thermostats -- it's clear the company has an advantage that could pay off as this $80 billion voice commerce market takes shape.