While Ford Motor Company (NYSE:F) is still easily profitable, is more financially stable than a decade ago, and has cash and liquidity levels above targets, there's no question 2018 was a challenging year. For the full year, Ford's $7 billion adjusted pre-tax profit, adjusted earnings per share, and adjusted operating cash flow were all down compared to the prior year. And it's salt in the wound that over the past three years General Motors' (NYSE:GM) stock is up 37% while Ford's is down 28%.

One quick glance at Ford's fourth-quarter and full-year results and you can quickly pinpoint the problem areas: This is where Ford is failing. 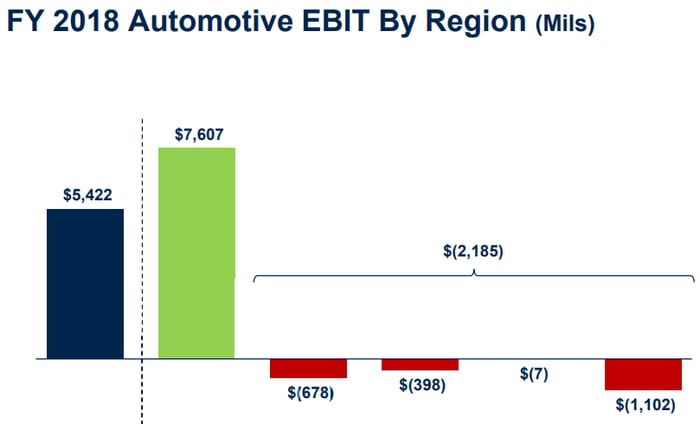 Let's break down the three most troubling overseas regions, in no particular order, and highlight the problems and what Ford believes are solutions.

General Motors waved the white flag and sold its European operations after decades of headaches and tens of billions of dollars in losses, but Ford has opted to stick it out for now. After Ford seemingly turned the corner in Europe, reporting a $367 million pre-tax profit in Europe during 2017, its luck reversed to a $398 million loss during 2018. Part of Ford's strategy to sell more SUVs and premium trims worked, as its net pricing was a $916 million tailwind for the company's earnings. In fact, Ford's SUV sales increased 19.3% in Europe last year, thanks to the Kuga (Escape) and EcoSport recording their best years ever. Unfortunately, Ford's pricing tailwind, thanks to increased SUV sales, was more than offset by net product and commodities costs, as well as an unfavorable exchange rate. 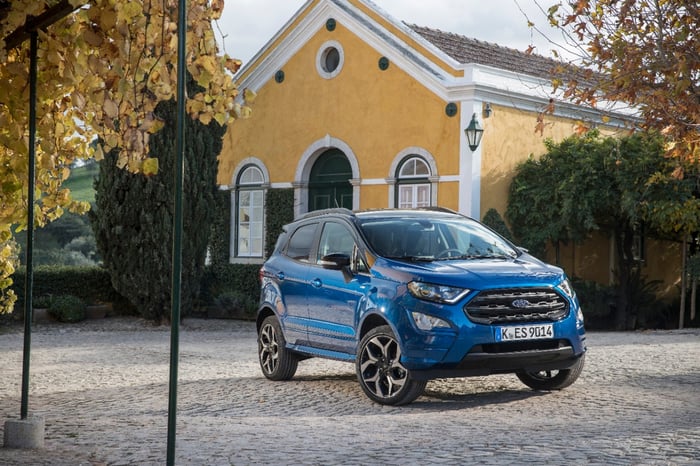 So what's Ford to do in Europe? Its current struggles are forcing the company back to the drawing board. Ford is already doing a lot of things right in Europe: It's the No. 1 commercial vehicle brand (think large business/company vans), it's selling a more profitable SUV-to-passenger-car mix, and has increased sales of its high-end trims/models. But more is required, including an announcement that its Russia business was under strategic review, which could mean selling its operations. A further part of Ford's solution is also to reduce passenger vehicle complexity, prioritize higher-margin markets, reduce personnel and structural costs, and improve or eliminate unprofitable products.

Despite making progress with the previously mentioned solutions, Ford remains the UK's No. 1 brand, and complications with Brexit and currency exchange have deeply affected the company's earnings and left management's forward guidance nonexistent. Investors will want to stay tuned to Ford's restructuring plans when they surface, because one solution could be for it to follow its crosstown rival out of the region.

One of the biggest problem areas is somewhat hidden in Ford's pre-tax graphic, because China is included in the Asia-Pacific region. Here's a stunning figure to digest: Ford generated $152 million pre-tax profit in China during 2017, which plummeted to a loss of $1.54 billion in 2018. Excluding China, Ford would have generated a $444 million pre-tax profit last year in the Asia-Pacific region, compared to the prior year. On the bright side for investors, Ford's troubles in China are largely self-inflicted and can be fixed, compared to its troubles in Europe, where its currency headwinds are mostly out of its control.

"China is absolutely essential to Ford globally. The management team fully understands the urgency and importance of transforming our business in China," said Anning Chen, Ford China president and CEO, in a press release. "We need to build a robust management team and efficient organizational structure."

Ford's problems in China are simple: Its vehicle portfolio aged and it became less competitive. Chen took over Ford's Asian operations in October 2018, and has doubled down on refreshing its lineup and improving operations. Ford now plans to launch more than 50 new products in China by 2025, spearheaded by the all-new Focus and new Escort already making it to dealerships. It's also worth noting that help is on the way sooner rather than later, with 10 new product launches in China this year alone.

Essentially, Ford's solution to turn around its business in China will be to launch a slew of new vehicles to help boost transaction prices and to focus on more SUVs -- of the 50 new products scheduled to launch by 2025, eight will be all-new SUVs -- to help drive profitability. In addition to refreshing its portfolio and adding new SUVs, Ford will increase local production and add five vehicles to its Chinese production operations, helping trim costs associated with import tariffs.

Ford announced recently it would exit the heavy truck business in South America, a move it believes to be a milestone in its global redesign. More specifically, Ford will cease production at the São Bernardo do Campo plant in Brazil this year, which will shut down sales of the Cargo lineup (the F-4000 and F-350), as well as the Fiesta small car. Ford will record a pre-tax special item charge of $460 million as a result of the move, but it will help Ford redesign a more sustainable and profitable business in South America. In addition to those production cuts, Ford has reduced salaried and administrative costs in the region by more than 20% over the past few months, while strengthening its portfolio with more SUVs and pickups.

Another solution Ford is working on is a global alliance with Volkswagen. Due to overseas economic uncertainty, Ford and Volkswagen plan to team up and develop commercial vans and medium-size pickups as soon as 2022. The hope is to drive meaningful scale and efficiencies as both companies share investments in vehicle architecture and technologies. It's moves such as making a global alliance with Volkswagen and exiting vehicle segments that have little potential for profit that will help Ford turn things around.

It's clear from the figures and results discussed above that Ford is failing overseas. It has detailed plans to refresh its portfolio in China and produce more vehicles locally to help revive sales and improve costs. It has plans to rethink where and how it does business in Europe, while improving its sales mix to focus on more profitable vehicles. And it's exiting vehicle segments in South America that are no longer promising. Ford faces a number of challenges, many of them overseas, and only time will tell if these moves will deliver a business turnaround for investors. But if we've learned anything from the past recession, it's that Ford is certainly capable of turning things around in the face of numerous headwinds and doubters.