Investors were more than willing to snap up shares of Viking Therapeutics (NASDAQ:VKTX) last September after the company reported overwhelmingly positive results from a mid-stage liver disease drug trial, with shares jumping 87% in a single day. Since then, the stock has given up those gains and then some, selling for 18% less than it was the day before the positive results were announced, despite the lack of any new information about the drug's safety or effectiveness. Is this a buying opportunity for Viking stock?

Last year's clinical trial was a phase 2 study of VK2809, an orally available thyroid beta receptor agonist that is selective for liver tissue. By activating thyroid receptors in the liver, VK2809 lowers liver fat content and blood levels of LDL-C, the "bad" cholesterol. The trial was a study of 45 people with non-alcoholic fatty liver disease (NAFLD) and elevated cholesterol, who either took the drug or a placebo for 12 weeks.

Results were overwhelmingly positive. Among the patients taking the drug every other day, 77% experienced a reduction of liver fat by 30% or more, and 91% of those on a daily dose had the same result. The patients had statistically significant reductions in LDL-C of at least 20%, as well as reduced levels of other molecules associated with heart disease, including apolipoprotein B and lipoprotein (a). No safety issues were uncovered in the trial. 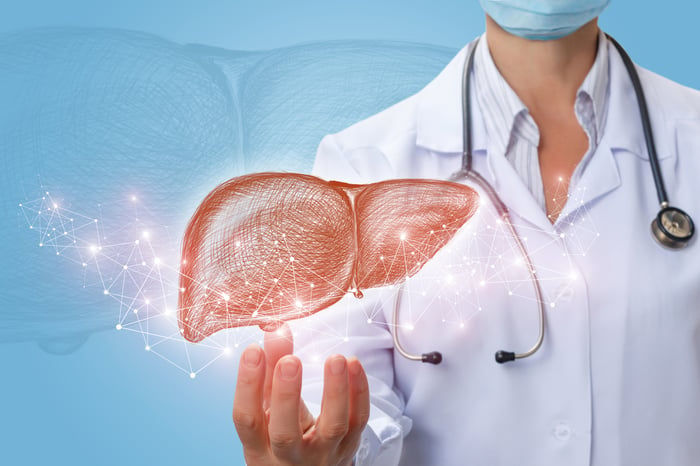 Going after the big prize: A NASH treatment

NAFLD is a "silent" disease that usually goes unnoticed in those who have it -- between 10% and 24% of all Americans -- but it's a precursor to non-alcoholic steatohepatitis (NASH), a potentially deadly form that Viking also wants to target with VK2809.

A host of other pharmaceutical companies are developing treatments for NASH, hoping to win a share of what could be a $35 billion market. Animal studies in 2017 showed that VK2809 could be effective in reducing liver fibrosis, or scarring, meaning that the drug could have three mechanisms to attack the disease: Reduction of fibrosis, liver fat, and blood lipids.

But last year's trial did not specifically test VK2809 against NASH, so Viking has plenty of work to do before the drug could be approved for that indication. The company's next step will be to file an investigational new drug application (IND) with the FDA and enroll patients with NASH in a new phase 2 trial that will use liver biopsies to measure the effect of the drug on the disease. It is expected that the company will file the IND around mid-year, and it could begin enrolling patients in the trial before the end of 2019.

So why are investors apparently ignoring news that was good enough to almost double the stock price to $19 in a single day last fall? No one knows for sure, but I think there are at least three reasons.

First, the market has been tough on biotech in general and NASH stocks in particular lately. According to business intelligence firm Informa, there were at least 48 NASH drugs in clinical tests last year, with 30 of those in phase 2 trials, and four in phase 3. With so many competitors in the running, investors are still trying to sort out the more-likely winners from the losers. Just last week, Intercept Pharmaceuticals (NASDAQ:ICPT) announced a successful phase 3 trial of its NASH drug, Ocaliva, and shares initially spiked. But then, they fell well below pre-announcement levels as investors pondered the implications of a troubling side effect and the fact that the drug failed to achieve one of the trial endpoints. Madrigal Pharmaceuticals (NASDAQ:MDGL) had a similar story, with the stock soaring on positive results from a NASH trial last year, only to give up those gains. And just to illustrate how difficult it is to handicap this race, Gilead Sciences (NASDAQ:GILD) reported a failure of a phase 3 trial of its NASH drug earlier this month.

Second, Viking's trial success also revealed one of its weaknesses. The company knew for months that the VK2809 trial would be reading out in the fall, and that its next step would be to file an IND to prepare for a NASH trial. So why wasn't the company ready to do that right away, rather than waiting six months or more? It turns out that the company can't file that IND until it has data from some animal toxicity studies. Analysts on the third-quarter conference call in November asked why those studies weren't done earlier. CEO Brian Lian answered that the company couldn't afford it, noting that the company has "always been somewhat capital constrained."

The constraints that Viking has on its resources have manifested themselves in another way. The company announced it will be suspending further clinical work on the other indication it was pursuing for the drug, the rare disease glycogen storage disease type Ia (GSD Ia). Viking believes that the focus required to get VK2809 to an FDA approval for NASH won't allow it to pursue GSD Ia now. That is the right priority, but also illustrates the company's limitations.

Indeed, immediately after the trial results, Viking took the opportunity afforded by the soaring share price to issue a secondary offering to raise $176 million. It was a shrewd move, especially considering where the stock price has gone since, but it diluted the share count by 16%, and while the company expects its cash to last through 2020, that won't be enough to get VK2809 across the finish line.

Finally, that one-day 87% move in the share price in September was overblown. Viking's stock had already run up 156% since the beginning of 2018, partly in anticipation of those trial results. The data were better than expected, for sure, but the jump was likely amplified for another reason. Viking is one of the most heavily shorted stocks in biotech, with about 40% of its float being shares borrowed by short sellers who are betting against the stock. The positive news left some of those short sellers scrambling to buy shares, creating a temporary boost to the stock price that had nothing to do with the company's real value.

The case for Viking

Viking's value is certainly higher than it was before the VK2809 trial, despite the market's mood swings. Commercial success for the drug may still be years away, but the risk that it won't eventually pay off has diminished. The drug candidate that rival Madrigal is working on is also a thyroid beta receptor agonist, so its successful phase 2 trial of MGL-3196 is more evidence that Viking's approach is going to work. Although direct comparison of clinical trials is never completely valid, the degree of liver fat reduction achieved by VK2809 was greater than that of Madrigal's drug, so Viking is at least in the running to have a superior treatment.

Madrigal's market capitalization, with only that one drug in clinical trials, is $2 billion compared with Viking's $600 million. And Viking has more in its pipeline than VK2809. Its most advanced candidate is VK5211, a selective androgen receptor modulator that is designed to treat the loss of bone and muscle mass typically experienced by patients who have suffered a hip fracture. A phase 2 trial of the drug met the primary endpoint of increased lean body mass while reducing mean fat mass after 12 weeks. The company believes the market opportunity for the drug is over $1 billion, but it will have to find a partner to complete the testing and bring it to market. The company also plans to start a proof-of-concept study this year on VK0214, another thyroid receptor agonist for the treatment of a rare disease called X-Linked adrenoleukodystrophy that currently has no approved therapy.

Viking probably needs to team up with bigger partners to unleash the value of its pipeline. Management has repeatedly said during conference calls that it's interested in doing so to further development of either VK2809 or VK5211. Any announcement of a partner for these drugs, especially for the NASH indication, should be a major catalyst for the stock price.

With biotech deal-making beginning to heat up in 2019, though, the best opportunity for Viking may be an acquisition offer. Viking's market cap would make it a reasonable purchase for a major company aiming to build prospects in the obesity-related field of liver disease. There are several potential buyers, but an obvious one would be Gilead. Growth through acquisition is that company's No. 1 priority, and the failure of its NASH candidate leaves a hole in its strategy that Viking could fill. Indeed, Viking shares rose on the news of the Gilead trial.

Viking stock is a good buy at this price for investors who are willing to take substantial risk, and who are able to be patient. No drug currently in mid-stage testing is a sure thing, and even if approved, there's no certainty of commercial success. However, the data for the company's NASH drug is a strong indicator of value that could eventually be realized in the stock price. If a company like Gilead is going to snap it up, that could happen sooner rather than later.