Despite the stock market's rise, these five stocks still look attractive to our contributors.

We're two months into 2019, and the stock market has changed quite a bit since the start of the year. The panic and volatility of late 2018 is well in the rearview mirror, and the market has rebounded (and calmed down) nicely. 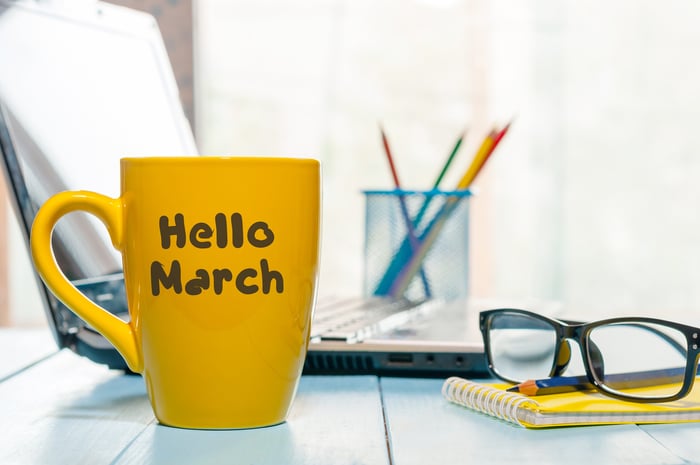 Major growth catalysts at a discount

Matt Frankel, CFP (Goldman Sachs): As we head into March, Goldman Sachs still looks like one of the best values in banking, if not in the entire stock market.

Thanks to its yet-unresolved "1MDB" bond-fund scandal, Goldman trades for approximately 5% less than its book value. This is especially remarkable considering the bank shattered analyst expectations in the fourth quarter, generating a 12.1% return on equity (10% is the industry benchmark).

One of the catalysts fueling Goldman's strong performance has been its young but rapidly expanding consumer-banking division, which includes the highly successful Marcus platform for personal loans and high-yield savings accounts. In fact, Goldman's revenue from "debt securities and loans" grew by 43% in 2018, and the Marcus growth was a big reason for this.

Goldman plans to gradually expand its consumer offerings. A wealth-management product for everyday Americans was announced in late 2018 and could leverage Goldman's brand power to capture a market it has historically not served. Furthermore, Goldman Sachs is reportedly partnering with Apple on an upcoming co-branded credit card product. Details are limited right now, but it's fair to say that this has the ability to take Goldman's credit card business from zero to billions in a relatively short amount of time if it's successful.

The bottom line is that Goldman simply has too much going for it to trade so cheaply. The 1MDB scandal could continue to weigh on the stock for the time being, but I'm confident that patient investors could be handsomely rewarded.

Vertex Pharmaceuticals has carved out a multibillion-dollar niche treating cystic fibrosis, a life-shortening disease with limited treatment options. It revolutionized treatment when it launched Kalydeco in 2012, did so again when it rolled out Orkambi in 2015, and most recently with Symdeko in 2018. Increasingly more cystic fibrosis patients with different mutations have become eligible for treatment as these therapies have launched. As a result, Vertex Pharmaceuticals' revenue has catapulted higher -- for instance, its sales increased 40%, to $3 billion in 2018.

Currently, its drugs can only help about half of cystic fibrosis patients. However, it has two distinct triple-drug therapies in development that could allow it to treat up to 90% of patients.

The company already reported positive results from one of the two triple-regimen therapies in 2018. Soon, it will report data from the second one. If data from the second one is better than the first one, it will be filed for Food and Drug Administration (FDA) approval in the second quarter. If not, then the first is the one that will be filed for approval. Either way, Vertex appears on the cusp of significantly increasing its target market.

That has management saying that Vertex Pharmaceuticals "has the potential for significant revenue and earnings growth through the mid-2020s, based solely on treating more patients with our approved and future CF medicines." Given the near-term data and expected FDA filing in Q2, Vertex Pharmaceuticals is a top stock to target in March.

Explosive gains may not be over

Tim Green (Hanesbrands): A brutal December sell-off sent investors fleeing from apparel manufacturer Hanesbrands, but those who've stuck around have enjoyed market-destroying gains in the past two months. Shares of Hanesbrands have soared roughly 64% since Dec. 24, more than tripling the performance of the S&P 500.

Despite that rally, Hanesbrands stock is still around 50% below its multiyear high reached in 2015. The company's core innerwear business has been suffering from sales declines, and overall growth has been sluggish. Last year, the loss of an exclusive deal with Target and the bankruptcy of Sears Holdings added to the pessimism surrounding the stock.

But Hanesbrands showed signs of life in the fourth quarter. Revenue rose 7.5% year over year, driven by double-digit growth in activewear and international sales. The bottom line declined, but a higher tax rate was solely to blame. Excluding the higher tax rate, Hanesbrands' non-GAAP earnings per share would have jumped by 12%. The company's guidance was also solid, calling for revenue growth in 2019.

What makes Hanesbrands a top stock this month is its valuation. The stock is much more expensive than it was two months ago, but it's still shockingly cheap. Based on the company's non-GAAP earnings guidance, shares trade for less than 11 times earnings. Throw in a dividend yield above 3% and you have the perfect stock for value and dividend investors alike.

A tech leader with plenty of great ideas

Chris Neiger (Alphabet): Alphabet is one of the most dominant technology companies in the world and the leading U.S. digital-ad company by sales revenue. But aside from those two reasons, Alphabet deserves to be on this list because it's a massive incubator of innovation.

Consider just two of Alphabet's ongoing tech projects: autonomous vehicles (AVs) and the company's Google Assistant. Its Waymo subsidiary has already racked up more than 10 million miles of autonomous driving and 7 billion virtual miles of driving (through its software), giving it more hands-on autonomous-driving experience than any other U.S. company. Waymo took that experience and launched the first-ever commercial autonomous ride-hailing service at the end of 2018, and with the AV market expected to grow over the coming decades, some analysts think Waymo already has a valuation north of $100 billion.

Of course, Alphabet is pursuing other areas of growth besides autonomous cars. The company is looking to tap into the growing $80 billion "voice commerce" market with its digital assistant, Google Assistant. By 2023, it's expected that there will be 8 billion devices with voice assistants, a substantial increase from 2.5 billion devices at the end of last year. Google is adding its assistant into more products outside of its own branded devices, allowing the company to collect more information on what users are searching for -- which will eventually be used to sell more digital ads.

Don't forget the company's growing cloud-computing business, either. Google more than doubled the amount of its cloud-platform deals worth more than $1 million last year and it continues to make the segment a top priority. With so many promising irons for Alphabet in the fire, investors are running out of excuses not to buy the company's stock.

A bargain price on a fintech leader

Brian Feroldi (Broadridge Financial Solutions): Every publicly traded company needs to meet certain requirements in order to comply with regulators. Documents such as proxies, prospectuses, annual reports, trade confirmations, and account statements all need to be tracked and reported on a regular basis. But how do companies keep up with all of this information and ensure that it gets to the right place at the right time? A simple answer is to hire Broadridge Financial Solutions.

Broadridge is the dominant provider of investor governance, communication, and clearing services. The company holds a commanding market share of 80% in the United States and more than 50% worldwide. Each day, it clears and settles over $5 trillion worth of transactions.

A highly attractive feature of Broadridge's business model is that a large portion of its revenue is recurring in nature. It's also recession resistant, which makes sense because companies need help with communications, governance, and clearing services in all market conditions. This fact makes Broadridge's financial statements highly predictable.

Broadridge has a history of using its dominant market position to steadily raise prices and roll out new services over time. This helps to create a growing stream of cash flow that management uses to reward investors. The company pays out a growing dividend, regularly buys back stock, and makes occasional acquisitions to further cement its leadership position. This simple formula has led to steady performance for years.

Market watchers predict that price increases, margin improvements, and acquisitions will allow Broadridge to post profit growth of roughly 10% annually over the next five years. That's quite strong for a rock-solid business that's currently trading for less than 20 times forward earnings and offers up a dividend yield of 2%.