Shares of Antero Resources (AR 0.34%) sold off in February, declining 15.2% for the month, according to data provided by S&P Global Market Intelligence. That sell-off continued the downward spiral of the natural gas producer's stock, which plummeted 50% last year.

Antero's sell-off last month was a bit of a head-scratcher. For starters, oil prices ended the month up more than 6%, which will benefit Antero's industry-leading natural gas liquids (NGL) business since those prices tend to rise lock-step with crude. Meanwhile, natural gas ended the month less than 1% lower, which wouldn't have impacted Antero either way since it has already locked in the price for 100% of its anticipated gas production this year.

Check out the latest earnings call transcript for Antero Resources. 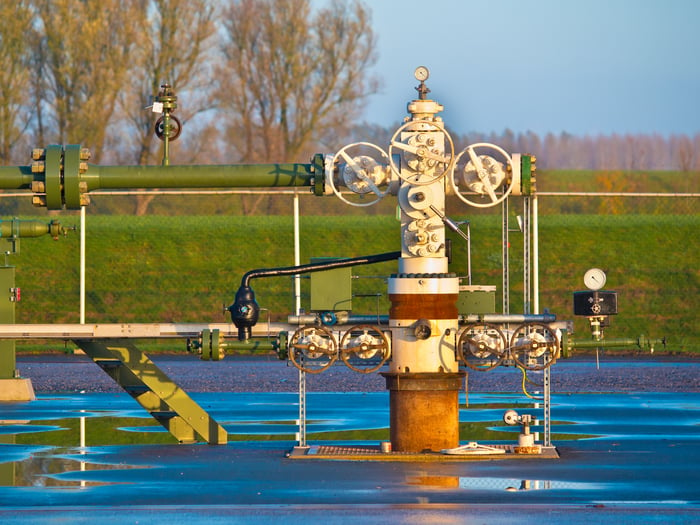 Meanwhile, Antero reported surprisingly impressive fourth-quarter results last month. Not only did it produce at a record level during the quarter, it also beat the consensus earnings estimate by $0.03 per share. Further, the company said that it now expects 2019 capital spending to come in toward the low end of its guidance range, or about 20% below 2018's level.

Instead, what seems to be weighing on the share price is that investors don't appear to be all that thrilled with the company's long-term strategy. Antero noted that at $50 oil and $2.85 natural gas, it could generate just enough cash flow to grow its production at a 10% compound annual growth rate through 2023 while maintaining a less than 2.0 times leverage ratio. Meanwhile, at $65 oil and $3.15 natural gas, it could grow at a 15% CAGR while producing $2.5 billion to $3 billion in free cash and pushing leverage to less than 1.0 times. Investors seem concerned that the company won't generate any free cash at $50 oil, a level at which a growing number of rivals can produce a boatload of excess money.

Antero Resources has been working at addressing the concerns of investors, which have been weighing on its stock price. However, those investors still don't like the company's plans to plow nearly all of its cash flow into drilling more wells when a growing number of peers are aiming to live well below their means so they can send more money back to shareholders. While Antero did authorize a $600 million share buyback, investors seem to want much more given how far the company's stock has fallen in the past year.