Antero Resources (NYSE:AR) recently put the wraps on a solid year as it grew production at a fast pace while also improving its financial position so that it could start returning cash to shareholders. The natural gas driller ended on a high note as production hit a record in the fourth quarter, which enabled it to beat analysts' earnings expectations. It was an impressive quarter by several measures, though three numbers stood out as ones that investors won't want to miss.

Antero Resources delivered a gusher of production to end the year. Output topped the 3 billion cubic feet equivalent per day (Bcfe/d) mark for the quarter, which was a record for the company. Overall, production surged 18% sequentially and 37% year over year. Driving the company's growth were several notable wells, including a 10-well pad in the Marcellus shale that produced an average rate of 195 million cubic feet equivalent per day (MMcfe/d) during its first two months online.

For the full year, Antero's production averaged 2,709 MMcfe/d, which was 20% higher than 2017's average. Roughly 72% of the company's output was natural gas, making Antero the fifth-largest gas producer in the country last year. 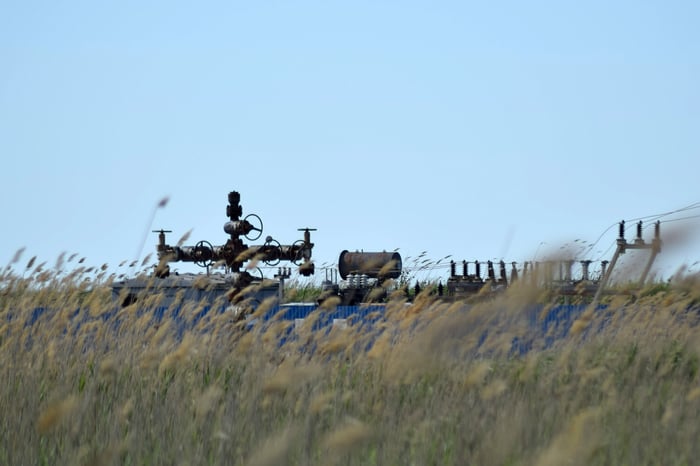 An even bigger story for Antero Resources during the quarter was its liquids output, which includes both oil and natural gas liquids (NGLs). The company produced an average of 162,077 barrels per day for the quarter, which was up 51% compared with the prior-year period. Not only did the company pump more oil, but it was able to recover higher quantities of ethane thanks in part to improved pricing and the increased availability of infrastructure, which made extracting that NGL more profitable.

Antero Resources ended last year as the largest NGL producer in the country thanks to its position in the liquids-rich parts of the Marcellus shale. One factor that helped drive the growth of its NGL business last year was the start-up of new infrastructure to support its production. One of those notable developments came from pipeline giant Energy Transfer (NYSE:ET), which finished work on its Mariner East 2 pipeline during the fourth quarter. That system is allowing Antero Resources to move nearly half of its propane and butane production to export markets where the company has been able to capture stronger "pricing than we have received over the last several years," according to CEO Paul Rady. In addition to that pipeline, the company also noted that it started exporting ethane shipped through Energy Transfer's Mariner East 1 pipeline during the quarter.

While Antero Resources has grown into one of the largest gas and NGL producers in the country over the past few years, the company's stock price hasn't followed production higher. Because of that -- and weaker oil prices over the past few months, which impacts NGL values -- the company plans to spend less money drilling new wells next year. As things stand, Antero sees capital spending coming in at the low end of its guidance range for 2019, or about 20% below 2018's level. That will enable it to keep capital spending well within cash flow.

That reduced spending plan will also allow the company to generate more free cash flow in 2019 if oil and NGL prices improve, which it intends on returning to investors through its share repurchase program. The company currently plans to buy back $600 million in stock over the coming quarters. It already repurchased $129 million during the fourth quarter -- roughly 3% of shares outstanding -- and should be able to buy back another $300 million in March after closing the simplification transaction between its midstream companies Antero Midstream and Antero Midstream GP. Those repurchases should help the company achieve its aim of "deliver[ing] superior returns to shareholders over the long term," according to Rady.

While Antero Resources delivered strong production growth once again during the fourth quarter, that high-octane expansion didn't create any value for investors since shares of the natural gas company plummeted last year. That's why the company is pivoting away from growing as fast as it can and instead aiming to generate excess cash, which it intends on returning to shareholders through its stock repurchase program. The hope is that these buybacks will enable Antero to start growing its share price at a high-octane rate going forward.