Volkswagen AG (OTC:VWAGY) took the wraps off its latest retro-inspired electric-vehicle concept on Tuesday. The I.D. Buggy Concept is a battery-powered riff on the Meyers Manx, an endearing and iconic Volkswagen-powered dune buggy first introduced in the 1960s.

Why would VW do a show car based on another company's product? Because it wants to do something similar now: At the same time it revealed the I.D. Buggy, VW also announced that it has signed a deal with a German start-up that plans to build its own vehicle on VW's electric-vehicle platform -- and that it's inviting others to inquire. 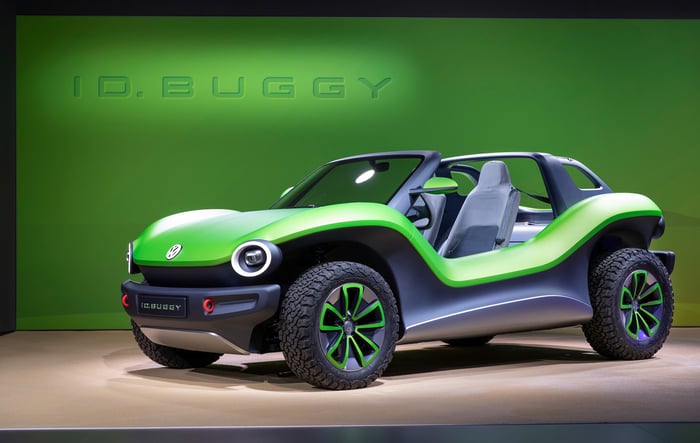 What it is: An all-wheel-drive electric dune bug

Simply put, the I.D. Buggy Concept is a dual-motor all-wheel-drive electric dune buggy powered by a 62 kilowatt-hour battery pack integrated into the floor. VW said it will accelerate from 0 to 100 kilometers per hour (62 miles per hour) in 7.2 seconds, and that it has a range of about 250 kilometers (155 miles) on the European test cycle.

Will VW go ahead and build it, alongside the similarly retro I.D. Buzz that captured the public's imagination in 2017? Probably not -- but if you want one, don't despair.

Show cars can serve lots of purposes for automakers beyond previewing future models. With the I.D. Buggy, VW is using its storied history to encourage small manufacturers to consider using its electric-vehicle platform to underpin their own creations, just as California start-up B.F. Meyers & Company (among others) did with the original Beetle's chassis and engines back in the day.

VW said the I.D. Buggy is meant as "a clear signal to small series manufacturers and start-ups ... you can build the new-era, zero-emissions dune buggy based on this concept."

Why it's important: VW wants to lower the cost of its electric vehicles

Of course, those small manufacturers don't have to build dune buggies. Volkswagen has said it will share its mass-market electric-vehicle platform, called MEB, with other automakers, to help bring down the costs of its transition to zero-emissions technology by boosting economies of scale. On Tuesday, we learned that VW has already signed such a deal with one small automaker.

VW said that e.GO Mobile AG, a start-up based in Aachen, Germany, has signed on to be the first external partner to use the MEB platform to underpin its own vehicles. e.GO Mobile plans to put its first electric vehicle, a small city car called the Life, into production later this year. 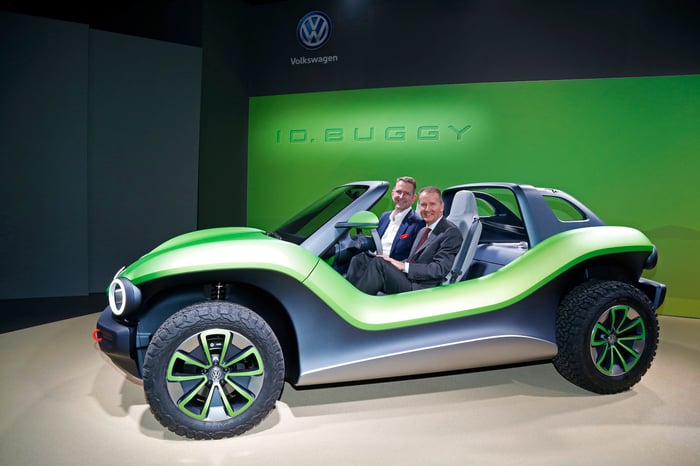 VW would like to have many more deals like that. It's not impossible that one or more of the automakers that sign on to use MEB to underpin their own electric vehicles will turn out to be global giants. VW is known to have discussed such a deal with Ford Motor Company, and it might have had talks with others.

But in the meantime, it's reaching out to smaller potential partners, companies like e.GO Mobile that could use MEB to profitably produce niche vehicles on a small scale. Think of the I.D. Buggy as a rolling advertisement to those kinds of companies.