Honda (NYSE:HMC) showed off its upcoming electric city car in Geneva on Tuesday. The Honda E Prototype is a close preview of the production version of the adorable Urban EV Concept the company showed in 2017. It'll begin shipping in Europe later this year.

Honda also said that it wants 100% of the vehicles it sells in Europe to be "electrified" models by 2025. Here's what we know, and what we don't, about this little electric Honda. 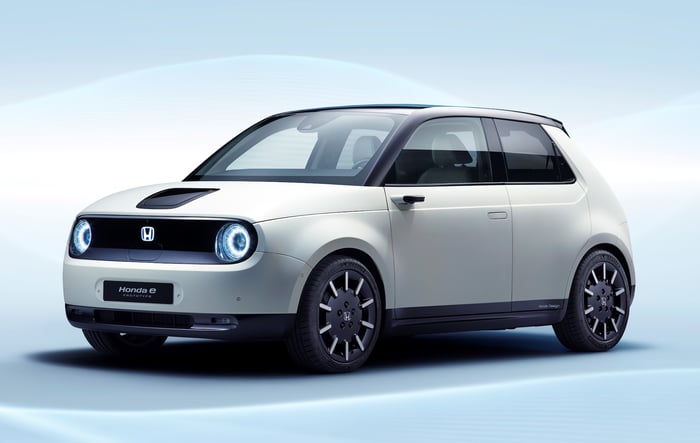 Honda's E Prototype is a preview of a battery-electric city car that will launch later this year. Image source: Honda Motor.

The Honda E Prototype: What we know

We should be clear about something up front: Honda's E Prototype is not a Tesla (NASDAQ:TSLA) rival. Too often, discussions of new and upcoming electric vehicles get bogged down in comparisons to Tesla that aren't appropriate. (As hard as it might be for some Tesla fans to believe, not everyone wants an expensive luxury-performance vehicle from a young automaker that often seems to be improvising on the fly).

More to the point, this little Honda is designed for a market segment that Tesla doesn't cover. It's a small urban runabout. It's easy to park, affordable to own, and fun to drive, with a dash of engaging style.

Often, show cars don't translate well to production, but Honda has managed to preserve the essence of the almost-too-cute Urban EV Concept in the E Prototype. Like the Concept, the E Prototype draws inspiration from the fondly remembered Honda Civics of the 1970s, but the basic shape has been updated (and enlarged) to meet the needs of modern urban drivers.

It's built on an all-new electric-only architecture that Honda designed with urban environments in mind. The architecture allows for compact proportions, with a long wheelbase and short "overhangs" (the bits of the car that jut out ahead of the front wheels and behind the rear wheels) that make it easy to maneuver and park -- and that should help give it nimble handling characteristics as well. 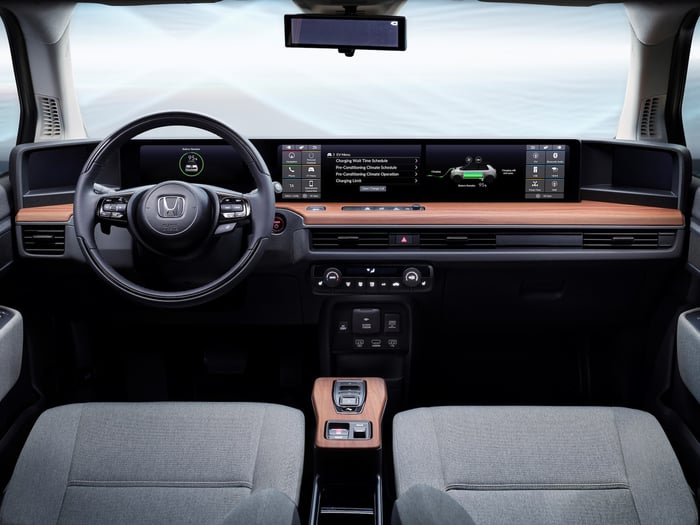 Honda went for touchscreens in the E Prototype, but the details are traditional Honda -- elegant and functional. Image source: Honda Motor.

We don't yet have details on the battery that will be offered in the production version. But we do know that it's a single-motor, rear-wheel-drive design, with the battery pack built into the car's floor. Honda promises "over 200 kilometers" (about 124 miles) of range and the ability to recharge 80% capacity in 30 minutes. That's not a lot of range if your frame of reference is Tesla, of course, but -- depending on the price point -- it may be plenty for many European city dwellers.

We know that production will begin later this year, but there's one other thing we don't know yet: where Honda will sell the production model. We know it'll be offered in Europe, but as of now at least, Honda doesn't seem to have plans to sell it in the United States.

Why it's important to Honda

While Honda was one of the first automakers to offer a hybrid, it's somewhat late to the battery-electric vehicle party. When CEO Takahiro Hachigo decided to accelerate Honda's push into the battery-powered space, it was clear that the company's technology lagged some rivals'. That led to some puzzling business decisions, including the decision to release the battery-electric Clarity Electric sedan with just 89 miles of range in the United States.

Hachigo has forged some partnerships -- notably with General Motors (NYSE:GM) -- that should help Honda make up the lost ground on electric vehicles (and autonomous driving) in time. But right now, it has to work with what it has -- and in that sense, the little E Prototype is classic Honda: a clever, endearing, fun-to-drive car that should offer good value for money.

Given its still-strong engineering and design resources, it's a safe bet that Honda will be more than competitive in the new world of electric vehicles eventually. If it's priced aggressively, the production version of the E Prototype will give the company a foundation to build on while it moves closer to that 100%-electrified-in-Europe goal. We'll know more later this year.