Shares of Qutoutiao (NASDAQ:QTT) plummeted 20% on Wednesday after the company posted mixed financial results. The Chinese mobile content aggregator posted better-than-expected revenue for the fourth quarter, but it also cranked out a much larger quarterly deficit than what analysts were modeling.

Winning the battle on just one end of the income statement isn't going to win the war when you're one of the market's hottest stocks. Qutoutiao was one of the few stocks that had more than doubled so far this year ahead of Tuesday afternoon's financial update. Even after the post-earnings hit this week, the stock has still more than tripled since bottoming out at $4 in early December. A 20% hit in a single day is never fun when you're long a stock, but investors who have seen the shares tripling in just three months can't be smarting too badly after this week's slide. 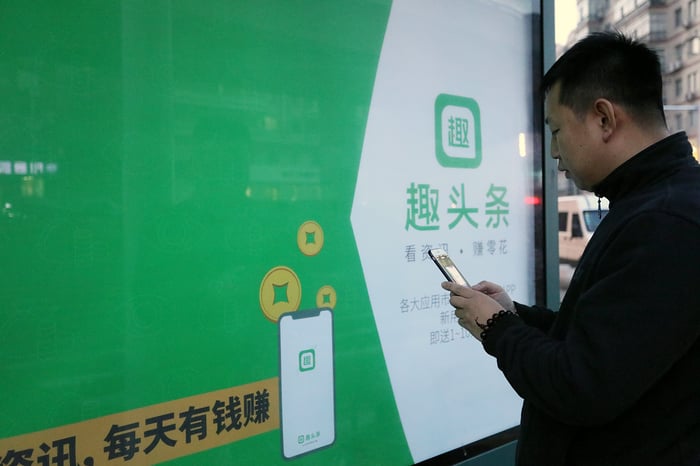 Qutoutiao is gaining traction in China with its mobile platform that uses artificial intelligence to aggregate articles and short videos in customized feeds. The name may be a mouthful for stateside investors, but it basically translates into "fun headlines" in Chinese. It also operates the Midu mobile app that's growing quickly as an ad-supported literature platform.

Net revenue soared 426% to $193 million in the fourth quarter, fueled by its rapidly growing audience and improving monetization skills. Average monthly active users during the quarter soared 286% to 93.8 million. Daily active users rose 224% to 30.9 million. Seeing the monthly count outpace the daily metric isn't ideal, but engagement remains strong. The average time spent on Qutoutiao by its daily active users has nearly doubled to 63 minutes over the past year.

The pin pricking this balloon is that Qutoutiao's red ink is growing even faster than its heady top-line results. Qutoutiao's adjusted loss soared nearly sevenfold to hit the U.S. equivalent of $53.5 million, or $0.22 a share. Wall Street pros were holding out for an adjusted loss of just $0.14 a share. The $199 million that it recorded in sales and marketing expenses offsets more than all of the quarter's revenue.

The stock remains a winner since going public at $7 six months ago, but it's been highly volatile along the way. Analysts at UBS and Deutsche Bank downgraded the stock in mid-February on valuation concerns, and a third Wall Street pro -- KeyBanc -- also downshifted to neutral on Thursday.

A company can't keep growing at a 426% clip forever. The guidance Qutoutiao initiated this week calls for 148% to 181% in revenue gains for all of 2019. That's still an impressive growth rate for a mobile content specialist, but we're at the point where it's going to have to take more than just top-line growth to keep the party going.