The factors currently limiting wider adoption of virtual reality aren't just cost, content, or quality of headsets. The core problem is that the industry has a problem packing enough computing power onto a headset to make the technology easily accessible.

A high-end VR system today requires a headset wired to a computer, which has an expensive graphics card (usually from NVIDIA), and trackers strategically placed in a room. All of that technology and the space required combine to make the cost, content, and quality hurdles for the industry.

Some of these barriers are coming down. Inside-out tracking (which eliminates external trackers) exists, but it only makes sense on a headset that doesn't have to be wired to a computer. And a headset that's untethered from a computer can't physically handle a modern graphics card. The cards are physically too big, they take too much power, and they'd overheat the device on people's heads.

Getting around this challenge is what's really holding VR back. But the answer may be here sooner than you think. 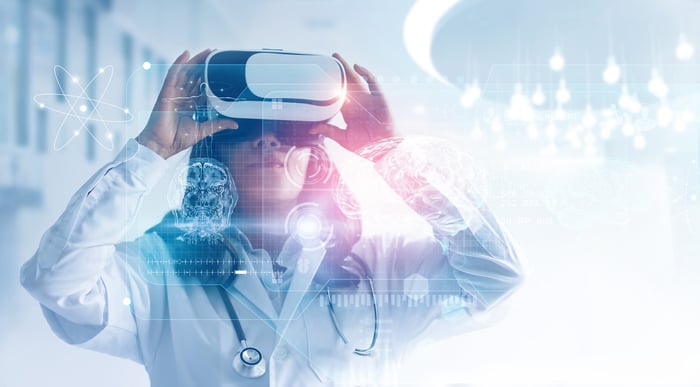 The holy grail for VR would be the ability to move both graphics card and computer chip to the cloud, and connect to them wirelessly. This would eliminate the need for a cord to a computer; trackers could be moved to the headset; and the weight and cost of headsets would come down dramatically. What's needed to get to cloud computing is a superfast connection to the graphics chips that wouldn't interfere with the VR experience. What we need is...5G.

Slowly but surely, Verizon, AT&T, and T-Mobile are building out the 5G networks that will provide the speed that cloud-based VR needs. From there, the industry has to build the technology to exploit that speed.

Some companies are already preparing to send some of the computing power to the cloud. Qualcomm (NASDAQ:QCOM) recently introduced an XR platform ("XR" -- extended reality -- encompasses virtual reality, augmented reality, and everything in between) that's built for mobile devices. It's developed an XR viewer, included in the Snapdragon 855, which smartphone manufacturers can use to tether to new headsets -- a concept much like that introduced by the HTC Cosmos. HTC says Cosmos can be tethered to a traditional VR-capable computer or run off a tethered smartphone, effectively making it a wireless device.

Built on Qualcomm's Snapdragon 855 platform is HTC's 5G Hub, which may be the centerpiece of the latter company's VR products. Up to 20 devices can connect to the hub, powering low-latency VR.

As 5G becomes part of the VR industry, I think we'll see far more headset manufacturers enter the industry. Right now, HTC and Facebook's Oculus dominate the top of the market, with Sony's Playstation and Microsoft's mixed reality offering lower quality, but also lower cost. They've created software platforms that connect to their headsets, allowing them to control the ecosystem somewhat. 5G will move the ecosystem to the cloud, making the headset itself a commodity.

In the future, headsets may not need to be connected to a specific physical platform; they could just connect to the cloud XR platform, with the headset being a content-delivery device. This could open up the industry to more types of headsets and content distribution models built on cloud computing.

Change is coming to VR

We don't know exactly how 5G will change VR and AR, but we know it will change them. Soon, having a high-powered computer and graphics card will be a thing of the past, and all users will need is a fast internet connection to render high-quality VR and AR content. And with companies like Qualcomm and HTC already building the 5G technology for the industry, we may be cloud-connected with headsets before we know it.