Intel, Activision Blizzard, and Hanesbrands could be easy layups for investors.

Wall Street is 10 years into a bull market, which makes it more challenging to find stocks that offer multibagger potential. But today I'm going to tell you about three stocks -- Intel (INTC -0.57%), Activision Blizzard (ATVI 0.35%), and Hanesbrands (HBI 0.49%) -- that all have the potential to double in value within the next five years.

If you had invested in Intel and Activision stock five years ago, you would be sitting on more than a 100% gain on your investment. I think both of those stocks will double again. As for Hanesbrands, the apparel company is growing, but you wouldn't know it by looking at the stock's cheap valuation. 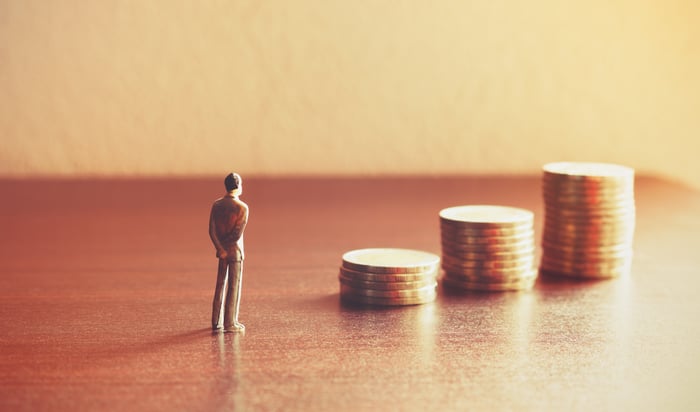 One reason I'm confident in Intel is that it managed to deliver good enough results to propel its stock 114% higher over the last five years, during a period of declining PC shipments. Now, Intel doesn't have to worry as much about PC demand because it's in a great position to benefit from the explosion of data -- its data-centric businesses provide 46% of its total revenue. The stock is cheap by the standard valuation measures, and the future looks brighter than ever for the chip giant.

Over the last 10 years, Intel stock has never had a forward P/E ratio above 12 or so. The stock currently trades at a forward P/E of 11.3. It's always looked inexpensive, but that's probably why the stock has outperformed the S&P 500 index over the last decade, and may continue to over the next.

Intel has made some mistakes, such as missing out on the shift to mobile computing several years ago. It's experiencing another misstep right now as production issues delay its new 10-nanometer chip, but the company still reported a solid fourth quarter in which revenue and earnings rose 9% and 18%, respectively, year over year.

What's more, Intel is a great dividend stock. It currently yields 2.37%, and distributes only about a quarter of its earnings. The  market is not giving Intel the credit it deserves, but that situation may not last long.

Check out the latest earnings call transcript for Intel, Activision Blizzard, and Hanesbrands.

A gaming giant on sale

Activision Blizzard is one of the leading video game makers in the world. Its notable franchises include Call of Duty, Overwatch, World of Warcraft, and the mobile game Candy Crush. In 2018, the company generated $7.5 billion in revenue and $1.66 billion in free cash flow. However, the stock is down 43% over the last year, largely because player engagement and revenue from digitally delivered in-game content didn't meet expectations.

Activision Blizzard stock was riding high to start 2018. Esports was making headlines, and Activision has the marquee esports competition in the Overwatch League, which just started its second season. But the story shifted during the third-quarter earnings conference call, when the company reported weak engagement for some games. Expectations for near-term growth plummeted, which caused the stock's valuation to drop to a more attractive forward P/E ratio of 16.

This is a perfect time to buy Activision Blizzard stock. The company is investing more in its game development teams to add more content to its flagship titles to get player engagement and in-game spending back to healthy levels. As someone who has played Overwatch and seen how slowly new content has been rolling out lately, I think this move will pay off in the next year.

Also, Activision's esports initiatives are progressing nicely. Coca-Cola recently jumped on board as a sponsor of Overwatch League, and  plans are in the  works for a Call of Duty league.

Activision is just getting started on its plans to pursue growth in the fastest-growing areas of the video game industry, including esports and mobile games. Investors should consider buying shares now before better news sends the stock higher.

Back in December, I highlighted the opportunity that Hanesbrands had to claw its way out of the bargain bin on the back of robust growth from its Champion athleisure brand. The latest quarterly results show that not only has Champion maintained its momentum, but the rest of the business improving, too.

Hanesbrands reported its best fourth-quarter performance in four years. Organic sales were up 6% (excluding changes in currency conversion rates), adjusted (non-GAAP) operating profit increased 10%, and adjusted earnings per share rose 3%. Those are not high growth rates, but given that Hanesbrands stock trades for a low forward P/E of 10.4, the company won't have to grow much to push its stock higher.

Once again, the Champion brand stood out with sales growth (excluding sales to mass retailers) accelerating to 50% year over year last quarter. This growth rate reflects sales at specialty athletic stores, college bookstores, and company-owned Champion stores. That's where the growth is, as the mass-retail channel has been suffering due to a number of chains' store closures, and the recent bankruptcy of Sears Holdings.

Management is making a significant effort to grow the Champion brand internationally, and it's working. Sales are expected to grow at a double-digit rate every quarter in 2019. The company's forecast for the year is for sales growth of approximately 2% and adjusted earnings-per-share growth of 3%.

What's more, there's a lot of room for improvement with Champion. Its website is not as sophisticated as those of other athletic brands, and the company could benefit from putting additional resources into marketing. Management plans to step up its investment on both fronts.

All in all, Hanesbrands' recent growth and outlook don't point to a business in decline, but rather to a brand that's still growing. The stock dividend yields a generous 3.15%, and the payout represents about 40% of earnings, which makes easily it sustainable. With a low valuation, a growing business, and a nice dividend yield to boot, it's only a matter of time before investors adjust their expectations and send the stock higher.