Please ensure Javascript is enabled for purposes of website accessibility
Log In Help Join The Motley Fool
Free Article Join Over 1 Million Premium Members And Get More In-Depth Stock Guidance and Research
By Matthew DiLallo – Updated Apr 13, 2019 at 9:59AM

If you judge the S&P 500 companies against these criteria for strong investments, the natural gas pipeline giant is the only one to fully make the grade.

Kinder Morgan (KMI 2.92%) has come a long way over the past few years. The natural gas pipeline giant sold several assets to shore up its balance sheet so that it could fund a growing list of high-return expansion projects. With its finances back on solid ground, the company was able to return to growth mode last year -- a phase that should continue for at least the next couple of years.

It has has made so much progress, in fact, that it has become a one-of-kind investment opportunity: Its management team points out that if you judge every company in the S&P 500 on a half-dozen criteria regarding size, financial strength, dividend yield, and visible growth, filtering out those that don't hit the mark, your list narrows to one: Kinder Morgan. Between that and its attractive stock valuation, the company is one of the more compelling buying opportunities in the market today. 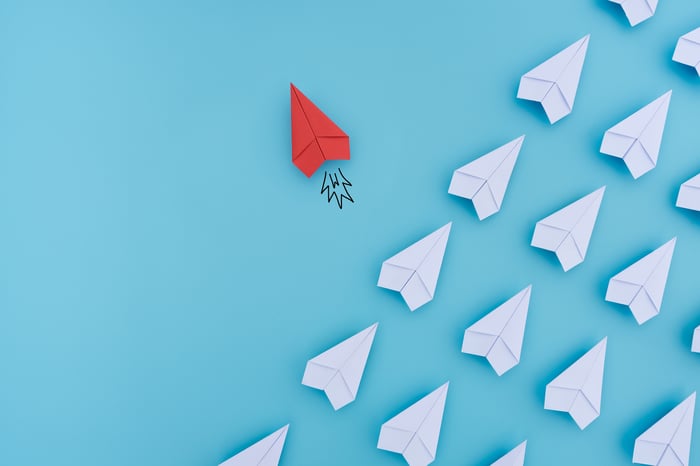 Rising to the top

In a recent investor presentation, Kinder Morgan compared itself with its fellow S&P 500 members based on six criteria, starting with leverage. It's one of the 409 companies in the index with a net-debt-to-2019-estimated-EBITDA ratio of less than 5.0. In Kinder Morgan's case, its leverage ratio should be around 4.5 this year.

Narrow the field still further to companies that also have an investment-grade credit rating, and it's one of 298 remaining.  In fact, Kinder Morgan recently received a credit rating upgrade that put it two notches into investment-grade territory, which will reduce its borrowing costs and increase its access to capital.

Among those 298 financially sound companies, only 124 have market capitalizations greater than $35 billion. That large size is noteworthy because it's harder for big companies to grow at fast rates. That point is particularly evident when the field is narrowed to the ones that are on track to expand their earnings per share at a greater than 15% compound annual growth rate (CAGR) from 2018 through 2020. Only 21 of those large companies -- including Kinder Morgan -- fit the bill.

Next, consider dividend yields. Only three meet all the above criteria and have a payout yielding more than 4%. However, what makes Kinder Morgan unique even among those three is that it's the only fast-growing, large-cap, low-leverage, investment-grade company that not only offers a high-yield dividend, but expects to grow its payout at a rapid rate -- it's is on track to increase its payout by a more than 20% CAGR over the 2018 to 2020 time frame. Overall, the company expects to expand its payout 25% this year and next, on top of last year's impressive 60% increase.

All this for an attractive price

Typically, companies that boast solid financial profiles and fast-paced earnings growth trade at premium valuations compared to peers. However, that's not the case with Kinder Morgan. It currently trades at an enterprise-value-to-estimated-2019-EBITDA multiple of 10.4, which is a 12% discount to the market's average multiple of 11.8 . That suggests Kinder Morgan's stock has meaningful upside potential, not only as its valuation improves closer to the peer group average, but as investors eventually reward it with the premium it deserves given its top-tier metrics.

And the company has more upside potential beyond narrowing the valuation gap. It has several expansion projects in development that position it for healthy growth beyond next year. As it secures and builds those projects, they'll give it the cash flow to continue increasing its dividend at a meaningful clip, which could potentially give it the fuel to deliver market-beating returns.

Kinder Morgan stands out from all the other stocks in the S&P 500 because it's the only large-cap company that boasts such a strong financial profile, high dividend yield, and healthy earnings and dividend growth prospects. Even better, investors today can get that compelling combination for a discounted price. That's why Kinder Morgan's stock still looks like a great buy even after bouncing back sharply this year.