These three stocks are all trading at reasonable, or unreasonably low, valuations today.

Interest in value investing seems to wax and wane over time. When the market is in a frenzy and high-growth companies are soaring, value investing certainly loses its luster. Coincidentally, it's time like this that investors should be seeking out some of the great companies that are out of favor for one reason or another and are selling at cheaper prices. Finding stock bargains like this can do a lot for a portfolio when the market's enthusiasm starts to run out.

So we asked three Motley Fool contributors to each highlight a stock they see as a great value investment today. Here's why they picked Walmart (WMT 0.29%), Bank of America (BAC -0.14%), and Cleveland-Cliffs (CLF -2.24%). 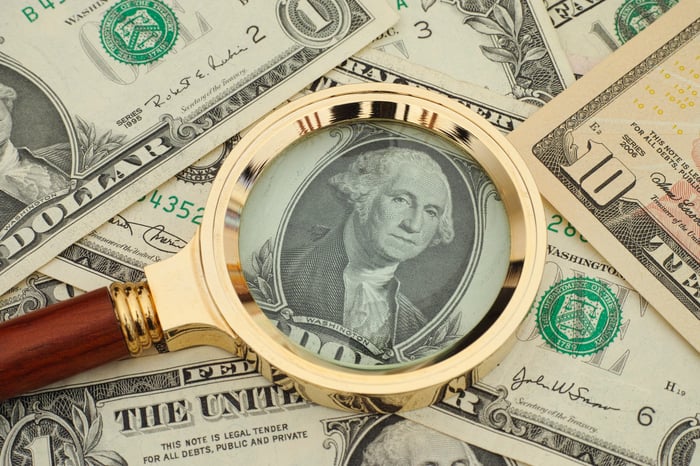 Brian Stoffel (Walmart): I am not a value investor, nor do I own shares of Walmart -- so do your own due diligence before taking my advice too seriously. But if I were a value investor, Walmart would be at the top of my list.

There are two big reasons for this: The company's transition toward a coherent e-commerce strategy has been far more successful than I thought possible, and the company's stock price is attractive. Let's tackle those one at a time.

In 2016, Walmart paid $3 billion for Jet.com and for its founder, Marc Lore, to jump-start Walmart's e-commerce ambitions. The results have been fantastic: Walmart's e-commerce growth was not only above 30% for 2018, but it accelerated as the year went on. The company has clearly found a way to leverage its brick-and-mortar locations back into an asset.

Next is the price tag. Over the past 12 months, Walmart has brought in $17.4 billion in free cash flow. The company's dividend -- currently yielding a modest 2.1% -- took up just 35% of that cash flow. That means the dividend is both very safe and has lots of room to grow.

Furthermore, while Walmart currently sports a P/E over 40 -- out of the "value" range for most investors -- its price-to-free-cash-flow ratio is a much more reasonable 16. Buying shares now gives you exposure to a fair-value, sustainable dividend and growing e-commerce player.

Check out the latest earnings call transcripts for Walmart, Bank of America, and Cleveland-Cliffs.

Value you can bank on

Sean Williams (Bank of America): Although the words "love" and "bank" are rarely ever put in the same sentence together, it's pretty easy to love Bank of America if you're a value-seeking investor.

A decade ago, Bank of America was a disaster. Its acquisition of Countrywide Financial would lead to tens of billions in mortgage-related settlements with the Justice Department, and in 2011 B of A would get into hot water with its customers by trying to pass along a monthly debit-card usage fee. Thankfully, this is all ancient history, especially considering that banking customers tend to forgive and forget rather quickly.

Today's Bank of America is considerably better capitalized to handle a substantial downturn in the economy. With one-time settlements in the rearview mirror, it's had little issue passing the Federal Reserve's annual stress tests, and has been given full clearance by the Fed to return substantial amounts of capital to investors in the form of share buybacks and increased quarterly dividends.

One factor working in Bank of America's favor is its interest rate sensitivity. Arguably no money center bank has been more closely tied to the Fed's monetary tightening than B of A. Between 2015 and 2018, net interest income has risen from $38.96 billion to $47.43 billion. With the U.S. economy still on track, there's little evidence to suggest that lending rates are going to drop anytime soon.

At the same time, Bank of America has done a bang-up job of reducing noninterest expenses by more than $4.2 billion since 2015. As the banking landscape has evolved, B of A has reduced its physical presence while emphasizing its digital apps. Presumably, with total deposits growing from $1.16 trillion in 2015 to $1.31 trillion in 2018, it's doing a good job of relating to its retail customers, and especially the millennial generation.

Altogether, Bank of America's forward price-to-earnings ratio (for fiscal 2020) of 8.9 is its lowest point (save for a short-lived decline in the fourth quarter of last year) since 2010. Combine this with the greatest investor on earth, Warren Buffett, enlarging his position in B of A during the fourth quarter to nearly 900 million shares (about $25.6 billion in market value), and you have an exceptionally intriguing and attractive value in plain sight in the banking sector. 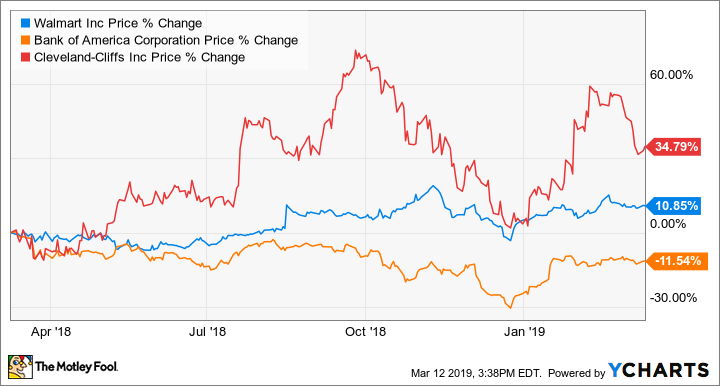 Still cheap after all these changes

Tyler Crowe (Cleveland-Cliffs): Cleveland-Cliffs has undergone a lot of changes over the past several years, and it has most definitely been for the benefit of shareholders. The company has spent the past several years repairing the damage done by the previous management team that made several ill-advised investments outside of its core business of producing iron ore in the United States. After several divestitures and outright closures of operations, the company has reestablished itself as a profitable producer of high-quality iron ore to supply North American steel mills.

At the same time, the company has done a spectacular job of cleaning up the balance sheet. It wasn't too long ago that bankruptcy looked all but inevitable, but since then the company has reduced its debt to a much more manageable level. Its debt-to-EBITDA ratio is 3.2 times. That's still a little high, but it is well down from its peak of nine times, and Cleveland-Cliffs has more than $800 million in cash on the balance sheet should the iron ore market go through a rough patch.

Thanks to Cleveland-Cliffs' lower cost production and some geographic advantages, it's generating some rather hefty profits today. The EBITDA margin for the past 12 months -- which strips out some one-time tax gains -- was just north of 29%. For a mining company, that's pretty impressive. That level of profitability has allowed management to pursue some new growth opportunities in upgraded raw iron products while also restoring its dividend, and even initiating a stock repurchase program.

Despite all of these changes that show the company is in much better shape financially and strategically, shares still trade at a price-to-earnings ratio of 2.7 times. Simply put, Cleveland-Cliffs is criminally undervalued and investors should take a look today.

3 Stocks With Growing Dividends for July