2017, in general, was a great year for just about everyone's stock portfolios. The S&P 500 grew 19.4%, which is quite the feat. As is the case in any market, some stocks did worse than that, but others did much, much better.

Three companies that stood out for some of our investing contributors were homebuilder NVR (NYSE:NVR), lithium miner FMC Corp (NYSE:FMC), and Bank of America (NYSE:BAC). These stocks saw their share prices grow by 25% or more in 2017, but here's why they think 2018 could be even better for these market-beating stocks. 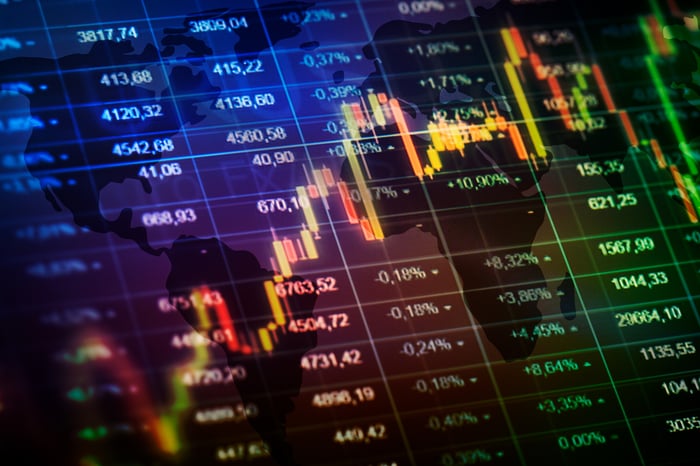 Still room to run in housing

Tyler Crowe (NVR): 2017 was a great year for homebuilders as just about every trend is working in favor of the housing market right now: Unemployment is low, the economy is growing at a good pace, interest rates are low but there is a fear of higher rates soon (which makes people want to buy now), and the largest age cohort since Baby Boomers -- Millenials -- are of home buying age. It also helps that housing starts have been well below historical averages for more than a decade, so there is lots of pent-up demand. Perhaps I'm being overly optimistic, but there aren't many signs out there that any of these trends will reverse in 2018, and that suggests homebuilders will have another great year ahead of them.

If you want a homebuilder stock to buy to invest in this trend, then NVR is one of your best bets. The company is incredibly unique in the homebuilder industry because it keeps a much lighter footprint than its peers. By using options contracts to buy finished lots rather than developing land themselves, it means less capital is tied up in the business at any given time. In the good times, that means higher returns on invested capital, and in the bad times, it means the company isn't stuck with a bunch of undesirable assets. It's no coincidence, then, that NVR was the only major homebuilder to remain profitable during the housing crisis.

Not only is the company asset-light, it is debt-light as well. With more cash on the books than debt outstanding -- almost unheard of in the homebuilding business -- the company delivers more of its operating income to the bottom line and creates wealth for shareholders with a propensity to buy back stock. Earnings results at NVR have been very strong lately, and it's likey that will continue for some time.

Maxx Chatsko (FMC Corp.): Lithium stocks absolutely crushed it in 2017 -- and shares of FMC Corp. were near the top of the peer group, posting gains of 67% for the year. Some of that leap was due to the giant acquisition of agricultural protection assets (namely insecticides) from DuPont in March, which helped it appease regulators and finally merge with Dow Chemical to form DowDuPont.

That said, the incredible growth of FMC Corp.'s lithium segment proved to be the dominant force driving the stock higher. In the first nine months of 2017 the segment's operating income swelled to nearly $83 million, marking a 69% increase from the year-ago period. It was also achieved on just $234 million in revenue. Most of that was derived from greatly increased selling prices in the market, although significant capacity expansions will begin to make their presence felt in 2018.

Put another way, lithium promises to push the stock to even greater heights in the near future. While improved operational performance alone likely would do the trick, FMC Corp. is readying the lithium segment for a spin-off into a separately traded company sometime this fall. That means shareholders will be able to enjoy growth from the core business (agricultural protection) and receive shares of the newly created FMC Lithium, which immediately will become one of the few pure-play lithium stocks on the market. 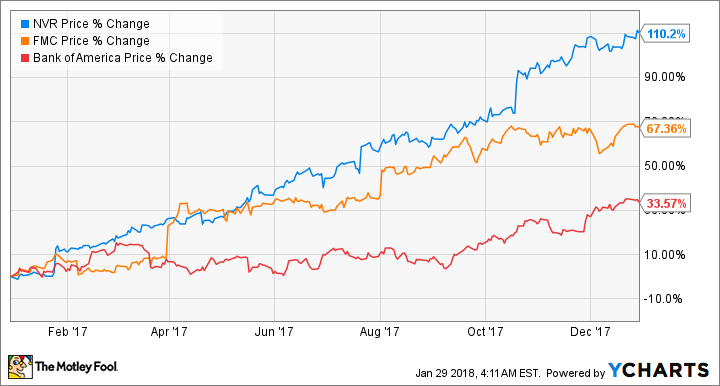 This bank stock could still have lots of upside ahead

Matt Frankel (Bank of America): The financial sector was one of the best-performing parts of the market in 2017, and Bank of America did better than most, up 34% for the year. And it's not hard to see why -- the bank's earnings, deposits, and loans all grew impressively, the net interest margin expanded, and Bank of America is running a more efficient operation.

However, there's reason to believe that there's even more upside potential in 2018. For one thing, the Federal Reserve is expected to raise interest rates at least three times this year, which generally translated to margin expansion for banks. Bank of America has the largest deposit base among the big U.S. banks, and its deposit cost is just 0.04% currently.

Tax reform should also be a big boost. Bank of America took a one-time hit to its fourth-quarter 2017 earnings due to tax reform, but 2018 should be a different story. The bank generally operates at an effective tax rate in the 30% ballpark, so the new 21% corporate tax rate could lift profits dramatically.

Additionally, Bank of America is likely to continue to shrink its physical footprint and continue to grow its digital and mobile platforms, which should lead to increased efficiency. Despite the strong performance, Bank of America trades for 17.5 times TTM earnings (excluding the tax reform charge), which looks quite reasonable when you consider all of these positive catalysts.