Shares of Cara Therapeutics (NASDAQ:CARA) jumped nearly 14% today after the company reported fourth-quarter and full-year 2018 operating results. As a pre-commercial pharma, there weren't too many financial metrics for investors to embrace aside from the fact the business entered 2019 with about $183 million in cash, cash equivalents, and marketable securities. That's equivalent to roughly 25% of the company's market cap, which is a healthy amount of capital.

More importantly, investors were reminded about a flurry of upcoming milestones expected in 2019. That list includes data from two phase 3 trials for the injectable formulation of its lead drug candidate, as well as data from a phase 2 trial of the oral formulation in the same patient population. Success could net Cara Therapeutics a big milestone payment from its development partner. 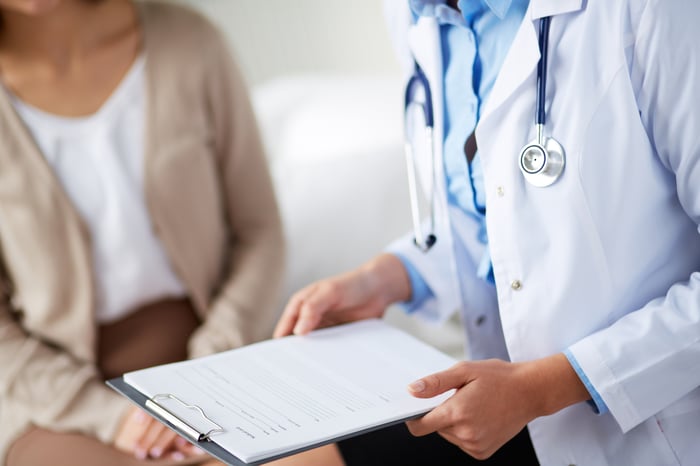 Cara Therapeutics has just one clinical asset: a selective opioid agonist called difelikefalin. It's being developed as a potential treatment for various ailments associated with opioid receptors spread throughout the human nervous system, namely itching and pain. Because it only targets one type of opioid receptor in human cells, it should avoid the problems of traditional synthetic opioid drugs including constipation, nausea, and addiction.

Difelikefalin, branded as Korsuva, is being developed as both an injection and an oral medication. The injectable formulation is the most advanced, and is currently in a phase 3 trial evaluating its potential to treat dialysis patients with chronic kidney disease-associated pruritus (CKD-aP). That's a technical term for itching. The oral formulation is being evaluated in a phase 2 trial for the same indication. Results for both formulations, spanning three clinical trials, are expected in 2019.

Vifor Fresenius Medical Care Renal Pharma (VFMCRP), a joint venture between Vifor Pharma Group and the largest dialysis provider in the world, Fresenius Medical Care, has partnered with Cara Therapeutics on the lead program. If the phase 3 trials for the injectable formulation prove successful, then the pharma company would be eligible to receive up to $470 million in milestone payments plus royalties on all sales. Considering the commercial partner operates dialysis centers across the United States and Europe, it shouldn't have a difficult time ramping sales if approved.

Check out the latest earnings call transcript for Cara Therapeutics.

It's easy to see why investors are excited about the potential for Cara Therapeutics to deliver big returns. The company trades at a market cap of under $800 million, but some analysts expect Korsuva to generate peak annual sales of around $500 million. That said, the recent Q4 2018 earnings conference call simply reiterated the timeline that was generally already known. In other words, investors will need to remain patient.