Please ensure Javascript is enabled for purposes of website accessibility
Log In Help Join The Motley Fool
Free Article Join Over 1 Million Premium Members And Get More In-Depth Stock Guidance and Research
By Rich Smith - Updated Apr 13, 2019 at 10:48AM

Two bearish analysts took Roku stock down yesterday. Can one bull save the stock?

Shares of Roku (ROKU 3.92%) got pummeled yesterday, falling 14% on top of the 5% loss they suffered on Tuesday. Blame for the stock's collapse is centering on two analyst downgrades from Loop Capital and Macquarie that criticized Roku's rapid rise and high share price, while at the same time highlighting rising risks to the business.

And yet, not all analysts agree. 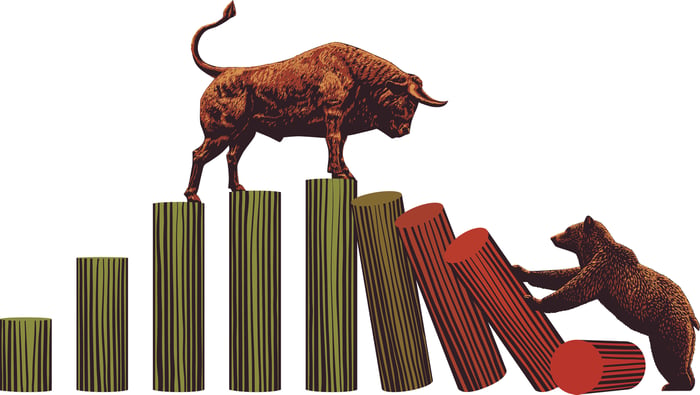 Time to tune into Roku?

This morning a third analyst is riding to Roku's defense: Needham & Co.

Needham is leaping on the opportunity presented by Roku's share price falling to $60 (the analyst had previously valued the stock at $65). In contrast to its peers, Needham takes the contrarian position that the same things Loop and Macquarie said made Roku worth less yesterday may make the stock worth more today, as reported in a note on SmarterAnalyst.com.

Let's start with the valuation.

Roku vs. Netflix: The valuation story

Both Loop and Macquarie criticized Roku stock's more-than-170% run-up over the last three months, with Macquarie calling Roku fully priced, and Loop calling its valuation "excessive." But when Needham looks at the stock in the context of a peer streaming play such as Netflix, the analyst actually sees considerable room for Roku to rise.

Here's how the math works:

Roku has no profits. It hasn't earned a full-year profit since it started up operations, according to S&P Global Market Intelligence, and analysts polled don't foresee the company earning a profit before 2021 at the earliest. This being the case, Needham had to pick a different measuring stick to use when estimating Roku stock's value -- and it lit upon the idea of valuing the stock on enterprise value to revenue.

Focusing on that latter number, Needham explains that peer streaming player Netflix sells for an EV/revenue ratio of 10. Were Roku stock to trade at a similar multiple to revenue, reasons Needham, shares would be worth more.

Now, Needham somehow comes up with a valuation of $80 a share, or 33% more than Roku stock costs today. But by my calculations, 10 times $1 billion in revenue should actually give Roku an EV of $10 billion, or more than a 50% increase from today's share price -- about $90. I can only guess -- Needham doesn't say -- that the analyst has tweaked its valuation to account for the fact that Netflix is profitable whereas Roku is not (and therefore Netflix is worth more). Assuming that's the rationale, it makes sense.

As does the upshot: Even after nearly tripling in stock price in three months, and even without profits, Roku stock could theoretically still be undervalued -- at least when compared to Netflix.

Now Needham's Roku report is a long one, extending over 22 pages, and we don't have time to capture the myriad data points addressed. Still, a couple bear mentioning. In downgrading Roku yesterday, both Loop and Macquarie highlighted competition to Roku's platform segment and its advertising business, citing plans by companies such as Disney and Apple to roll out new streaming services.

Needham, however, sees this development as a positive for Roku, not a negative. In the case of Apple, for example, the analyst argues Apple will likely make its streaming services available to Roku -- indeed, that Apple can't afford to ignore the market created by Roku's 27 million over-the-top streaming viewers -- because "AAPL wants its subscription services to be available to all consumers."

Needham extends this logic to Disney and AT&T (which owns HBO), predicting all three of these theoretical rivals to Roku's services will instead sign contracts and share revenue with Roku in order to gain access to its users. Whatever competition Roku may face in the future on the side of hardware sales (which carry only a 10% gross margin), this will be good news for the company's platform business -- which earns a gross margin that is "7x higher."

Needham makes a strong case that competitive threats to Roku's business are overblown, and that its valuation is not as extreme as it seems. Not to put too fine a point on it, Needham argues that Roku stock deserved to nearly triple in value in three short months, and indeed deserves to go up even more.

I have to admit, though, that for me this hard argument is to swallow. I agree with the analyst's arguments that Roku will continue to aggregate content on its platform, and that potential rivals such as Disney will play ball with Roku. That being said, just because Roku may successfully win partners, this doesn't mean these will be profitable partnerships for Roku -- at least not profitable enough to justify paying Needham's hypothetical 10 times revenue price.

When you get right down to it, I think Netflix stock is overvalued at present. Needham's valuation case for Roku basically boils down to "hey, it costs less than Netflix," but just being cheaper than Netflix doesn't necessarily make Roku stock cheap enough to buy.