You can lay the foundation for wealth-building gains with these three stocks.

The S&P 500 index delivered an average annual return of 10% from 1926 through 2016. You can do at least as well, if not better than that, by investing in great companies and letting time do its magic.

Where do you find great companies? Start with brands you already know that have a record of delivering consistent revenue growth and are profitable. Today, I'll tell you about three stocks that would be a good place to start: Mastercard (MA -0.60%), PepsiCo (PEP -0.41%), and Facebook (META -0.20%). 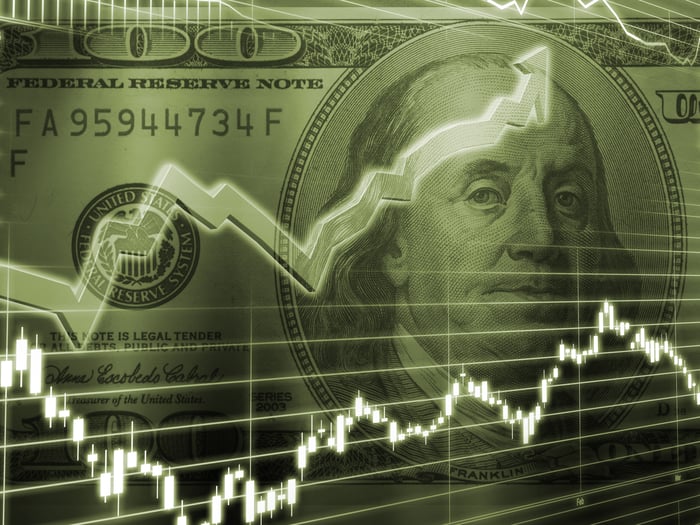 Mastercard has 2.5 billion cards (including Mastercard-branded cards and Maestro cards) in force around the world, and it makes money every time one of its cards is swiped at checkout. The power of the Mastercard brand and its massive transaction processing network has fueled wealth-building gains for shareholders, with the stock up more than 200% over the last five years.

The shares trade for more than 30 times the company's projected 2019 earnings, because of Mastercard's wide moat, consistent operating performance, and long growth runway. Over the last four years, revenue and earnings per share have increased by 58% and 81%, respectively. The company has grown revenue every year since its IPO, even during the tumultuous year of 2008, when consumer confidence was shaken.

Mastercard has momentum heading into 2019. After posting solid gains on the top line last year, the company has signed several new partnerships with banks and card issuers around the world. On the digital front, management has secured commitments from numerous major banks to issue contactless cards over the next two years. These issuers represent about two-thirds of Mastercard's volume.

Mobile payment leaders, such as PayPal Holdings, Apple Pay, and others, have partnered with top credit-card brands to make it easier to shop online or check out with the tap of a button at point-of-sale. Instead of being a potential headwind, digital payments represent a significant opportunity for Mastercard to maintain solid volume increases as mobile payments become more widely adopted.

Plus, as management continues to reinvest in technology, infrastructure, security, and other value-added services, Mastercard is widening its moat even further by raising its brand prestige and reputation with banks and issuers, in addition to consumers. For these reasons, Mastercard should be a dependable growth stock for decades to come, especially since cash and checks still comprise most transactions worldwide, presenting the company with a massive opportunity to convert those transactions to electronic ones. The stock currently trades for a forward P/E of 31 and its dividend yields 0.6%.

Check out the latest earnings call transcripts for Mastercard, PepsiCo, and Facebook.

A wide-moat beverage and snack-food powerhouse

You're not going to hit a home run with Pepsi stock, but it's a consistent performer that investors can rely on for growth and income. With dividends reinvested, the stock has delivered a total return of 65% over the last five years, which is in line with the return of the broader market.

Leading beverage and food companies have felt pressure in recent years from health-conscious politicos and consumers. This has likely dampened Pepsi's top-line growth, but the stock's return relative to the broader market is a testament to Pepsi's diversification and brand power across sugary sodas and good-for-you products.

Because of its scale and brands, the company has significant negotiating leverage with store owners, which gives Pepsi's brands superior shelf space compared to competing products. Pepsi is either No. 1 or No. 2 in market share in most of its key markets around the world.

Pepsi just acquired Israel-based SodaStream -- the fast-growing, do-it-yourself, carbonated drink maker -- which shows the company continuing to allocate capital in a way to diversify into niche categories that offer good growth prospects. The shares currently fetch a forward P/E of 21 and offer an above-average dividend yield of 3.2%.

Facebook is the world's largest social media company, with 2.7 billion monthly active users across the flagship Facebook app, Instagram, WhatsApp, and Messenger. Over the last five years, the stock is up 145%, as corporations continue to spend on digital ads: Facebook's main source of revenue.

Although advertising accounts for 98% of Facebook's revenue, the social media giant is a data-collection machine. That aspect of the business has put the company in a negative light recently. Collecting users' personal information is a sensitive business to be in, which is why Facebook has spent billions of dollars to shore up its security. These investments have pressured profits and are one reason the stock is down about 10% over the last year.

Growth is slowing, but Facebook still grew its revenue 37% last year, including a 30% year-over-year increase in the fourth quarter. Those are big numbers for a stock trading for 22 times its expected 2019 earnings. Plus, CEO Mark Zuckerberg pointed out that the company has been primarily focused on data and security issues over the last 18 months and hasn't spent enough time focusing on growth initiatives. That will begin to change in 2019.

Going forward, management plans to roll out new experiences that could reenergize the company again, including integrated messaging across its apps, payments on WhatsApp, growing the Watch feature on Facebook, and building commerce and shopping in Instagram.

Investors are already circling back to the stock again, with Facebook shares up 27% year to date. At a forward P/E of 22 and with analysts expecting earnings to grow 16% annually over the next five years, this is a great time to buy a great tech stock.